My son is currently in the process of seperation. According to him it was for failing room inspections. I'm sure he did, was late for appointments, and didn't follow regs like he needed to. The informationI have gotten from him is that will be considered a honorable discharge and he will not lose any of his accreditations. He also states in 6 months he can enlist again and choose a different career in the Navy. I hope he does. This is a difficult time for him and we'll as a us. I can hear it in his voice when we speak(once a week, for ten minutes because of his restrictions). Does anybody have any experience with this process?

Q. Can you give me information about why my recruit is being separated?

A. Due to the Privacy Act, we cannot give out personal information about a recruit, including the reason for their separation. For inquiries regarding a recruit’s separation, please contact the Recruit Training Command Legal Department at 847-688-4949, Option 1 and then Option 7.  If no one answers or it is after normal business hours, please leave a detailed message. Before any information can be disclosed to anyone besides your recruit, they must fill in an “Authorization to Release Privacy Act Protected Information” and specifically name the individuals to whom they wish to release the information.

Q. What are the most common reasons for separation from Navy?

Q. What are ASMO codes and what do they mean?

A. ASMO stands for Assignment Memorandum Order. These codes are the internal administrative process codes the Navy uses to track the assignment and movement of personnel onboard Recruit Training Command. Below are some commonly used codes at Ship 5:
a. 307 — Medical separation
b. 309 — Legal separation
c. 311 — Psychological separation
d. 333 — Failed urinalysis separation
e. 337 — Awaiting Non-Judicial Punishment (NJP, also known as Captain’s Mast)
f. 349 — Restriction or extra duty assignments awarded by the Commanding Officer at Captain’s Mast. This is a temporary code.
g. 350 — Medical Board separation

Q. What is the characterization of my recruit’s separation?

Q. Will the type of separation my recruit receives negatively impact their ability to obtain civilian or government employment or receive federal benefits (i.e. federally-subsidized loans)?

A. It is up to the company’s hiring authority whether to take into consideration any prior military service in their hiring decision.

Q. What are the main types of Re-entry Codes (RE) codes and what do they mean? 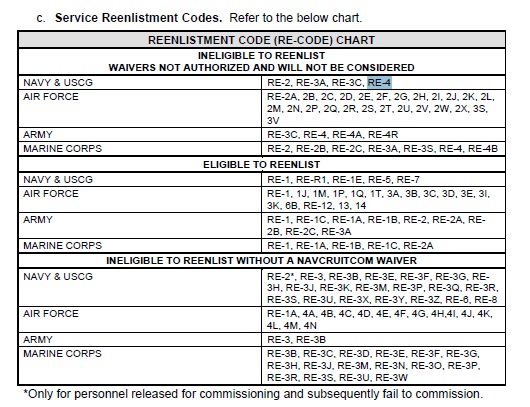 A. Pursuant to Bureau of Naval Personnel Instruction (BUPERSINST) 1900.8B, the following RE codes are most commonly used for Entry Level Separations:
a. RE-3B — Parenthood/Pregnancy/ Childbirth
b. RE-3E — Inducted/ Enlisted/Extended/ Reenlisted in error
c. RE-3F — Failed the physical fitness assessment (PFA)
d. RE-3G — Condition (not physical disability) interfering with performance of duty
e. RE-3H — Hardship/ Dependency
f. RE-3J — Failed entry level drug test, not drug dependent (must have disclosed at moment of truth, tested positive for marijuana only, and had been in DEP for less that 30 days)
g. RE-3R — Not meeting the professional growth criteria
h. RE-3X — Non-qualified swimmer
i. RE-4 — Ineligible for reenlistment
j. RE-8 — Temporary medical conditions or unsatisfactory initial performance and conduct

Q. Can the type of discharge or RE code be appealed?

I know most of that does not apply as it targets recruits , but he needs to be aware of re-entry codes to see if he is even eligible