Very Proud of my two Sailors and future Marine

New to the forum. Thought I would say hello and make a post.

I have 3 sons 21,20 and 17. My two oldest are currently in the Navy and my youngest is a couple weeks out from joining the Marine Corps. Looking around at most Gen Z kids these days, I just shake my head. However, could not be more proud of mine.

My oldest got out of boot camp and went to A school in Pensacola with AC rate ( Air Traffic control )  To my knowledge, it is one of the most difficult schools in the Navy. Almost a years worth of study crammed into 3 months. he started with 22 other students and halfway through only 8 were left.

When the class was over my son was awarded the Honor graduate which gave him and instant promotion to E4. He was then stationed at a large base in Southern California.

In Q4 of last year he was nominated for the Navy's Blue Jacket award. I am not going to explain what that is, if curious google it. Basically, 1 sailor is nominated for each quarter and 1 ends up winning the award. Well, you might have seen this coming, my son won it for 2021. This got him a promotion to E5 in just 18 months in the Navy. Maybe comment below if you know anyone to get to E5 in that time. For sure curious.

He is just weeks away from becoming a certified Tower Supervisor. Very, very few with an AC rate ever make it to that level. He was also given a Bravo Zulu for another event that happened while on duty.

He is currently getting his private pilots license and will work on a degree in aviation to become and officer and head to flight school. I am hoping he makes it to fly the F-22 Raptor. But is just me :)

My middle son finished boot camp and got stationed in Japan. His rate is AD ( Aircraft machinist )  He currently works on base on AH 60 helicopters. His ship is the Ron Regan when deployed.  Summer 2021 he deployed for 6 month dealing with the Afghanistan "withdrawal"  15 hours a day, but at night on the flight deck. 7 days a week. He said " Dad it was the hardest thing I have ever and may ever do, but it changed me. And now I know I can do anything"

He has been promoted to E4 and currently on a select assignment in another Asian country for about a month. Sometime next year he will deploy on the Blue Ridge for some amount of time. A great honor to be chosen to deploy on that ship.

I have one son left that as I mentioned and he is just a few weeks from finishing high school early so he can immediately ship out to bootcamp and live his dream as a Marine.

Needless to say you will be hard pressed to find a Navy Dad who is more proud of his sons.

God Bless America and the ones who defend it.

If you are just a parent of a teenager looking around and found this forum. I cannot stress enough how joining the military can and will change your son or daughter life for the better. They will come back a strong man or woman ready to take on whatever life throws at them!

Take care everyone! And thank you for your sons or daughters service!!!

Most excellent news! Bravo Zulu to your sons!

One of my two Navy sons is stationed in Japan. He is an AD. As one best in his squad he was chosen for a special exercise to fly over to one of Japan's friendly neighbors. It was a 9 hour trip by helicopter, but he got to come back on the C 130. He sat in the flight Engineers seat for most of the ride back to Japan. He said it was super awesome trip. 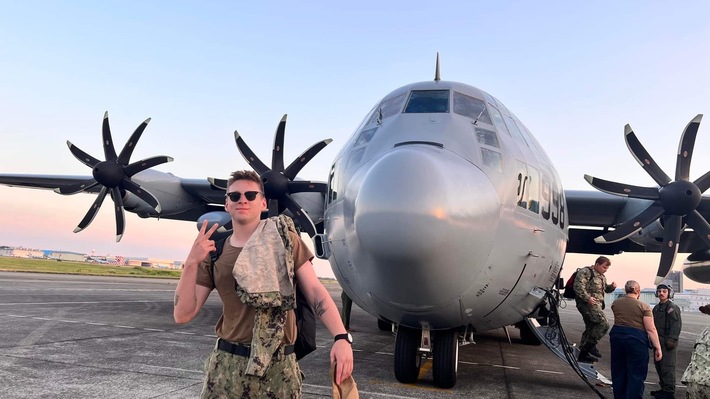 Two stories from sons in the Navy. One a bit serious, the other pure coolness of being overseas.

My 21 year old is and AC ( Air traffic control) based in Southern CA. He is just a few weeks away from qualifying as a Tower Supervisor. This story occurred last week.

If you are training to become a Navy pilot, you start in a Turbo prop single engine airplane. If you make it past that, you are upgraded to a T-45 jet engine airplane and begin your IFR training. This training is learning how to fly only by the gauges in the cockpit when vision is obscured by clouds or whatever. This training is done in Pensacola FLA where the weather is really good most of the time.

At a certain point you will fly out to Southern CA to practice carrier landings among other things. Last week my son was in the tower when 6 T-45's were coming into land at his field after training. As anyone who has been to CA would know, it is common for a marine layer or ocean fog to develop and come onshore. This day the marine layer was thick from ground level to 700'. In all commercial airports, they have what is called ILS. This instrument landing system is a digital signal pilots use to guide your flight directly to the runway even if the pilots cannot see the runway. However, on most military airfields they do not have this system. My son explained that this is due to security.

So, when conditions like this happen the tower control must "talk" the pilot all the way to the runway using radar vectors to give them very precise instructions. Typically, not a big deal at all with experienced pilots. However, the 6 pilots in the T-45 were quite fresh.

On the first attempt to guide them to the runway all 6 came in off course and had to do a go around. Not a big deal happens all the time. The problem came when they all were on their FIFTH attempt to land. All 6 of them missed the approach! At that time all 6 of them declared a Low Fuel Emergency, they had one last chance to land. My son saw that the fog was slightly lifting at the end of their other runway. They typically do not use this runway as much since to line up on it Navy pilots must fly through a commercial airports Bravo airspace. My boy made a quick call to the large airport's tower and told them of the situation and got emergency clearance to talk the 6 pilots through the Bravo to get lined up. At this point he could hear the 6 pilots were absolutely panicking. As one could imagine, they only had 2 - 3 mins of fuel left.

The result.... all 6 planes landed safe on their final attempt. I was very proud of my son for keeping his cool and being able to land 6 very stressed pilots who were seeing their lives possibly flash before them.

He said it was by far the most intense day he has had so far in the Navy.

My middle son is based in Japan. He absolutely loves life over there. Being that I used to work for a Japanese company and have been to Japan well over 40 times, I can understand why he likes it so much.

His favorite thing to do on his days off, is to pick a place on the map, get on trains and go check out this area.

I cannot remember the name of the town where this story takes place, but best described as a very small place where giant mountains meet the ocean. There is very little land area so this town has about 500 residents. He said as the train travels to this spot, as he is approaching the towns station, he is the only person left on the train. It is that remote. So remote in fact that the owner of the single small hotel was waiting to greet him outside as he walked up.

After settling in, he wandered out to find a place to eat a have a couple beers. The place he choose I can only describe and like " Cheeseburger in Paradise " on Maui, HI.  If you been there, this was similar. Over hanging the ocean with a beautiful view of the setting sun.

As he walked through the door the only 4 people in the place turned and he said the look on their face was the same as if an alien had just landed and walked in. There is absolutely Zero tourist in this town, especially not a 6'2 blonde, blue eyed American. As he sat at the bar and ordered a beer, one of the 4 Japanese people sitting there asked him ( in broken English ) " Where are you from? " He replied " America " Then they asked  " what state are you from? "  He replied " Texas "  The group of 4 eyes lit up and with a big smile he said " We are a Japanese Blue grass band do you know Blue grass music?"  He replied " Of course I do and I play the guitar"

As soon as they handed him a guitar, 4 great friends were made along with jamming out, singing, and of course a lot of drinking. They played for hours and hours.  They even invited him to come see their concert the next day a few towns over. And he went.

He told me this story over the phone and said " Dad, this had to be in the top three best experiences I have had so far in Japan"

Anyone else have some cool stories from your kids in the Navy? Love to hear them!