An Insignia and a Knife

For some the Goal is an Insignia and a Knife. Every year hundreds of young men join the Navy with the desire of becoming a US Navy SEAL. They attend Boot Camp like all Recruits but in conjunction with normal activities they rise each morning before the other Recruits and they complete a combination of running, swimming, pushups, pull-ups and additional assorted tasks, before going to breakfast with the rest of those in Boot Camp. They have a long day to say the least. If they pass all prerequisites, specialized curriculum, and required final Testing for Graduation of Boot Camp they will move across the Base to begin initial training. Pre-BUDS (Basic Underwater Demolition / SEAL). After weekly evaluations/testing and PT they complete the final evaluation, those who pass boarding a plane headed for Coronado, CA. Once there they begin BUDS Orientation to process more information about Special Ops, what is required, PT and classroom studies. This will last approximately 3 to 4 weeks. Successful completion of Orientation will allow them to enter BUDS. For the next 65 weeks or so plus Holidays the guys will train. (Phase I, II, III and SEAL Qualification Training). While the average Class begins with about 175 the final Graduating Class will only consist of approximately 40 - 45. Attrition absorbs around 80%. Those will either choose to DOR (Drop on Request), or be performance dropped and enter the Fleet. Others will be rolled back to incoming Classes due to injury or performance. A very small number of Graduates will achieve the actual goal of graduation with their original class number. At SQT Graduation the guy will become Special Warfare Operators and be assigned to their new Team (West Coast - Coronado, Calif. or East Coast - Little Creek, Va.). Each Graduate receives two things on that special day. First, one of the most respected Insignias in the world, a Navy SEAL Trident. As Paul wrote in his discussion The Golden Trident, each part of the Insignia has a meaning. The old style Anchor reminds us of the history of the Navy and even today we celebrate and remember Naval History. The Trident was the scepter of Neptune the King of the Oceans, to rule the water above and below the surface is a key factor when fighting. The Pistol reminds us that we must be able to come out of the water and stand our ground from the beach to the highest mountain, and the Pistol is cocked as a reminder that we must always be ready. Our Nation’s Emblem the Eagle is on the to of the Trident. With speed and accuracy the Eagle will find and snatch his prey. Unlike other Military Insignias’ his head is not up but down, show humility and respect, both of which are a measure of the strength of the warrior. The Trident is the only Warfare Specialty Pin that is the same for Officers and enlisted personnel. 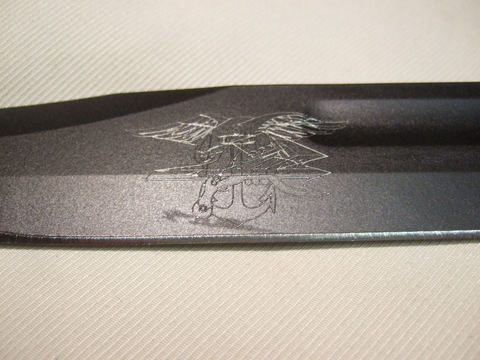 Second, a commemorative knife (Ceremonial Ka-Bar, pictured left) with a Trident stamped on the back of the blade; his SQT class #, the name of a fallen SEAL and where he was KIA on the front of the blade.) to honor the history and bravery of fallen Brothers. This Knife is rarely if ever carried into battle. It is heavy and cumbersome and unneeded dead weight to a SEAL plus it would ID the warrior as a US Navy SEAL, but the thought of having it will be in his heart no matter when or where the circumstances take him. Can you imagine the feeling of honoring your Brothers by mentally taking them back into battle with you? 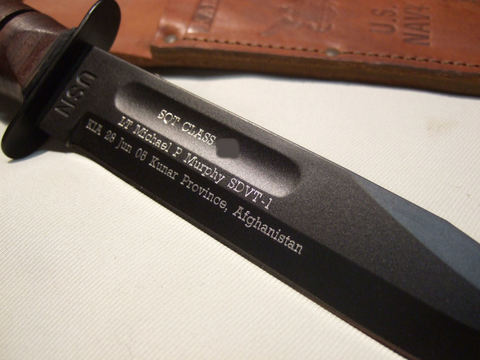 Michael Patrick Murphy (May 7, 1976 – June 28, 2005) was a United States Navy SEAL posthumously awarded the United States military's highest decoration, the Medal of Honor, for his actions in 2005 during the War in Afghanistan. He was the first person to be awarded the medal for actions in Afghanistan; and the first member of the U.S. Navy to receive the award since the Vietnam War. On May 7, 2011, on what would have been Michael Murphy's 35th birthday, the United States Navy honored him by christening the newest Alreigh Burke-Class Destroyer to the fleet, the USS Michael Murphy was christened by his mother Maureen Murphy, the ship's sponsor.