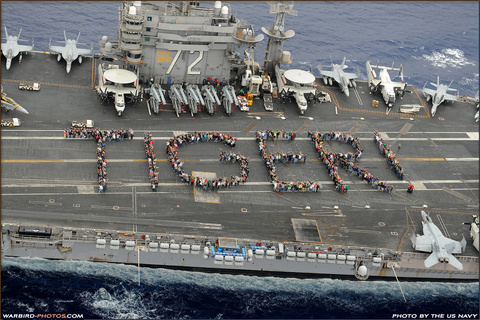 First and foremost, you are embarking on a warship, not a cruise ship. They are not designed for your comfort so be prepared for tight quarters and to be able to entertain yourself! There is no normal phone service, very limited Internet access and no cable TV. When you board the ship...TURN OFF YOUR CELL PHONE! Yes you will see crew members using their phones while in port or near shore, but remember they have been away from home for months, so cut them some slack.

I have been on 2 Tiger Cruises and a family day cruise on the USS Ronald Reagan (CVN-76) and there is much more that is not said. First, pack light, you probably have a long walk to and from the ship. Lugging heavy bulky suitcases up the entry stairs and gang plank, then up and down narrow stairways will prove the point of pack light. So leave the kitchen sink at home.

Knee-knockers yes, but also watch your head on hatch covers going up and down stairways. I have left skin from my head on the Reagan hatch covers and shin skin on knee knockers on the USS Missouri. It hurts! Last year in the Reagan Tiger cruise a Tiger fell down a stairwell and got several stitches in her forehead for her trouble (Lack of concentration I suspect) so pay attention to whats around you. I have seen people smacked by WTD (water tight doors) being opened from the other side from where you are going from. Close all WTD doors behind you! Pay attention.

If and when you are allowed on the flight deck, the crew will provide safety zones, stay in those areas.

Bring shower shoes, you don't want to know what could and probably is on the floor of the showers!

When passing an Officer in a gangway, move aside for them, its a sign of respect for them.

You probably wont wear as many clothes as you think you will, plus remember you already have the dirty clothes from your trip to the ship that you will be packing in your locker and carrying off the ship.

There is no use of cash on the ship, so put some money in your sponsors ship account so you can go to the ships store, get a soda or snacks from the machines etc.

There's plenty of food served on the ship, don't expect any cuisine, its all kind of bland. The salsa is the first thing to be used up. When finished eating, scrape your plate just like the crew members do, remember they are preparing many thousands of meals a day and the scullery crew doesn't have time to clean up after you. Watch your footing around the scullery areas, they can be fluids and or food spilled and slips can happen.

The ships store is not open like your local 7-11 and there can be lines waiting to get in when it is open. I suggest let the crew members go first, they are not on vacation and have someplace to be, so their time is limited for things like the ships store. Get used to PO3's and others getting in line in front of you, its the accepted practice on the ship, so show respect and say, you first.

Most importantly...don't fall off the ship, it takes over a mile to stop a Carrier and your head bobbing out in the ocean is a small target for aft watch to see and helo crews to come out and pluck your butt out of the ocean.

So have fun, be safe, pay attention and remember, your actions reflect directly on your sponsor.

Back to Tiger Cruise Group

Hi Leslie, I'm Going Down To Hawaii As Well To Greet The USS Carl Vinson & Go On The Tiger Cruise, Really Looking Forward To It, Can't Wait To See My Son Again Also, He's On His 2nd Tour On the Vinson,

I Will be In Hawaii  Early Also,

Send me a Message & Can Maybe Discuss The Trip,

Have a Great Weekend,

Hi - newbie to the forum here.  Because of a high school buddy who enlisted, I was fortunate to attend the TC on the Saratoga's last mission, June 1994, sailing from Bermuda to Mayport.  And I was fortunate a second time, boarding the Carl Vinson in Pearl Harbor and sailing to San Diego in November 1996.

I just wanted to say what a great article Mr. Dozier wrote on preparing for a Tiger Cruise.  Every word of it brought back memories from those experiences.  To that I would add, never be afraid to ask an officer or enlisted personnel questions (there are so many things for a civilian to learn), but always be polite, humble, and thank them frequently.

I was also fortunate that my friend was older and somewhat more mature than his crewmates, and he definitely schooled me in ship and Tiger etiquette ahead of time, so that I stayed safe and did not bring any embarrassment to him.

I believe that keeping a low profile definitely helped me on the Sara - my friend was working in Pri-Fly at the time, and wanted to bring me onto the LSO platform for the post-morning airshow landings, where he had duty that morning.  It was too crowded, people were jostling for space, and I hung back and told him I'd meet him later.  Apparently the LSO officer saw this and told my friend that I was to come back for the afternoon landings and stand next to the officer as his guest.  Wow - an unbelievable experience for someone who was never in the military.  I thanked the officer profusely afterward, believe me.

Yes, you learn quickly that an aircraft wing is just about level with your neck when you make a sudden turn in the lower hangar without checking first for obstacles.  And the food IS bland - not bad, just not seasoned much - but there's plenty of it, it's hot and nutritious, and boy, can they make some coffee!

It wasn't the Hilton, but I don't think I've had a finer vacation (except for the ones with my wife, of course) than my two TC's.   If you've never been before, my recommendation is to go with an open mind and open ears, and a closed mouth - and you'll never regret it.  And if you're like me, you'll have a whole new respect for the U.S. Navy.  Thanks for reading.

Permalink Reply by james brown on July 22, 2016 at 10:08am
Thanks very much for this insightful, valuable information. I go on my fist TC soon and am very excited. James

spend some time here and read the blogs:  http://www.navydads.com/group/tigerorfamilydaycruise/forum/topics/u...

Thanks very much for this insightful, valuable information. I go on my fist TC soon and am very excited. James