Religious Program Specialists provide support to Navy Chaplains in developing programs to meet the needs of Navy, Marine Corps, and Coast Guard personnel and their families. RPs perform functions that do not require ordination and they do not do pastoral counseling.

The duties performed by RPs include:

• supporting chaplains of all faiths and religious activities of the command;

• assisting in preparation of devotional and religious educational materials, and audiovisual displays;

• providing physical security for chaplains during field exercises and in combat environments;

• operating and maintaining libraries aboard ships and isolated duty stations;

• as custodians, rigging, and unrigging for religious activities;

People in this rating must possess a valid driver’s license, be able to type 30 words a minute, and understand that their work schedule may require duties to be performed in the evenings and on weekends and holidays.

Applicants should have no speech impediments, be able to express ideas clearly in speaking to others, do detailed work and repetitive tasks, and keep accurate records. Necessary qualities include an interest in people, writing skills, initiative, resourcefulness, and a knowledge of arithmetic.

Religious Program Specialists will be supportive of clergy and people of all faiths, set high standards, and be of good moral character.

RPs work in a variety of environments wherever chaplains are stationed with Navy and Marine Corps personnel.

While most of their work is performed indoors, it may also be performed on the deck of a ship, in the field with Marines, in a combat situation, or in a hospital. Navy Chaplains are noncombatants, but RPs are considered combatant and will receive combat training. RPs protect the chaplain and ensure his or her safety, particularly in combat areas.

About 400 men and women work in the RP rating. Qualified and self-motivated people have a good opportunity for entry into this rating.

Volunteers for the Religious Program Specialist (RP) rating do so with the understanding they will be required to be supportive of clergy and people of all faiths. They also understand their eligibility for the program will be reviewed at recruit training during chaplain’s screening interviews. If, during the interviews, they are found ineligible for the RP rating, they will have the following options:

• assignment in alternate training for which they are fully qualified;

(Males only) Applicants understand that in addition to assignment with Navy units, they will be eligible for combat training and assignments to serve as combatants in Marine Corps units.

(Females only) Applicants understand that in addition to assignment with Navy units, they will be eligible for Assignments in Marine Corps units. 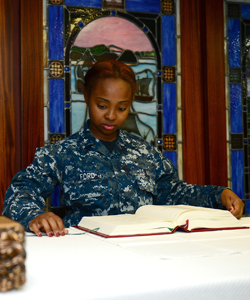