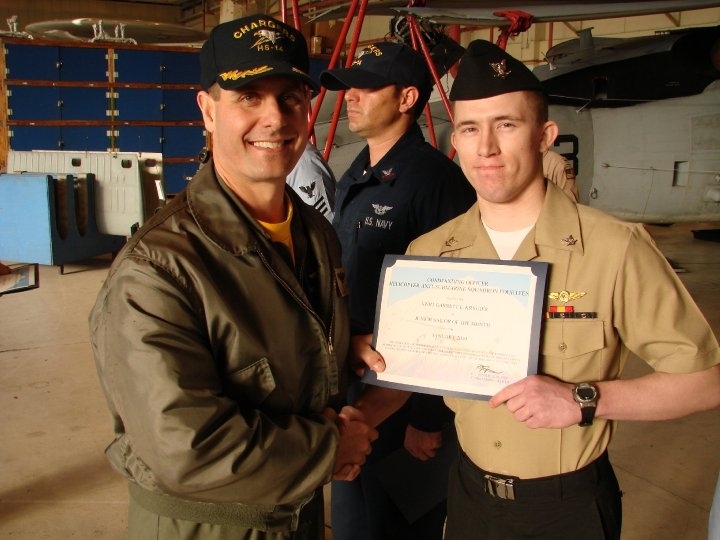 Garrett decided to join the Navy and become a Rescue Swimmer in early December 2006. He trained hard for swimming with his dad for 5 months until he went to GL on Memorial Day 2007.

Garrett was in Div 935 and graduated July 27, 2007 from Recruit Training Command.  Once at Pensacola for both Air Crew Candidate School (ACCS) and Rescue Swimmer School (RSS),
Garrett finally finished the grueling RSS by spring 2008 at the top of his class.  Having a choice of orders, he selected San Diego HS-10 for the FRAC training to earn his “wings”.  His proud father “pinned” his wings on December 10, 2008.  Again, with a choice of orders, he chose HS-14 at the
Atsugi Naval Air Base in Japan and to be a part of the only permanently forward deployed AirWing Five as part of the 7th fleet and the USS George Washington. In 2010, Garrett was awarded HS-14 Sailor of the Month for January.  His is a Petty Officer Third Class with a rate of AWR3 and was currently requested to be one of only four AW’s be a part of DET A for this summer’s deployment on the USS Cowpens.

Flying must be in Garrett’s genes because his Grandpa Ed was a fighter pilot in 1945 for the US Army Air Corp flying P-51’s, then F-80 and 84’s before leaving as a Lt just before Korea.

Garrett was born and raised in Orlando, Florida on October 28, 1986.  He has a best friend sister Valerie, who is 18 months younger and recently married to her high school sweetheart and a current 2nd LT in the Marines.  Garrett has two sets of parents that love him very much, his father Brad and step mom Diane and his mother Beth and step dad Randy.

Garrett loves wakeboarding, jet skiing, video games and is an avid Green Bay Packer fan!  He loves the adventure of seeing the Pacific rim as a part of his dream to serve his country and save the pilots who are putting their life on the line for him!

Permalink Reply by Cora on August 27, 2010 at 5:04am
Bravo Zulu Garrett!! Congrats on you being "Sailor of the Week" on Navydads!! We are so very proud of you and all your accomplishments! You have a bright future ahead of you and many great memories to be shared along the way!

Permalink Reply by Brad on August 27, 2010 at 12:30pm
Congratulations son! Also, congrats for passing your boards for the Enlisted Air Warfare Specialist siver wings yesterday! You are on you way to many more successes. As your dad, I couldn't be more proud!

Permalink Reply by Brad on August 27, 2010 at 1:13pm
Jim, thanks for your efforts. Great pic you chose! I would have done the same one. I appreciate that you would want to honor Garrett. Thank you!

It was really hard to figure out which picture to use for Garrett. So many good ones to choose! Bravo Zulu Garrett!

Permalink Reply by Deb Berthold on August 27, 2010 at 1:41pm
Congratulations Garrett. As I am sure you know, we are all very proud of you and "kick-butt" sailor you have become! XO

Permalink Reply by CCR on September 4, 2010 at 8:08pm
A treasured Photo to bring back many great memories in the years to come. Thank you for your great service to our country. Carol