The Special Warfare Combatant-craft Crewman (SWCC) program evolved from the PT Boat Sailors of WWII and the “Brown Water Navy” of Vietnam. They are specially trained to operate NSW mobility platforms and support Special Operations missions in maritime environments worldwide.

The Navy Challenge Program is the preferred method for qualifying under the Delayed Entry Program for the Special Warfare Boat Operator (SB) rating and accounts for the majority of SWCC applicants. Sailors may also volunteer for SWCC during Basic Training at Recruit Training Center (RTC), or at any time during their first six years of active duty, and prior to their 30th birthday or promotion to PO1. Entry into the program via this process is based on availability and selection cannot be guaranteed.

NSW/NSO “Dive” Motivators, at RTC, give presentations on the Navy's NSW/NSO programs. Guidance on suitability for assignment to SWCC and how to complete an application is located in the MILPERSMAN 1220-400.

SWCC operators are assigned to Special Boat Teams and operate NSW combatant-craft from a variety of fixed wing aircraft, helicopters, and Navy ships as insertion, extraction, and support platforms. SWCC operators may be deployed anywhere in the world and operate day or night in cold weather, desert, tropical or jungle environments. Some SWCC missions include working with and training foreign personnel in small boat handling and weapons training.

SWCC candidates should be motivated, self-assured and disciplined, willing to follow orders and able to work under stressful and hazardous conditions. SWCC training is physically and mentally demanding. They should be in excellent physical condition and motivated to withstand the rigorous physiological demands imposed by the maritime environment. The ability to swim and withstand fatigue is a major factor in successful completion of the Basic SWCC training. Special Warfare Combatant-Craft Crewman Boat Captains are responsible for their craft and personnel placed under them. The safety of all personnel assigned to and embarked on his craft are his primary responsibility. While underway he is responsible for the safe navigation of his craft in support of Navy Special Warfare Operations. Because of the complexity of systems and operational experience required for combatant craft operations, U. S. Navy Regulations Article 1033 and MILPERSMAN 1200-030 states that an exception to the Senior Officer Present Afloat (SOPA) rule is those craft authorized by the Chief of Naval Operations (CNO) to have a Petty Officer In Charge (POIC). In this instance, the petty officer retains positional authority and is responsible for the safety and management of the boat. This position possesses weapons release authority.

Special Warfare Combatant-Craft Crewman Patrol Officers are responsible for the detachment craft and personnel placed under his command. The safety of all personnel assigned to and embarked on his craft is his primary responsibility. Patrol officers are also responsible for signing for all weapons, ammunition, and classified/cryptographic material for the detachment. Prior to any evolution he will ensure all required navigational charts and materials are on board and corrected. He will brief the entire mission/plan to the detachment personnel and other pertinent forces prior to getting underway. While underway he is responsible for the safe navigation of his craft. Patrol Officers are granted special authority per U. S. Navy Regulations, article 1033 and MILPERSMAN 1200-030. A Patrol Officer retains responsibility and authority for their craft and is an exception to the SOPA rule.

SB is open to new recruits under the SWCC-Challenge Program. The SWCC Challenge Program Option guarantees the opportunity to enter the Naval Special Warfare/SWCC community for individuals desiring a 4-year USN enlistment. This option provides for entry into Class "A" School. Applicants must volunteer for diving duty to become eligible for all training pipelines offered in Special Operations.

Individuals can also volunteer for the program during basic training, or at any time during their career (up to age 30). 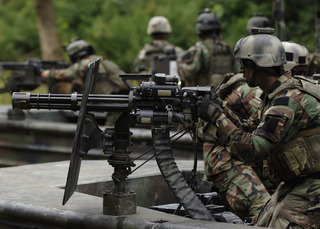 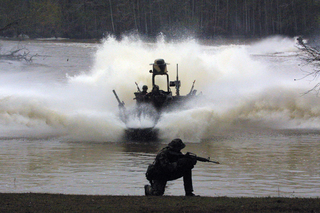