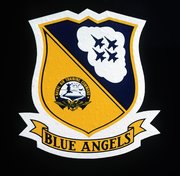 This group is for family members, friends and fans of the Blue Angels. Let's show our support for the greatest flight demonstration team in the world: the Blue Angels!

Is anybody planning to go to Rochester next month?

You need to be a member of Blue Angels to add comments! Blue Angels Flyover Navy-Notre Dame Game
Pilots assigned to the U.S. Navy Flight Demonstration Squadron, the Blue Angels, will perform a flyover prior to kick-off at the National Collegiate Athletic Association (NCAA) football game between the U.S. Naval Academy and the University of Notre Dame at Notre Dame Stadium in South Bend, Ind., Saturday, November 2, 2013.
For a few of the Blue Angel pilots, this flyover is an opportunity to cheer on their alma mater. Current Blue Angels who are Naval Academy grads include Commanding Officer and Flight Leader Cdr. Tom Frosch, Class of 1994, Lead Solo Pilot Lt. Cdr. David Tickle, Class of 2002, and Opposing Solo Pilot Lt. Mark Tedrow, Class of 2004. Flying in the #2 jet is Right Wing Pilot Lt. Cdr. John Hiltz, who is a 2002 alumnus of Notre Dame. As ambassadors of goodwill, the Blue Angels are an integral part of the Navy and Marine Corps recruiting and retention program. By publicly demonstrating the skills and abilities of naval aviators, the team helps attract many talented and ambitious young people to careers in the armed forces, while also projecting the pride, professionalism and teamwork found in the Navy and Marine Corps to millions of Americans each year.

The newly-selected2014 team members include:

Pre-selectedto join the 2014 team were:

Expectedto return for the 2014 season are:

The mission of the Blue Angels is toenhance Navy recruiting and credibly represent Navy and Marine Corps aviationto the United States and its Armed Forces to America and other countries asinternational ambassadors of good will.

Since its inception in 1946, the BlueAngels have performed for more than 484 million fans.

The Blues continue to fly Mon-Thurs in P'cola but not as a group.  They only launch 1 or 2 jets each time, just enough to keep people and planes certified, but they do fly over P'cola Beach sometimes and they still do PR appearances at the Museum.

David's tour will be up in November, as well as his Navy enlistment, so I'll be looking for someone to take over this group.  Anyone interested?