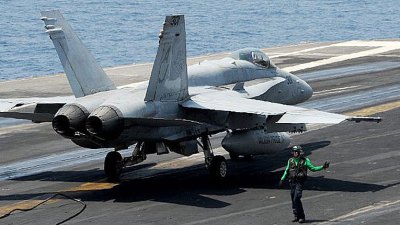 One pilot was rapidly located and returned to Carl Vinson, and is currently receiving medical attention. Search efforts continue for the second pilot.

The two F/A-18C Hornets have not been recovered. All remaining airborne aircraft were safely recovered onboard the Carl Vinson.

The cause of the incident is under investigation.

LEMOORE, CALIF. — Rescuers have called off their search in the Pacific Ocean for a Navy fighter pilot whose jet was one of two that crashed west of Wake Island.

The Navy said Saturday that it presumes the pilot is dead after failing to find him during a 36-hour search. The Navy declined to release the pilot's name pending notification of his family. The Navy said the crash is under investigation and didn't release any more details.

Two F/A-18C Hornets crashed about 5:40 p.m. local time about 250 miles west of Wake Island. The other pilot safely ejected, was rescued from the ocean by helicopter and was treated and released from medical facilities aboard the aircraft carrier Carl Vinson.

The pilots and their squadron are from Carrier Air Wing 17 based at Naval Air Station Lemoore in California's San Joaquin Valley.