A group for family members and friends aboard the Mighty Rushmore...

USS RUSHMORE is the 7th of 8 ships in the WHIDBEY ISLAND Class. This ship’s mission is to embark Marines with their combat
equipment and vehicles, then remain at sea as an on-call force to conduct a diverse range of amphibious operations such as:
training with international partners, providing humanitarian assistance or disaster relief, executing noncombatant evacuation,
and assaulting a hostile shore. In times of both war and peace, these missions are highly relevant to the
U.S. Navy and Marine Corps Cooperative Maritime Strategy.

RUSHMORE is designed primarily to embark and operate Landing Craft Air Cushion (LCAC) assault hovercraft, which are able up to
carry a 60-ton payload and travel at speeds in excess of 40 knots. Using this versatile craft, RUSHMORE can conduct
amphibious operations across a wider range of the world’s beaches and at much greater distances than previous
generations of amphibious ships and conventional landing craft.

Officially designated a Landing Ship Dock (LSD), RUSHMORE accomplishes her mission through the use of a well deck and ballasting system to enable the loading, launching and recovery of landing craft. After departing the ship, assault craft are directed to shore by the ship’s Combat Information Center (CIC). The ship has robust command, control, and communications equipment. It carries electronic warfare suite and surface-to-air missile launchers to protect from anti-ship cruise missile attack. It also carries a variety of machine guns for self-defense against surface threats. Using its own small boats and Visit, Board, Search, and Seizure (VBSS) teams, RUSHMORE can also conduct Maritime Security Operations, such as anti-piracy and maritime surveillance.

The ship has a crew of approximately 300 and is organized into six departments: Operations, Deck, Engineering, Supply, Medical, and Executive.

Commissioning ceremonies were held on June 1, 1991 along the banks of the Mississippi River at the River Walk in New Orleans.

You need to be a member of USS Rushmore (LSD 47) to add comments! 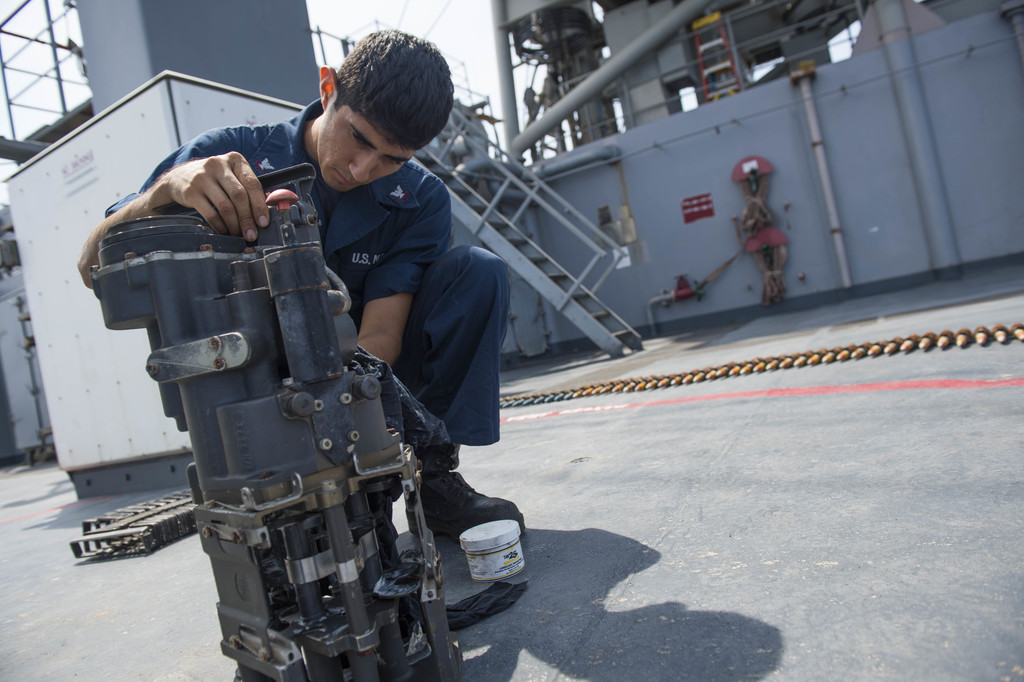 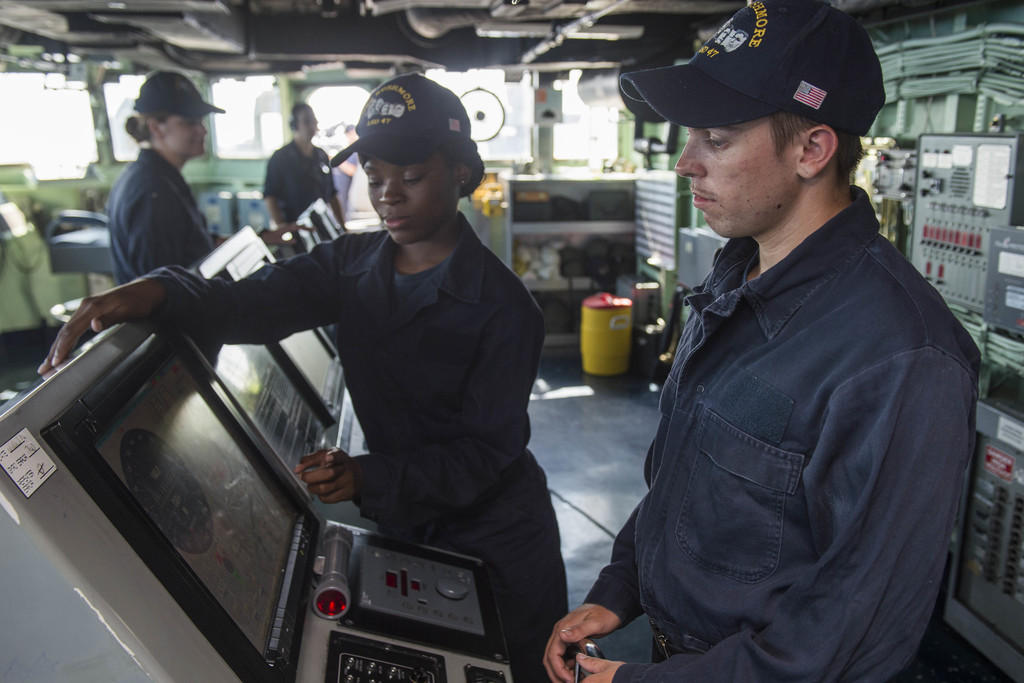 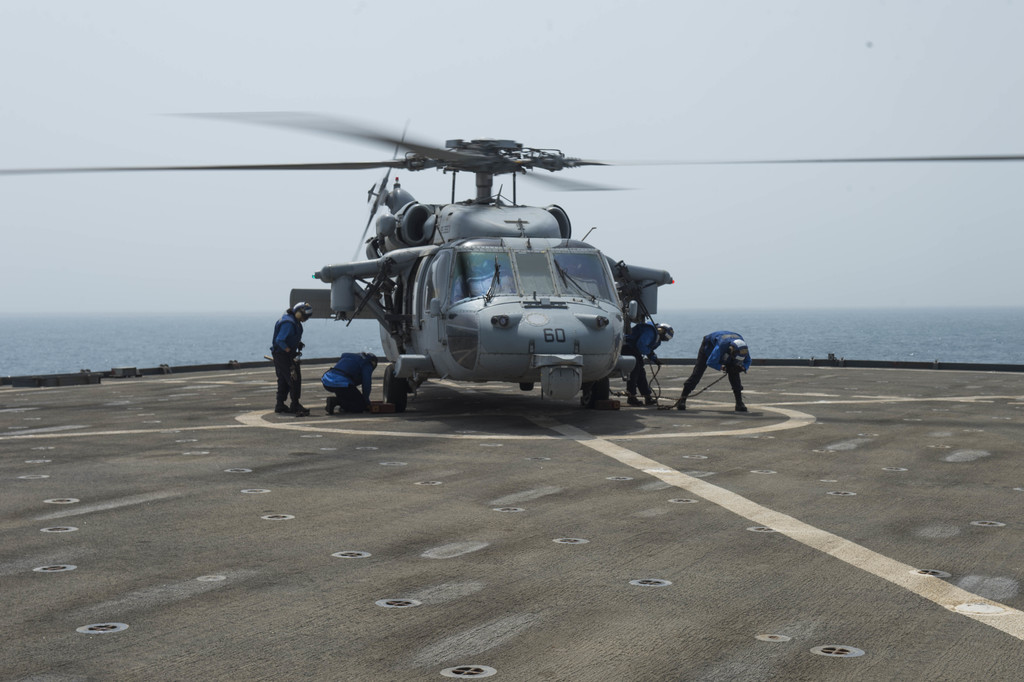 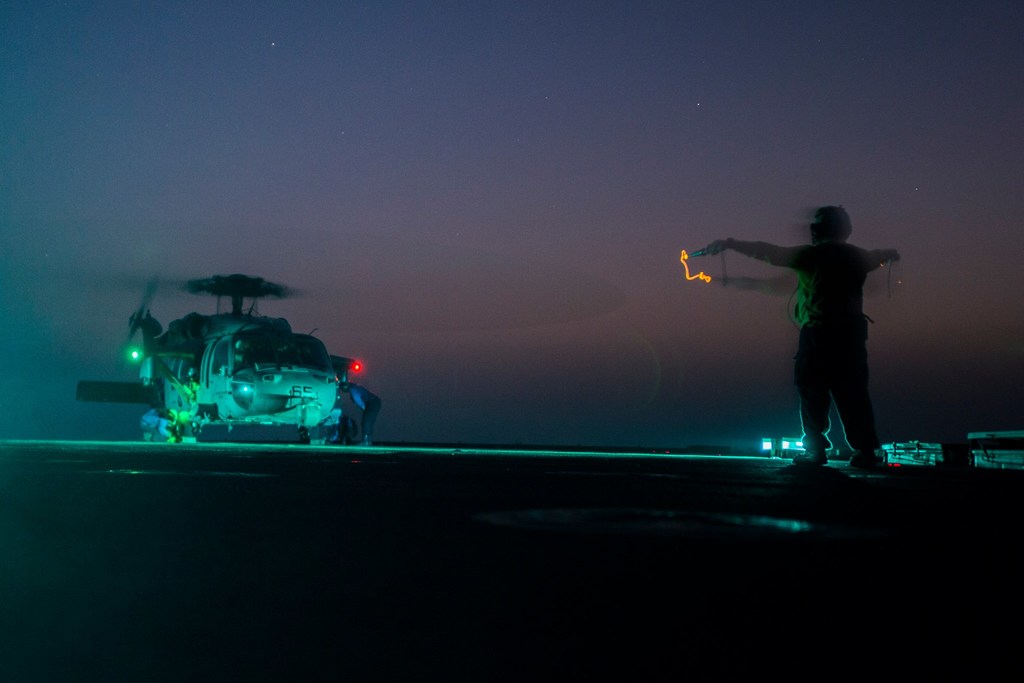 More from deck landing qualifications! Shout out to Deck Department for all the work put in over the past few days..

Please don't post about your Sailor's or Marine's plans in port, Rushmore's departure/arrival dates, or potential future port visits. Help us keep them safe. As always, thank you so much for your support! 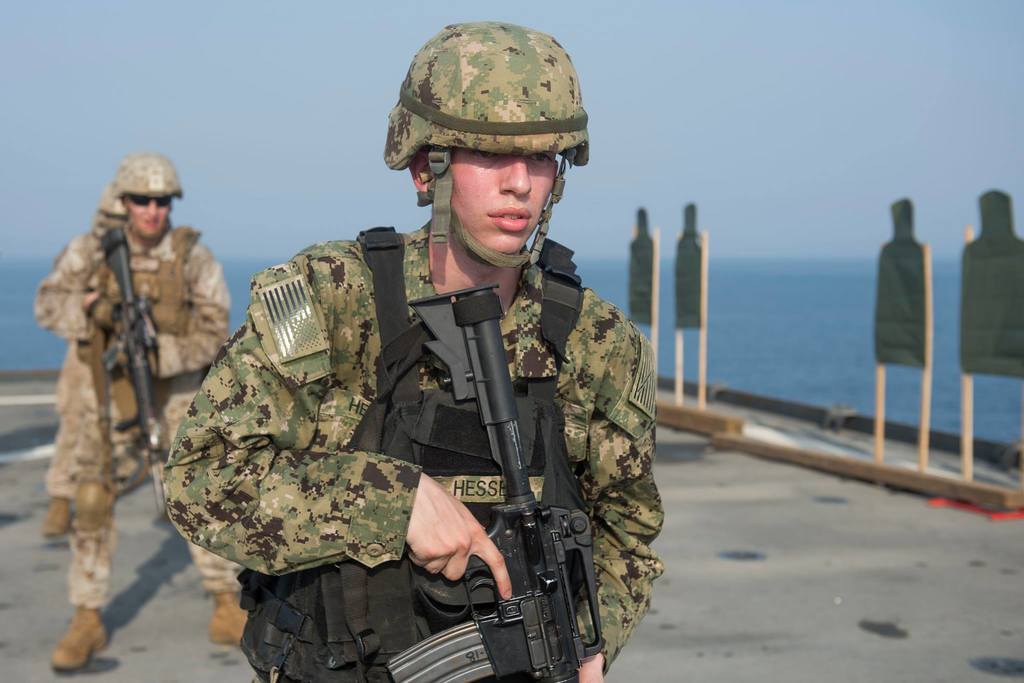 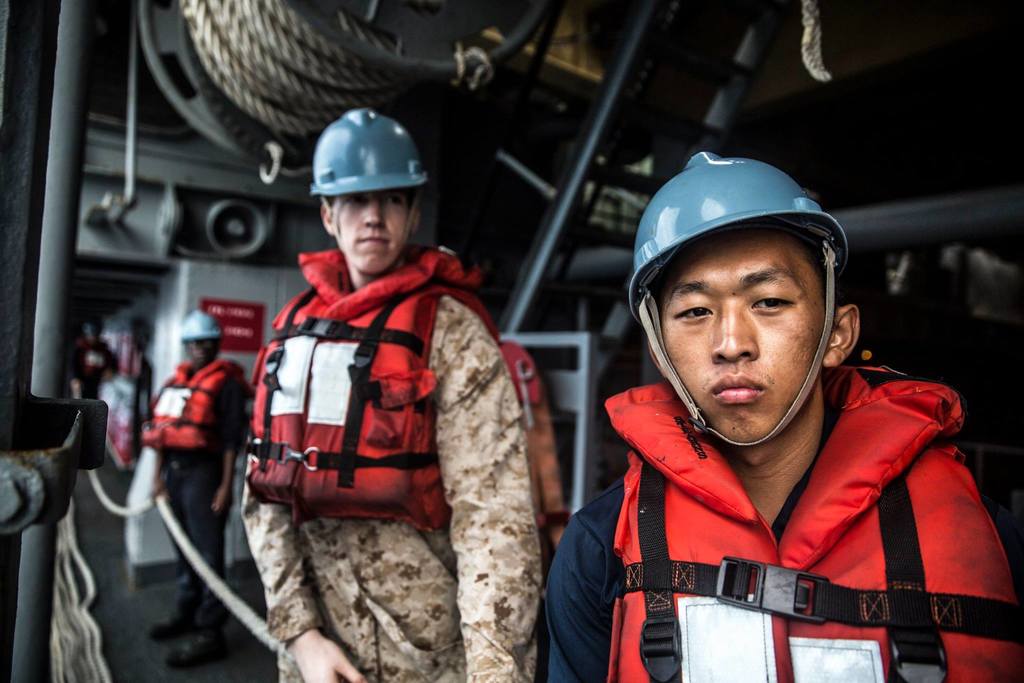 July 2, 2015 - Seaman Yang and LCpl. Taylor putting in work during an underway replenishment.. 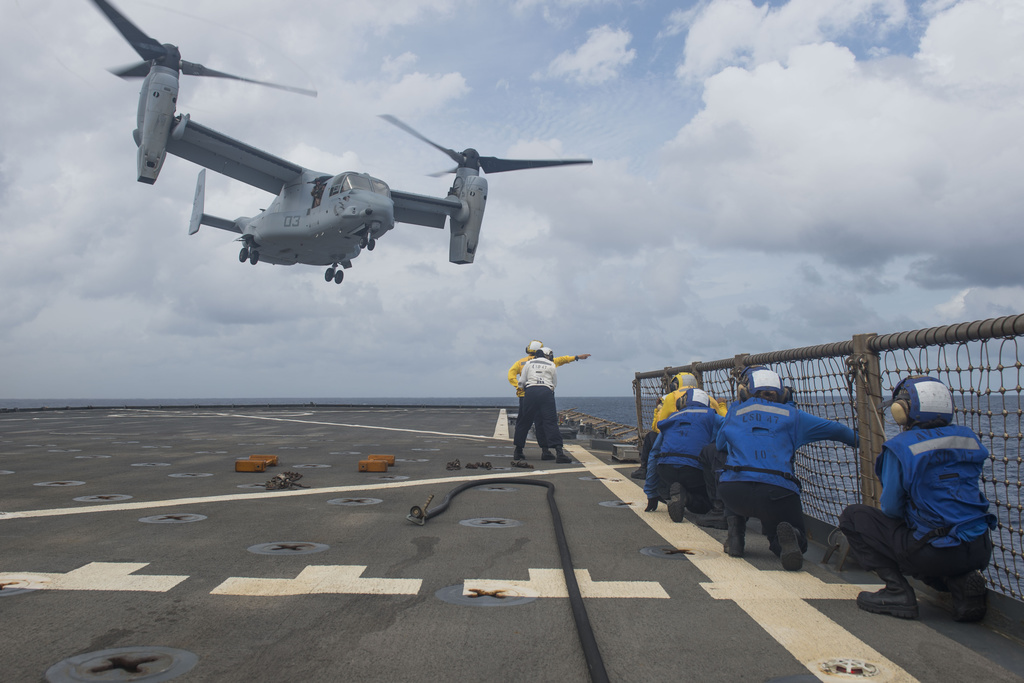 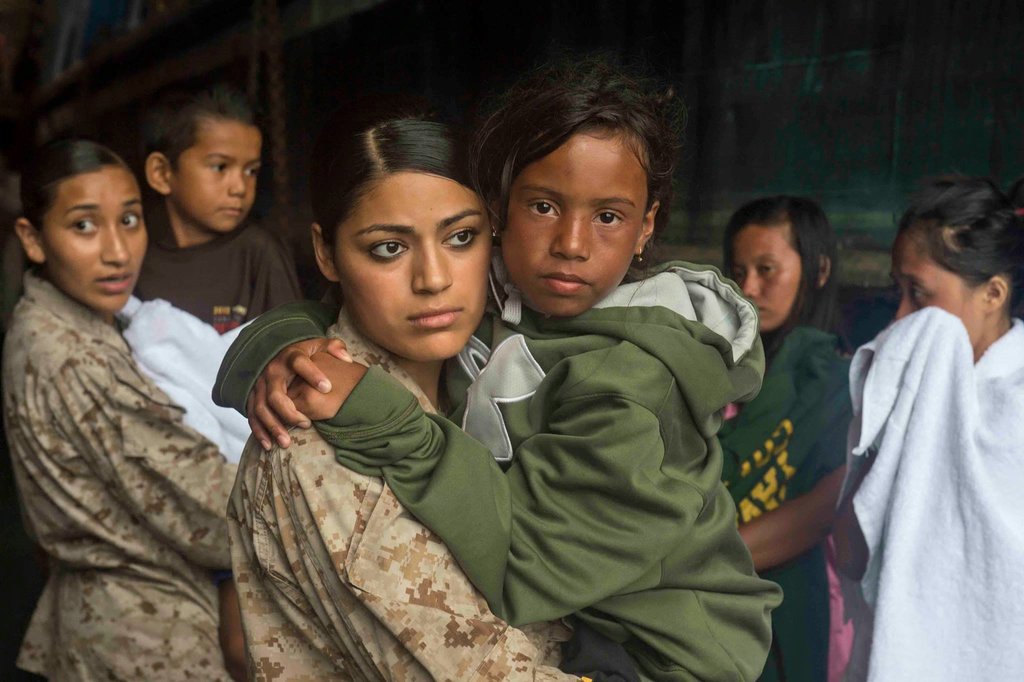 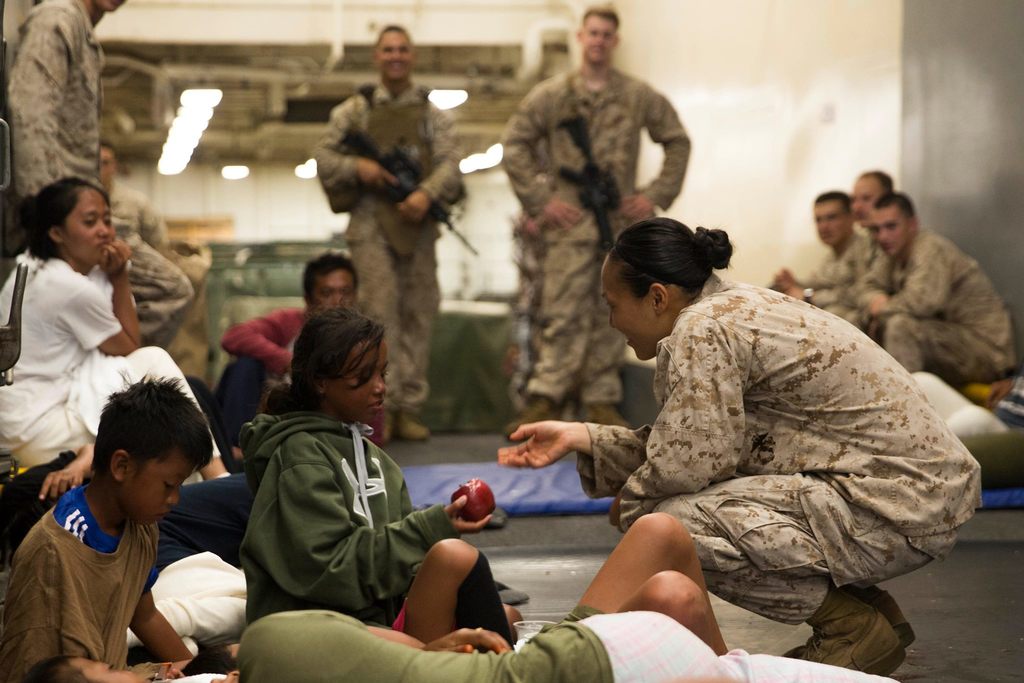 U.S. Marine Cpl. Jennifer Ko gives an apple to a distressed mariner aboard the USS Rushmore (LSD 47), after she was rescued from a sinking craft in the Makassar Strait, June 11, 2015. Ko is a supply warehouse clerk with Combat Logistics Battalion 15, 15th Marine Expeditionary Unit. Once on board, distressed mariners were provided food and medical attention by Marines and Sailors of the 15th MEU and Essex Amphibious Ready Group before being transferred to an Indonesian coast guard vessel. (U.S. Marine Corps photo by Sgt. Emmanuel Ramos/Released)