Visit, Board, Search, and Seizure

This is a group formed to show support for the Sailors and Marines serving on a VBSS team.

VISIT, BOARD, SEARCH, and SEIZURE

(VBSS) is the term for maritime boarding actions and tactics, designed to capture enemy vessels, to combat terrorism, piracy and smuggling, and to conduct customs, safety and other inspections, as employed by modern navies, marine and maritime services, military and police forces.

Regular sailors in the Navy are eligible to serve aboard VBSS teams depending on the ship's command structure. The majority of US Naval ships that deploy VBSS teams are smaller ships such as guided missile destroyers, guided missile frigates, etc. VBSS teams are used to combat illegal narcotics and arms trafficking and piracy.

USN VBSS teams are generally armed with Mk 18 or M4 carbines as well as Mossberg 500 shotguns and Beretta M9 pistols. The body armor is generally of the kevlar, law enforcement type with ballistic plate inserts and a buoyant tactical vest that doubles as a life preserver.

Note: The article above was copied from Wikipedia (April 2010)

You need to be a member of Visit, Board, Search, and Seizure to add comments! 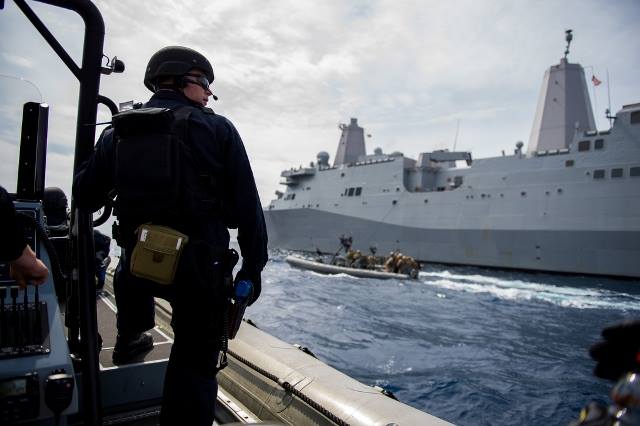 Hi Mike, I don't have direct answers to your questions, but I can share my knowledge based on my son's experience with VBSS training.  He attended school in San Diego, but it's been a few years, so things may have changed some since then.  As I recall, his training was 4-5 weeks long and they attended Monday through Friday for primarily full days.  Your son should be available to spend time with you in the evenings and on the weekends.

My son may be going to VBSS training in Hawaii.  Was hoping to get some info/clarification on what availability he will have to visit with us if we go out there to visit.  Does the course run 5 days a week?  Are the days potentially very long?  Is the likelihood high that his training will go into weekends?  I am retired Navy and know full well the potential for training courses to be very time intensive, was hoping for some real information along these lines......... 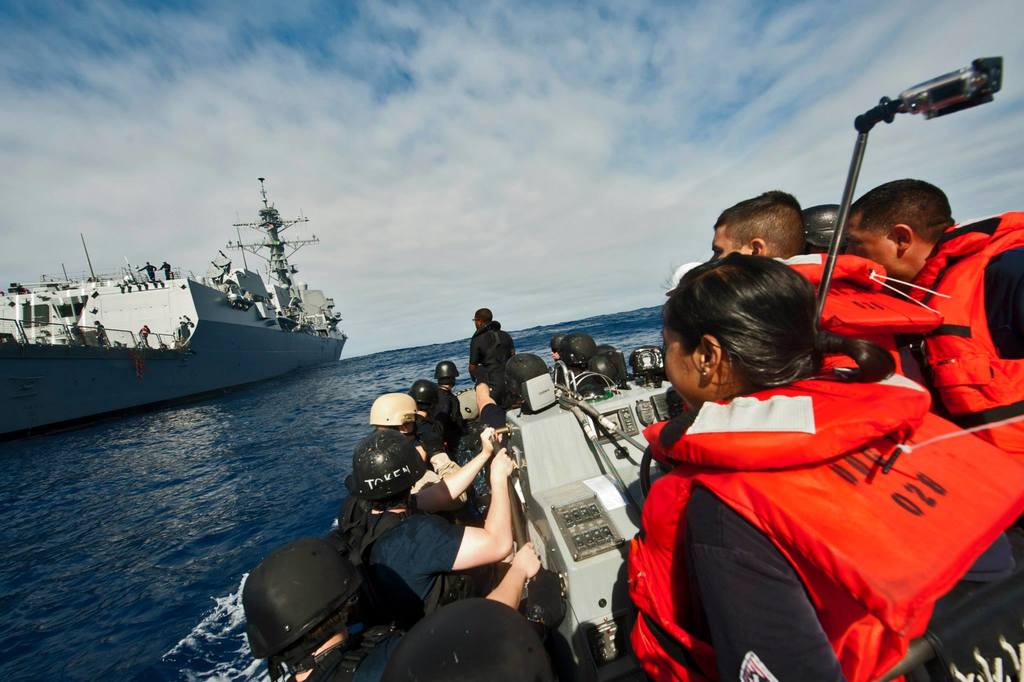 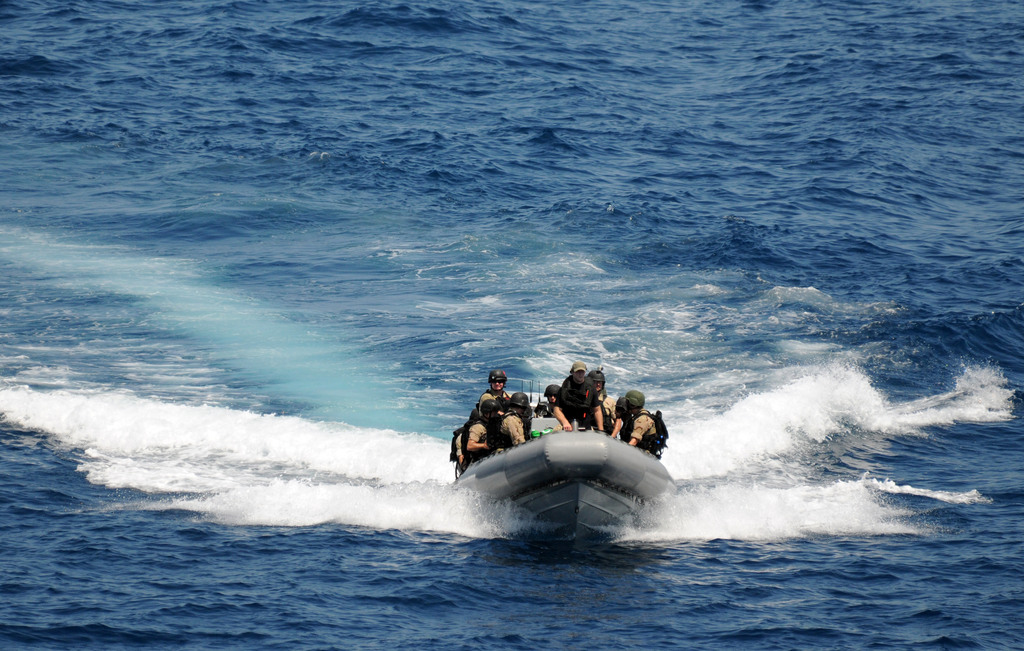 NCB-VBSS emerged after the initial Gulf War between 1990 and 1991 as a measure to support continued maritime interception operations imposed by United Nations (UN) resolutions.

NCB-VBSS training encompasses skills such as tactical team movements, self-defense tactics, boarding tactics, climbing and rappelling techniques, and more. In addition to Hawaii, this challenging high-risk training is also available at locations based in California, Florida and Virginia.

Initially, JMSDF Sailors received an introduction to NCB-VBSS where Ryan explained the mission and the scope of duties involved with maritime interception operations. During the introduction, the group witnessed a live demonstration of NCB-VBSS tactics given by a team of CENSECFOR instructors. Among the demonstrations was the ladder climb, tactical communications and verbiage, tactical team movements, room clearing procedures, and detainee handling procedures.

The tour proceeded to a lab where Sailors learn defensive tactics to control subjects and use close-quarters combat techniques taught by instructors Brenton and Brandon Wolff.

"The defensive tactics we teach are not intended to make Sailors martial arts experts, [but rather] they are intended to give them the confidence in their own ability to take control of a violent situation and neutralize a threat without resorting to deadly force," said Brandon Wolff while describing the training to the visiting Sailors.

Kohn described the flotation vests worn by VBSS members and the simunition weapons used in training. Simunition is a dyed detergent-filled round that simulates live fire ammunition designed to be fired through military training weapons. It allows students to the opportunity to conduct "force on force training" in a controlled, safe, and effective training environment.

"Familiarization with the gear we use is vitally important to our team members," said Bokan.
Following a brief facilities tour of the historic Hangar 54 on Ford Island, Rivera spoke to the visiting group emphasizing the importance of training and cooperation.

"This is the third consecutive year we have had the privilege of hosting our allies from Japan and we look forward to more opportunities in the future of providing this training," said Rivera.

Detachment Pearl Harbor is a component within the Center for Security Forces domain. The Center provides specialized training to more than 28,000 students each year and has 14 training locations across the U.S. and around the world.

The seizure is the largest made by Gary while operating in U.S, 4th Fleet area of operations and is worth an estimated street value of $81 Million.

"This was a great day for USS Gary. Everyone on board did their part in making this a successful interdiction. Each department helped in one way or another, from finding the suspect vessel to confiscating the contraband. The men and women of Gary will continue to work hard while we are assigned to Fourth Fleet and hopefully get a few more busts before we return to San Diego," said the ship's Executive Officer, Lt. Drew Greenlees.

Gary is homeported in San Diego, and is currently deployed to Central and South America in support of Operation Martillo and U.S. Fourth Fleet's mission, Southern Seas 2012.

"Overall coordination of counter-drug patrols and surveillance in the Eastern Pacific is done by the Joint Interagency Task Force, South (JIATF-S) a component of U.S. Southern Command (SOUTHCOM), headquartered in Key West, Fla. U.S. maritime law enforcement and the interdiction phase of operations in the region occur under the tactical control of the 11th Coast Guard District headquartered in Alameda, Calif. 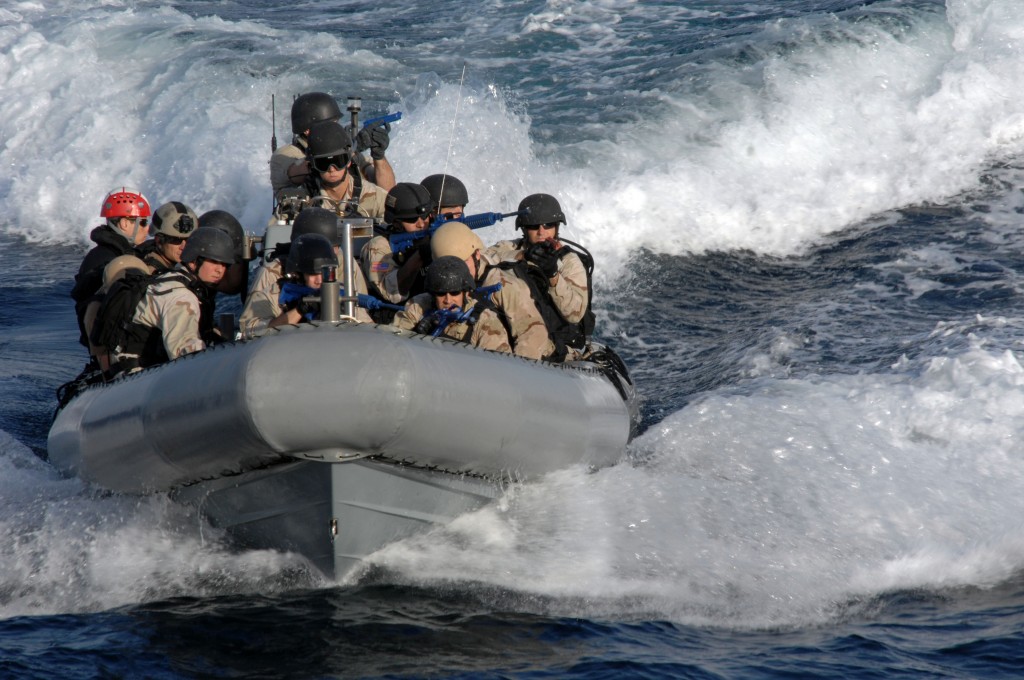