Navy Destroyers: Questions & Answers to what your Sailors life will be like while serving aboard a Destroyer in the United States Navy.

"Greyhounds of the Sea"

The destroyer evolved from the need of navies to counter a new ship which made a devastating debut in the Chilean Civil War of 1891 and in the Sino-Japanese War of 1894. This was the swift, small torpedo boat that could dash in close to the larger ships, loose their torpedoes and dash away. The world's navies recognized the need for a counter weapon and so the torpedo boat destroyer — later just "destroyer" — was born. From the first U.S. destroyer commissioned in 1902 to the famous ships of World War II to the Spruance-class to the Arleigh Burke-class, the U.S. Navy's destroyers have been evolving. And that evolution continues into the 21st century with the coming of the DD(X).

Technological advances have improved the capability of modern destroyers culminating in the Arleigh Burke (DDG 51) class replacing the older Charles F. Adams and Farragut-class guided missile destroyers. Named for the Navy's most famous destroyer squadron combat commander and three-time Chief of Naval Operations, the USS ARLEIGH BURKE was commissioned July 4, 1991, and was the most powerful surface combatant ever put to sea. Like the larger Ticonderoga-class cruisers, DDG 51's combat capability centers around the Aegis Weapon System (AWS). AWS is composed of the SPY-1D multi-function phased array radar, advanced AAW and ASW systems, VLS, and the Tomahawk Weapon System. These advances allow the Arleigh Burke-class to continue the revolution at sea.

Life while deployed on a DDG

Tour of A Navy Destroyer

You need to be a member of Navy Destroyers to add comments!

Paige it's awesome to hear that you've spent the Thanksgiving holiday with your son Billy and that beef jerky must be yummy!! :)

Gary, thank you for posting the article below about the Howard's deployment.  I wasn't there to see my son and his shipmates off, but I did have the opportunity to spend the Thanksgiving holiday weekend staying through Sunday with Billy.  We made a brief visit to the ship while I was there and stowed away a box full of homemade beef jerky that I had made and taken with me to SD.  Billy was given instruction by me that he couldn't open the box under after they got underway.  I wonder how far out the ship was before he and the crew got into it, lol...

Howard is a multi-mission ship designed to operate independently or with an associated strike group.  While deployed, Howard will conduct Theatre Security Cooperation and maritime presence operations with partner nations.

"Though the crew will miss friends and families, Howard is deploying at the peak of readiness," said Cmdr. David Zook, Howard's commanding officer.  "We look forward to serving the nation."

Howard is named in honor of Marine Corps 1st Sgt. Jimmie E. Howard, a combat veteran of both Korea and Vietnam who was awarded the Medal of Honor, Silver Star and three Purple Hearts during his 27 years of service.
U.S. Third Fleet leads naval forces in the Eastern Pacific from the West Coast of North America to the international date line and provides the realistic, relevant training necessary for an effective global Navy. 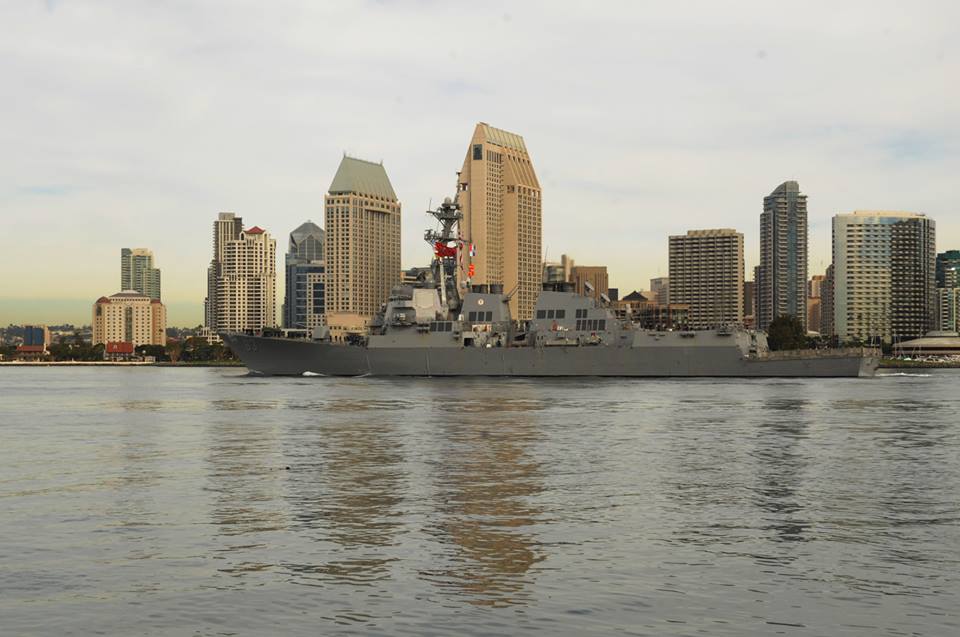 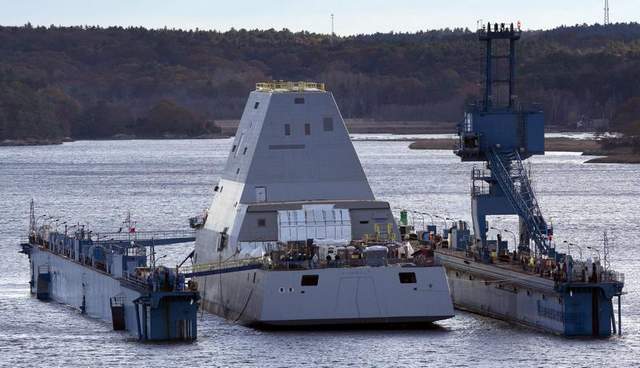 The first-in-class Zumwalt, the largest U.S. Navy destroyer ever built, floats off a submerged dry dock in the Kennebec River on Oct. 28 in Bath, Maine. Unlike warships with towering radar- and antenna-laden superstructures, the Zumwalt will ride low to the water to minimize its radar signature, making it stealthier than others. (Robert F. Bukaty / AP)

Toolan expressed that the three men for which the ships are named, were like anchors within their units and set a high standard for heroism within the services.

"These three men are examples of the service, sacrifice, dedication and the heroism it took to be that anchor from World War II to Vietnam to Iraq," said Toolan. "We're here today to name these destroyers in their honor. These destroyers will be able to conduct a variety of operations, from peace time presence and crisis management, to sea control and power projection."

Georgeann McRaven, sponsor of the USS Ralph Johnson, said she's looking forward to working with and supporting the ship and it's crew as it transforms from raw metal to a war-fighting vessel.

"I will become part of the ship. I'll be kind of like a den mother to the crew," said McRaven. "It will be wonderful when the ship has a crew and will be able to go out to see for the first time. I look forward to it."

Lt. John Finn was the first Medal of Honor recipient of World War II. He was honored for defending his ship from Japanese aircraft for over two hours during the attack on Pearl Harbor despite being shot twice and having numerous shrapnel wounds. He died at the age of 100 in 2010.

Pfc. Ralph Johnson was posthumously awarded the Medal of Honor in March 1968 after jumping on a hand grenade that was thrown into his fighting hole to save the life of a fellow Marine and to prevent the enemy from penetrating his patrol perimeter.

Sgt. Rafael Peralta was posthumously awarded the Navy Cross after taking critical gunshot wounds and later grabbing live grenade and covering it with his body to save his fellow Marines during a firefight in Fallujah, Iraq, Nov. 2004. 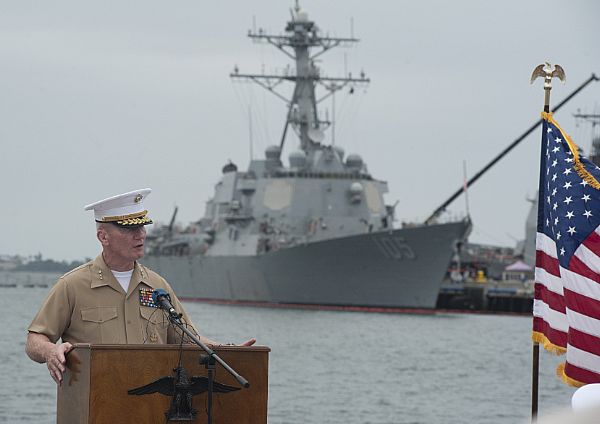 Just a note: If any of your Sailors are being affected by the Sequester, concerning Tuition Assistance, we got word today that Park University out of Missouri is offering free tuition ( I believe it may be in the form of a scholarship), as well as waiving registration fees for our men and women in uniform. Didn't know if it would be of any help for you all to know, but anything that helps should be passed on.

Comment by Mary, Proud Mom on February 3, 2013 at 6:19pm
Our sailor recently reported to ddG 110 and I have been happy with the communications so far. Do you know they ave a face book page for the ship? May I ask what rate Heather is?

Comment by Mary, Proud Mom on February 3, 2013 at 5:45pm
Hi all, lots of our destroyers are on the move. Hope you and your sailor are good.