About the Arctic Gator...

USS Anchorage (LPD-23), the seventh San Antonio-class amphibious transport dock, is the second ship of the United States Navy to be named for Anchorage, Alaska and the first U.S. Navy ship to be commissioned in Alaska.

The San Antonio-class is the first class of ship equipped with a state-of-the-art fiber-optic Shipboard Wide Area Network (SWAN). Its design provides computer and network access linking every manned space on the ship, to include troop/crew berthing. The SWAN’s design also allows for future growth over the life of the ship as technology advances. Over 760 SWAN drops (i.e. access points) will support computer workstations or other uses throughout the ship.

Anchorage's keel was laid down on September 24, 2007 at the Avondale Shipyard in New Orleans, Louisiana, then owned by Northrop Grumman Ship Systems. The ship was launched on February 12, 2011. She was christened two months later, May 14 - the first ship christened by Huntington Ingalls Industries since Northrop Grumman spun off its shipbuilding divisions as a separate company. The ship's sponsor is Annette Conway, wife of former Marine Corps Commandant General James T. Conway. The ship was formally delivered and accepted by the US Navy on September 17, 2012.

On November 21, 2012 the Pre-Commissioning Unit Anchorage (LPD 23) moored pierside for the first time at her homeport in San Diego during a homecoming ceremony.

The Anchorage was commissioned on May 4, 2013 in her namesake city ...

- Group Guidelines for browsing and posting -

By reading this, you hereby agree and abide by all OPSEC rules herein. In addition, please do not share any information and/or photos that appear on the Command's "Private" FRG social media pages or any other Anchorage online group postings that cannot and should not, be shared in public...

This is for the safety of the crew and always remember, loose lips sink ships. 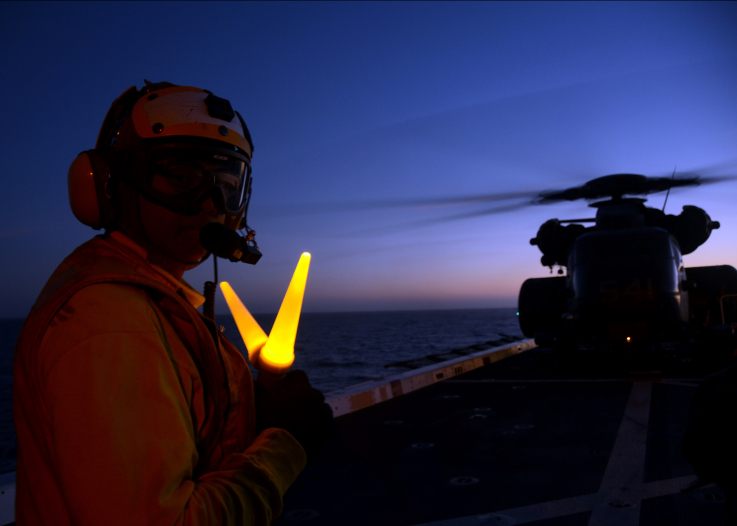 Aviation Boatswain’s Mate (Handling) 2nd Class Oliverjay Espina directs a Helicopter Mine Countermeasures Squadron 14 aircraft aboard amphibious transport dock USS Anchorage (LPD 23) off the coast of San Diego during Rim of the Pacific (RIMPAC) Exercise 2014. Twenty-two nations, 49 ships, six submarines, more than 200 aircraft and 25,000 personnel are participating in RIMPAC from June 26 to Aug. 1 in and around the Hawaiian Islands and Southern California. The world's largest international maritime exercise, RIMPAC provides a unique training opportunity that helps participants foster and sustain the cooperative relationships that are critical to ensuring the safety of sea lanes and security on the world's oceans. RIMPAC 2014 is the 24th exercise in the series that began in 1971.
(U.S. Navy Photo by Chief Mass Communication Specialist Elena Pence/Released) 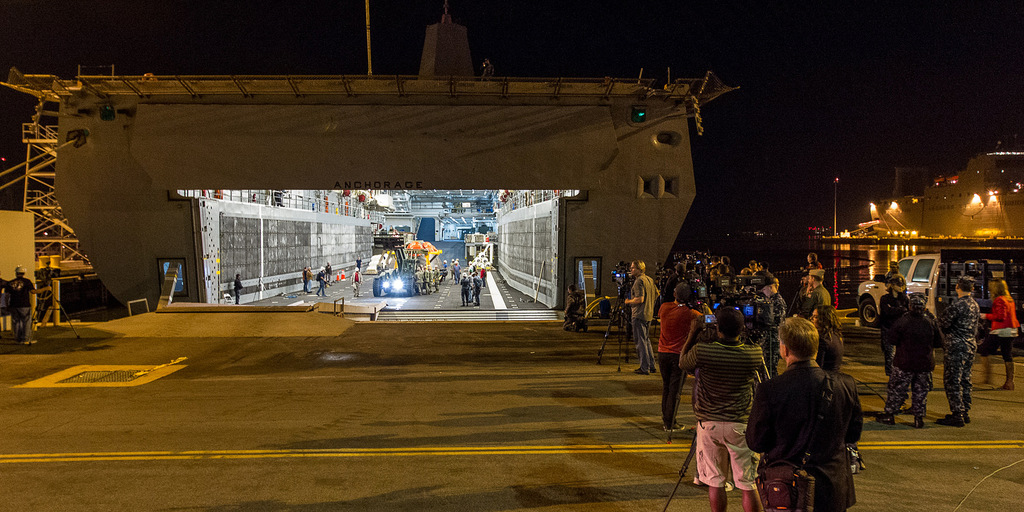 You need to be a member of USS Anchorage (LPD 23) to add comments! 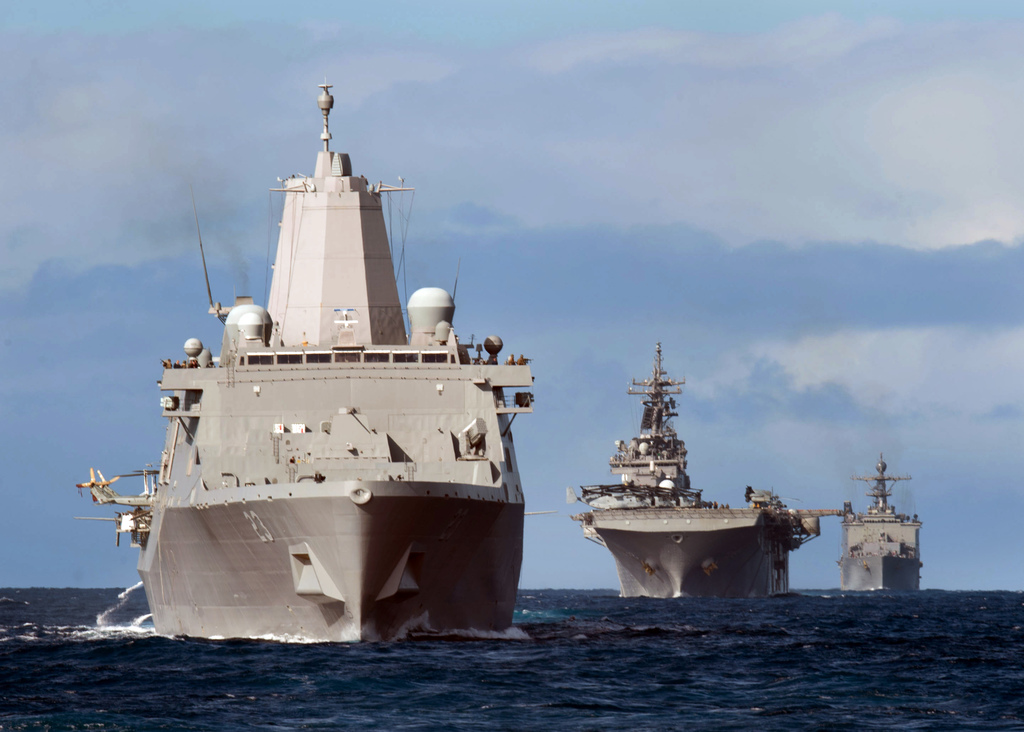 The littoral combat ship USS Freedom (LCS 1) transits alongside USS Anchorage (LPD 23) off the coast of Southern California on Feb. 19, 2017. US Navy photo.

Now that we are finished selling Cruise Books to the ship’s crew, we’d like to extend this opportunity to family and friends as well! If you’re not sure of what a cruise book is, here is a brief description:

The cruise book is a Naval tradition that dates back to the late 1800s, when crews began documenting events of their cruises/deployments. The book follows a ‘yearbook’ format with official photos of EACH Sailor in their respective departments. Cruise books also capture many memorable moments from a ship’s deployment including port visits, volunteering opportunities, Change of Command, Chief pinning ceremony, Crossing the Line ceremony, and many other various evolutions around the ship.

This cruise book is especially great since it documents ANCHORAGE’S Maiden Voyage! The book is hard cover with 96 pages full of memories from our 2015 WESTPAC deployment.

We are currently selling Cruise Books at $15 each, plus shipping & handling. ALL payments will go towards ANCHORAGE’s MWR program to support morale boosting activities for ANCHORAGE Sailors!

Please contact LTJG Lindsay Lewis for any questions or if you’d like to place an order! lindsayannlewis@gmail.com 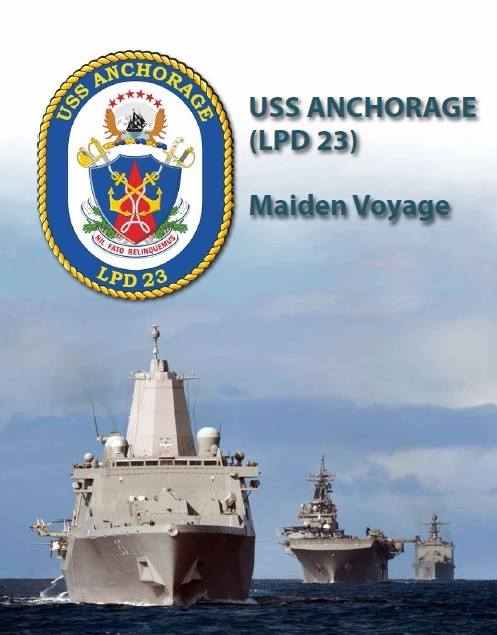 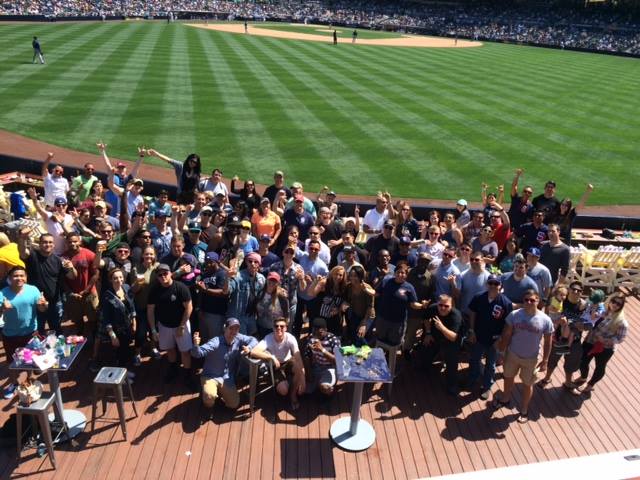 On May 4th, for Anchorage's 3rd birthday, the command celebrated by spending a day at the ballgame for the San Diego Padres vs. Colorado Rockies game at Petco Park in downtown San Diego... 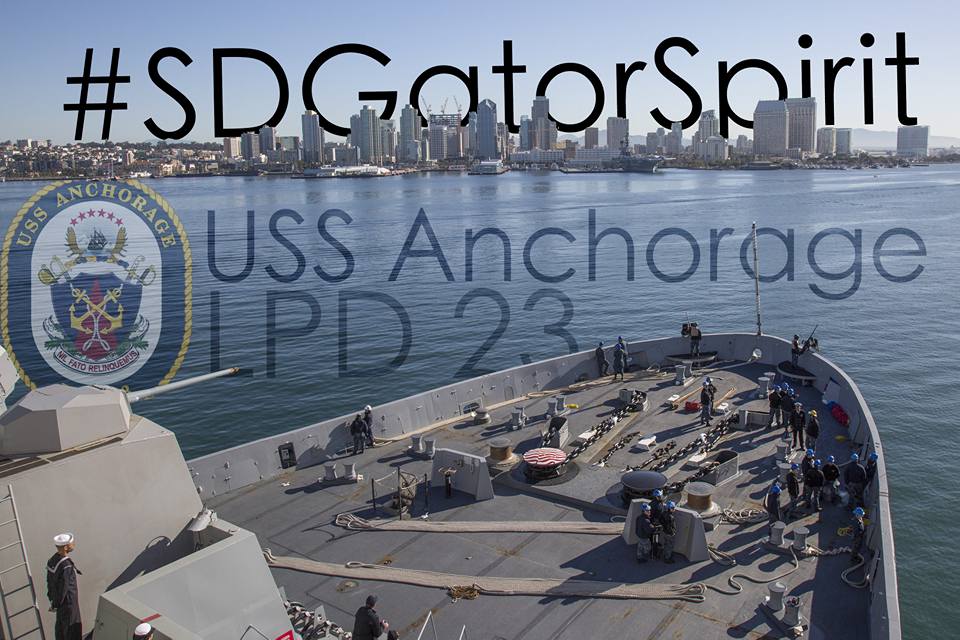 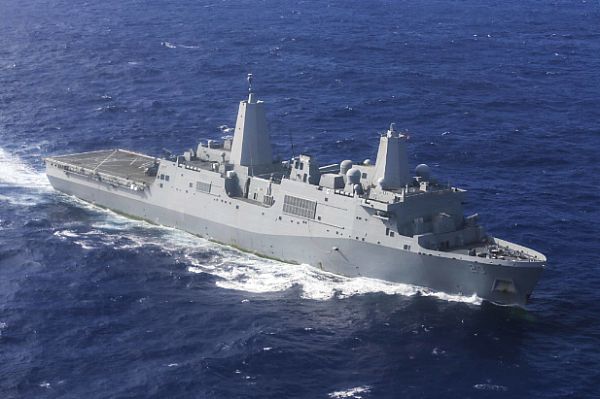 This is the second consecutive win for Anchorage, which completed its maiden deployment in December 2015.

"The Battle 'E' clearly recognizes the hard work of Anchorage Sailors and the sacrifices made by Anchorage families over the past year," said Capt. J.J. Cummings, commanding officer of Anchorage.

The Battle "E" award is a tribute to the ship's overall readiness and was determined by a yearlong evaluation of Anchorage's accomplishments during training exercises and various command inspections.

"We are also honored to be the only LPD to win the Battle 'E' this year," said Cummings. "We will hang our second consecutive Battle 'E' on our bridge wing on behalf of the Anchorage families who supported us in 2015."

After work ups from January through March of 2015, Anchorage departed in April for a seven-month maiden deployment.

Cummings added, "the Anchorage team worked extremely hard to prepare for deployment and then performed exceptionally well in the 5th and 7th Fleet areas of operation."

Personnel aboard Anchorage are now authorized to wear the Navy "E" ribbon and Battle "E" device.

"Adding that ribbon to my rack is really special, [especially because] this is my first ship," said Personnel Specialist 3rd Class Ryan Bannon. "It was a challenging deployment, and I am glad that we are getting rewarded for [all our hard work]."

Anchorage is part of the Essex Amphibious Ready Group, and is in port San Diego undergoing a continuous maintenance availability (CMAV) to receive upgrades and repairs. 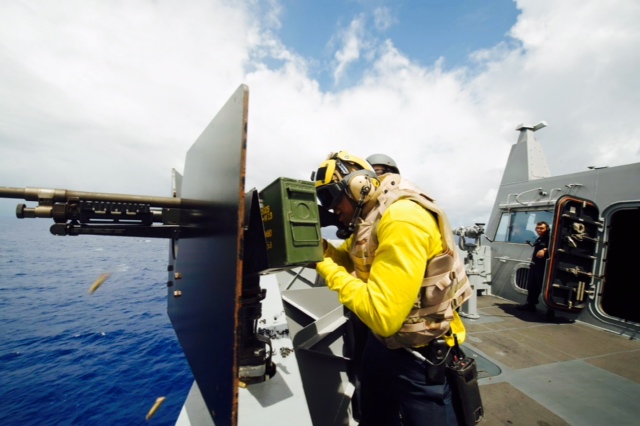 Oliver (on the right) manning the rails NBSD Homecoming 2015 HOOYAH! 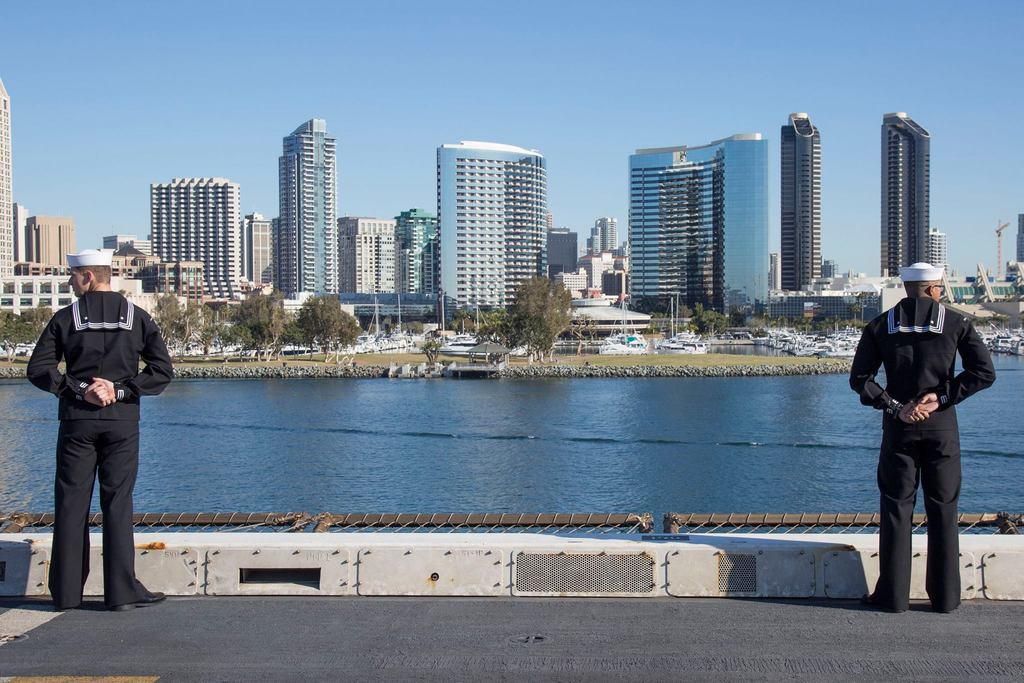