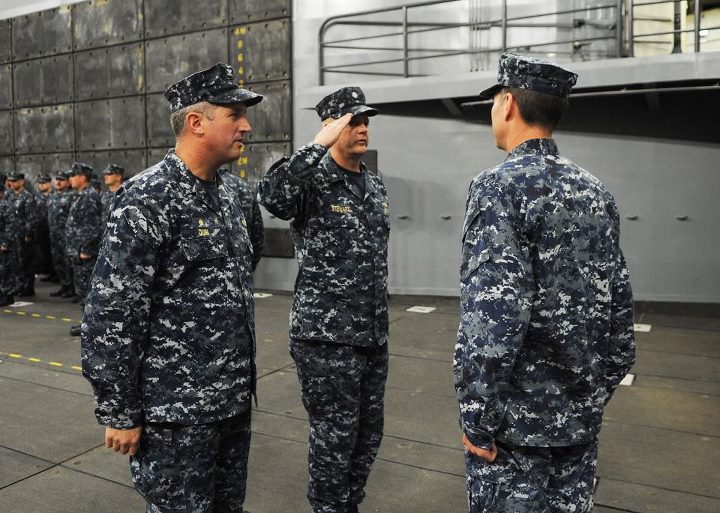 Cmdr.Joel Stewart relieved Capt. Brian Quin, who served as Anchorage’s first commanding officer overseeing the ship’s construction and delivery to the U.S.Navy. Stewart served as the command’s executive officer and has the distinction of being Anchorage’s first crew member.

The change in leadership was accelerated one month earlier than originally planned and ahead of the ship’s commissioning ceremony May 4 amid health concerns for Quin.

“As the commanding officer, the safety of the crew has and always will be the number one priority for all ship operations,” he explained. “But there are people looking out for me as well, and I took to heart their counsel. I trust in the opinion of dedicated medical professionals who advised I address my health concerns immediately. I strove to set the conditions for success and I am sure Cmdr. Stewart will execute with precision and style.”

“Anchorage’s crew has impressed me beyond any measurable means,” said Quin. “The drive,dedication, attention to detail and, above all else, professionalism, of my shipmates will lead this ship to the fleet with a myriad of achievements that sets a high bar. As I have repeatedly told them in every captain’s call, I can only thank them for the privilege of being their captain.”

“It’s been a great experience working and training under Capt. Quin, he is an incredible mentor,” said Stewart, who noted that Anchorage will be his first at-sea command in which he is the commanding officer. “I’m always impressed in seeing what this crew is capable of and their hard work will make taking on this new challenge a bit easier. For that, and to Captain Quin, I am grateful for this opportunity.”

Anchorage is the seventh San Antonio-class amphibious transport dock. She was built at the Huntington Ingalls Industries Shipbuilding site in Avondale,La. The ship will be commissioned in May in her namesake city of Anchorage,Alaska and is the second ship to be named for the city.