I think we were all anxious to get the adventure going…I know I was as I didn’t really sleep much at all. I even spent a little time on the computer at the internet café seeing what was new on NavyDads.com at 05:00. Fred, Tom and I met up, checked out and proceeded to catch the shuttle from the hotel to the USO at the airport. Tom was still not feeling well and came very close to going to the airport and flying home- he toughed it out though and was a real trooper even though he was feeling pretty poorly. We discovered that many had the same idea as us and walking around the corner saw that there was quite a line already. Richard and Chuck beat us there and were quite a-ways up the line…when offered to join them we naturally could not refuse and got to know some of the other folks around us. It is always kind of surprising that regardless of the geographical diversity of the folks there that all share such a common and deep pride in the job that their sons and daughters are doing on the carrier. Naturally there was talk of NavyDads.com with the NavyDads.com shirts that Richard and myself were wearing we once again become salesmen for the site and for what we stood for. 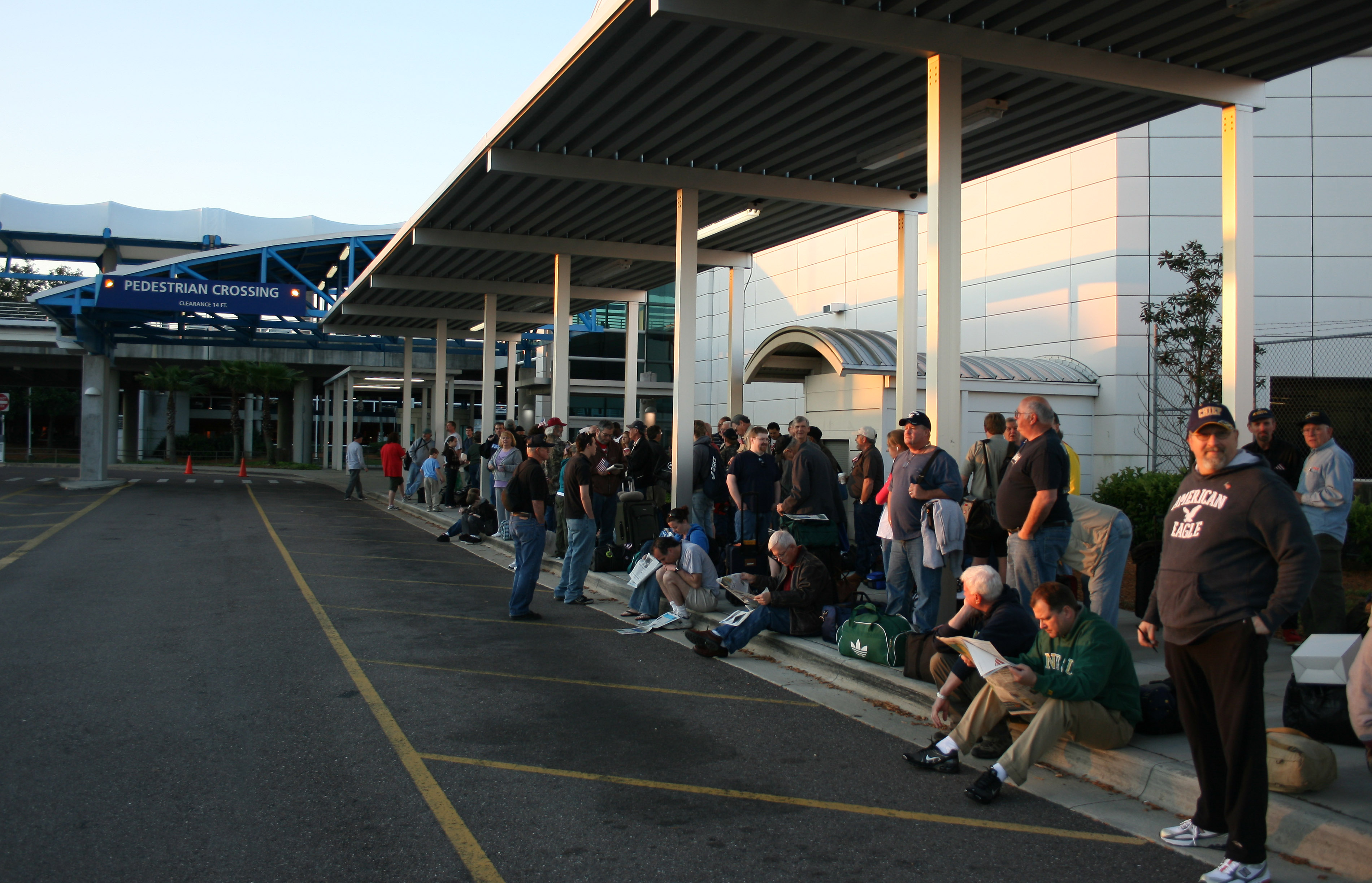 Around 08:00 the first bus showed up and we managed to shoehorn our way in. I say shoehorn as were riding contact school buses and while fine for the junior high crowd, we were pretty cramped. All were holding their bags on their laps and cameras and what not…..funny how no one really complained though but we did a lot of joking. We had to wait about 15 minutes for base security to show up….finally seeing sailors in whites boarding the bus made everyone happy as we knew that the journey was real and about to get underway. It is about a 35 minute ride from the Jacksonville airport to Mayport NAS….a good chance to see some scenery. In addition we got to cross the cable-stay bridge that has been featured on TV…..it is pretty impressive and it was my first time seeing a cable-stay suspension bridge. There was some confusion at the base when the bus showed up…but all was sorted out and soon we were on the pier and we all managed to bail out of the bus and into the morning sun. It was a glorious morning….bright sun and pretty warm considering the time of year. The Navy had some refreshment set-up…about 70 boxes of doughnuts and tons of bottled water available for the Tigers. Was nice to see the water…being outside tends to dehydrate everyone and we had quite a while to wait for the ship to show up. 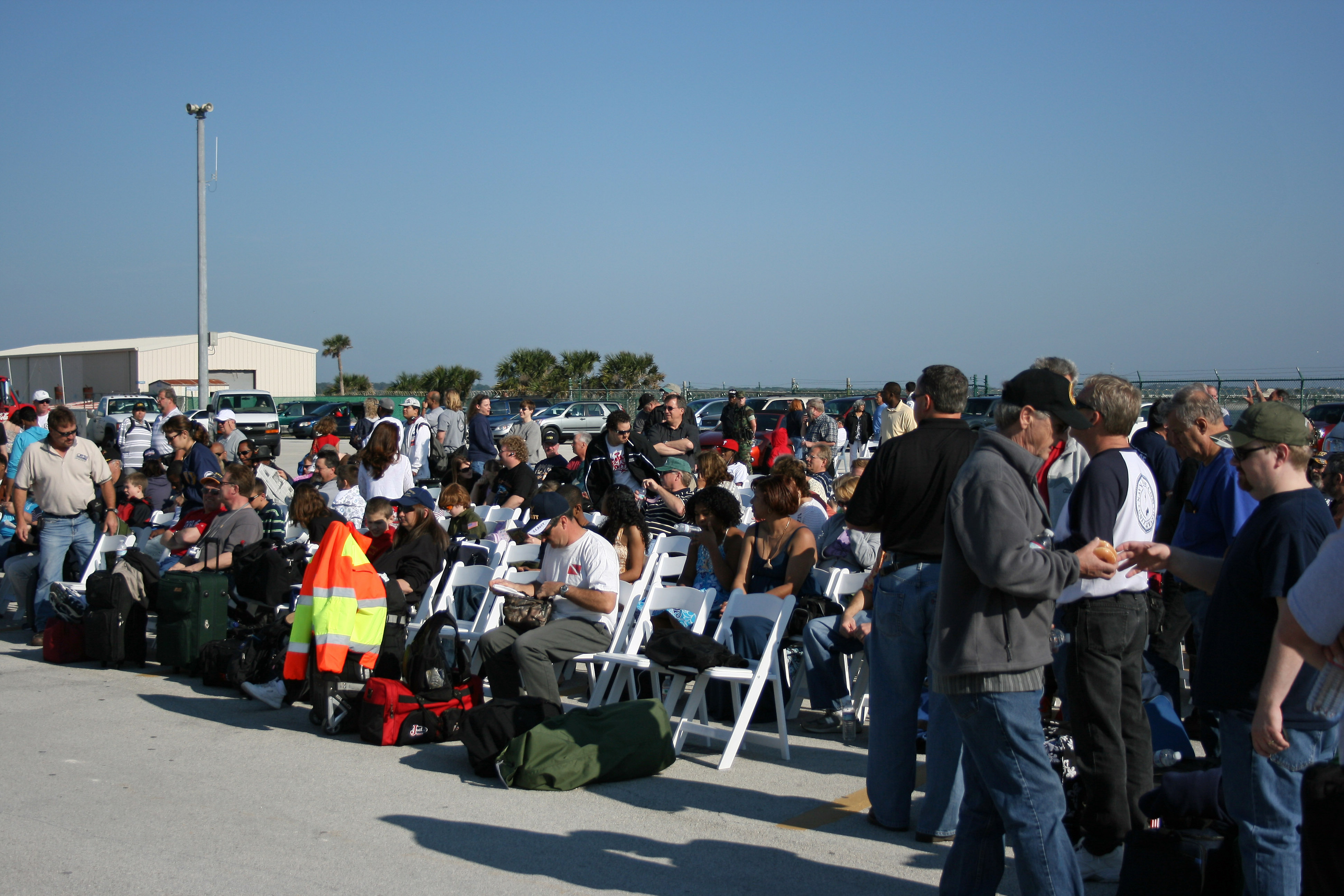 There were quite a few chairs set up for the Tigers, but it was pleasant to stand and be able to walk around a little and explore a little. About a hour later talk turned to the Roosevelt being visible in the distance….walking over to the ocean side of the pier it was coming into view….slowly…in the distance. A number of us walked down the breakwater and climbed over the rocks to get a better view….the silhouette of a carrier is unmistakable and the excitement level was building….not only were there 1292 Tigers waiting there, but a large number of families were on hand to see their loved one come back to United States soil. I’m not sure how many crew were disembarking at Mayport, but there were an awful lot of wives and children with big smiles on their faces as the ship slowly made it’s way into the harbor. 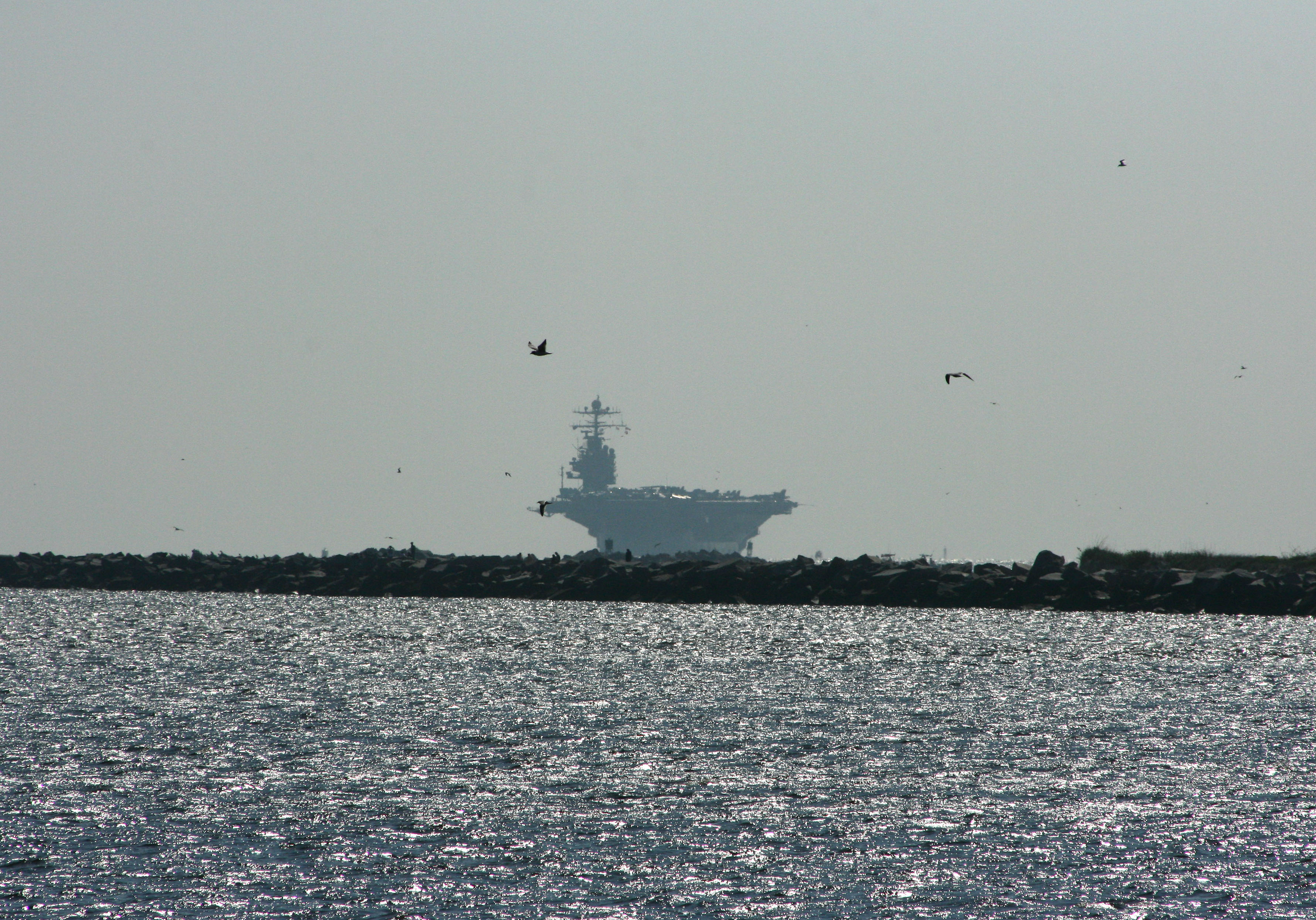 The day was still great….sunny and warm, but there was a hint of wind building and some broken clouds started to show up. Still, sunscreen was the call of the day and despite being pretty well painted with the stuff, I know I got pretty sunburned on the face and forehead…..a small price to pay for what was about to unfold.

Cheers went up as the ship drew abreast and all were trying to find their sailor on the ship….no easy task with a vessel almost 1100 feet long carrying 5000 sailors. Cell phone use was huge with everyone trying to hook up with their sailor….you could hear things like…”yeah, we’re standing in the line by the red car parked in the lot just to the north of the semi-trucks”……got to be like a big game of hide-n-seek!

Mooring something the size of the Roosevelt takes quite a bit of time as the tugs very slowly inch the ship towards the pier. Soon you could hear the shots of the rifles sending out lines from the ship to the dock….soon the windlasses were pulling the ship towards the dock, but it sure seemed like it took forever. Around 11:00-11:30 (I’m guessing here as time kinds gets confused with all the excitement) the cranes started to place the brows between the pier and the elevators on the starboard side. All the elevators had all been lowered simultaneously and that was quite a sight to see—I am still awed by the size of the ship and the associated equipment like the elevators. It was chaos with all trying to get to the front of line to check in to board….we were in line and lots of people were frustrated when they tried to cut in and security personnel told them to get in line.

Soon enough though the sailors that were disembarking from the aft brow were headed to the dock and there was much kissing and hugging going on as families were reunited after all those long months apart. We’ve all seen much on TV and movies about homecomings, and seeing in real-time sure reinforces the time apart. In a later post I’ll talk about seeing this from the ship perspective as we were allowed on deck to experience the ship coming into Norfolk from the ship side view. 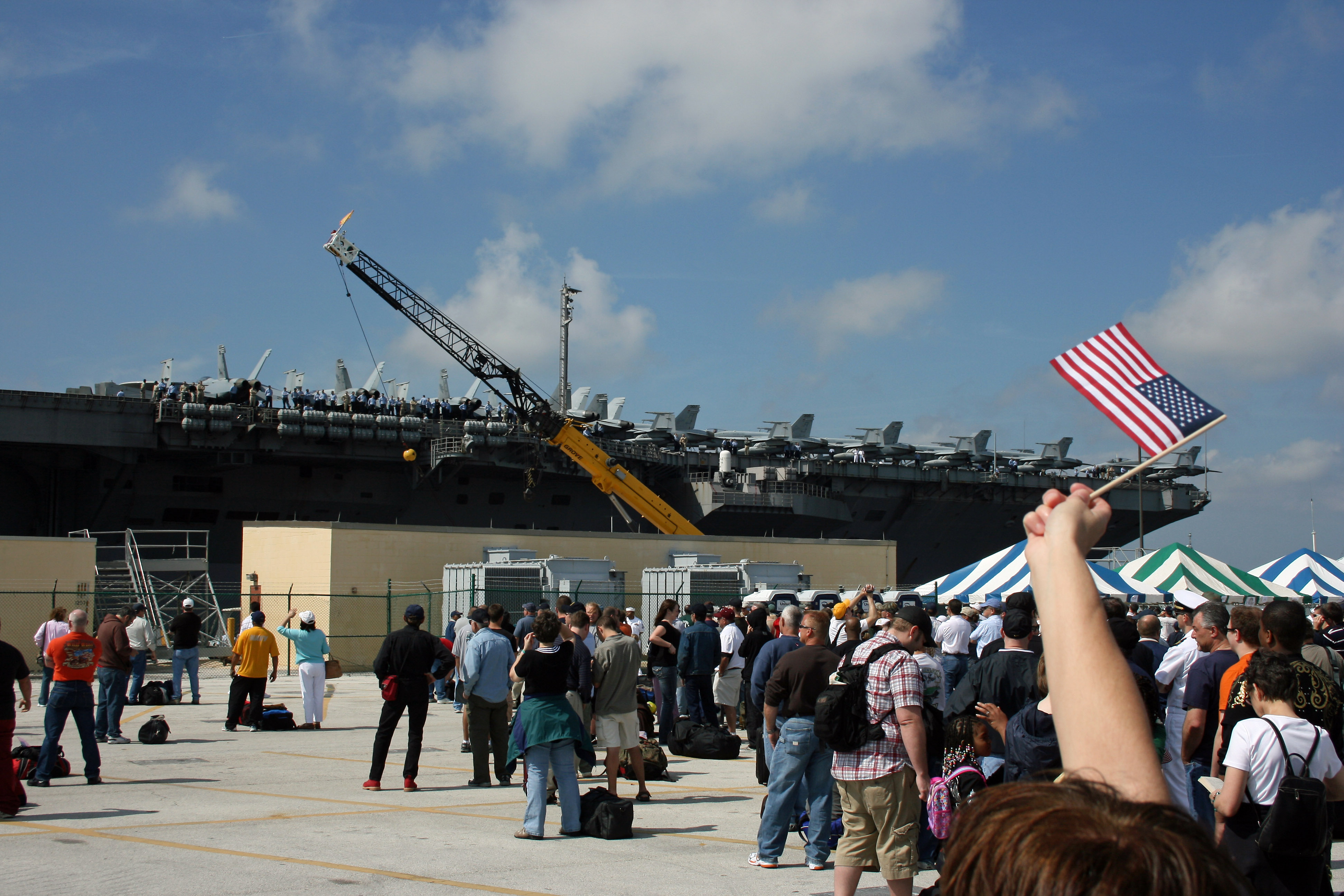 It wasn’t long before we saw sailors heading down the forward brow. They were meeting up with their Tigers and escorting them aboard their home for the next couple of days. David found Richard and Kira and Fred had a tearful reunion. Soon I felt a hand on my shoulder and a voice that said “give me all your money and wallet”….my first thought was that it didn’t sound like Rich, Fred, Tom or Chuck….I turned around and Eric was there with a big grin greeting me.

Tears of joy. I cant even imagine....Cant wait