I sat here and just re-read all my posts about my Tiger Cruise experience and realized I still had not completed the promised follow-up.  It is not that I haven't tried....at least a dozen times I've sat down to write this, but words eluded me.  I'm not sure why.  But I'm gonna try again- so please bear with me!!

Much has happened over the past few years and much has changed.  Kat is no longer in the Navy- her enlistment was up in '10 and she lives outside Seattle in…

I ran across a very interesting website that I thought I would share....it is a virtual Vietnam Veterans memorial wall.....one of the pages lists those that gave their lives by state....click a state name and you can eventually get to a list of medals and often a bio. This was a monumental amount of work and it is a reminder that many gave their lives in a far away land with a funny name.......

I wanted to take a minute to thank Paige for opening her home up to a number of Navy parents yesterday in Prescott Valley. It was a great chance to meet others with kids in the Navy and to compare stories...and to brag a little too!! I know Paige will post some photos as well but here are a couple..... 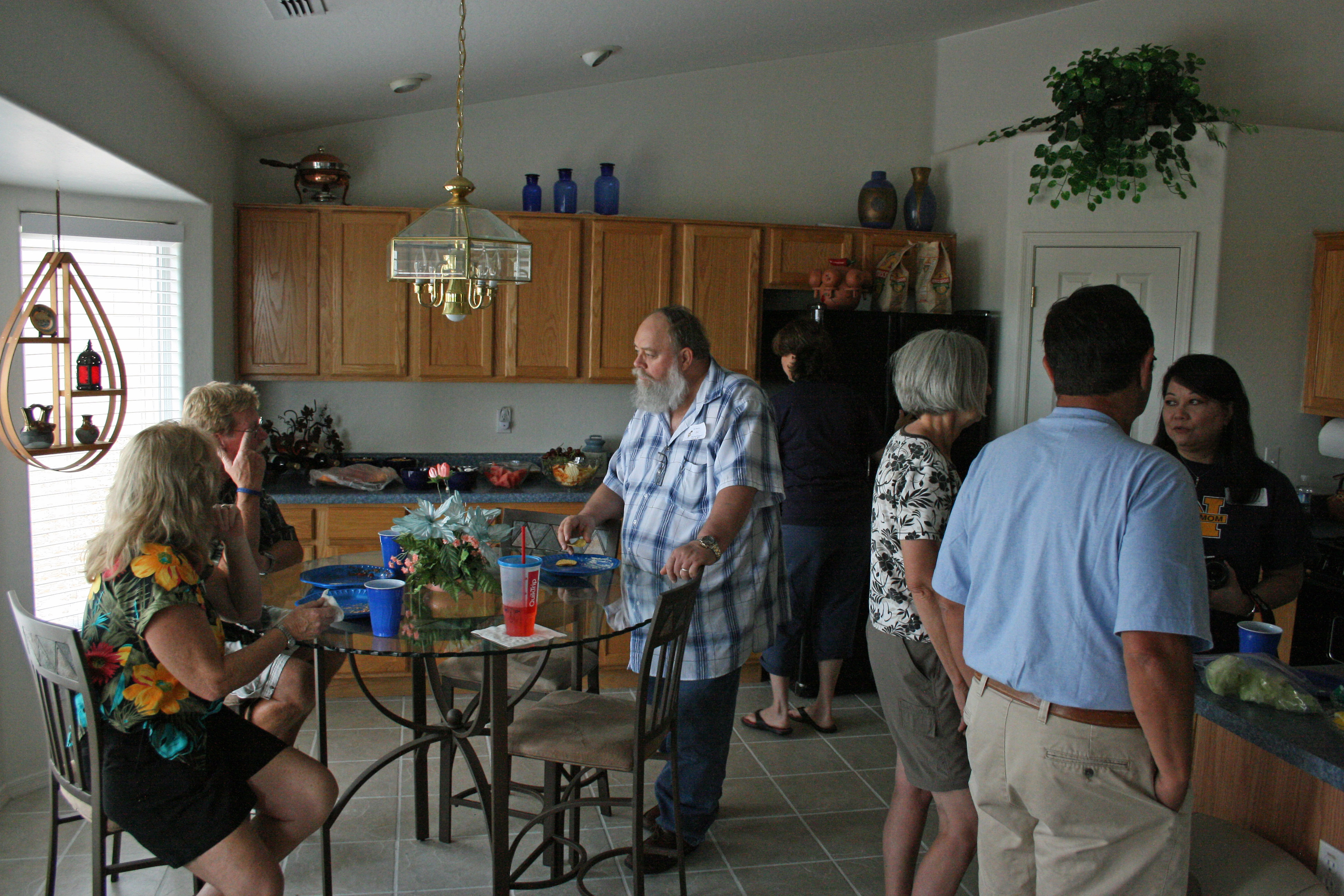 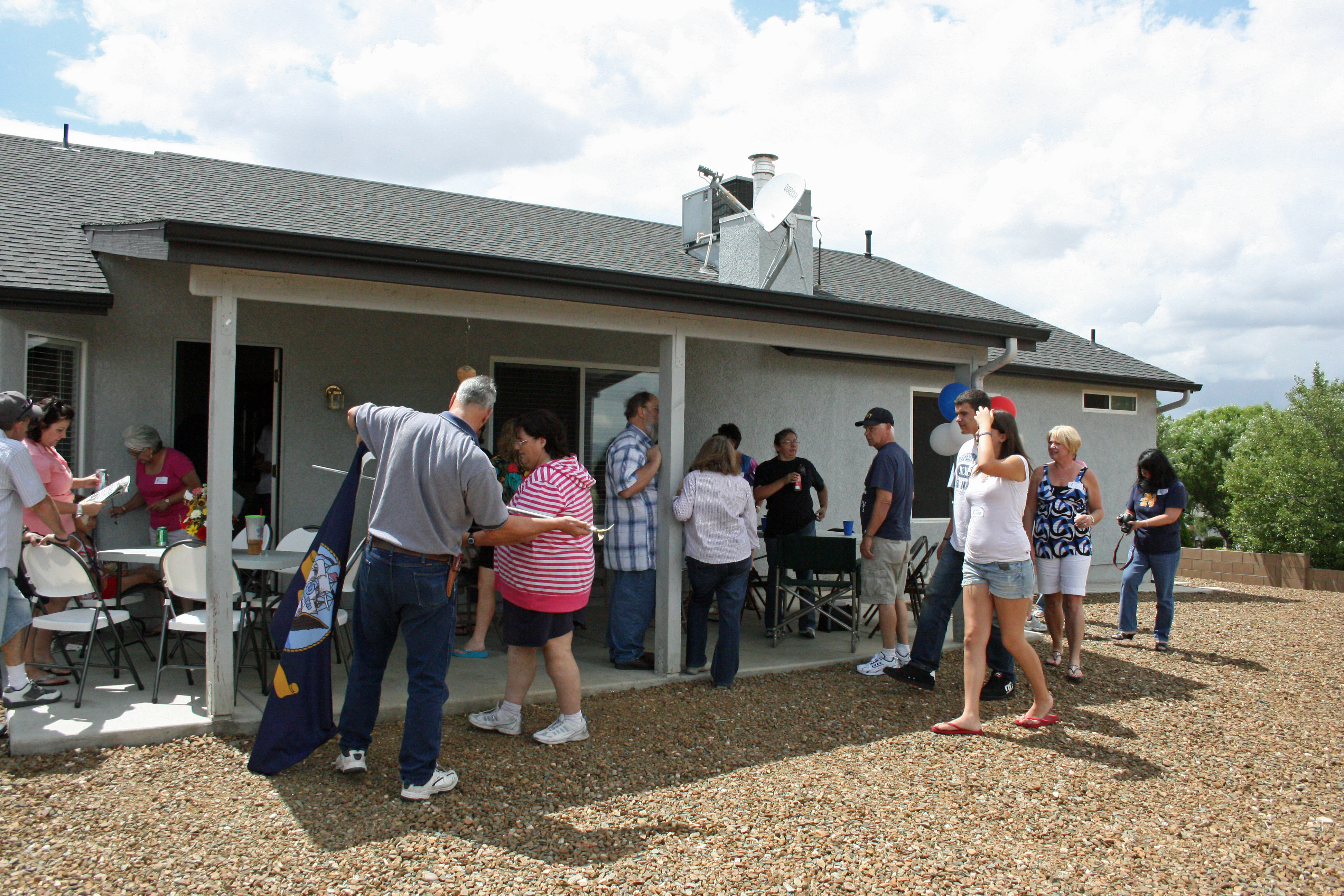 Thanks to Paige and to neighbor Brenda for all the work and hospitality! It was fun… Continue

Wow….homecoming….after seven-plus months at sea everyone was returning to US soil and their families. I knew it was going to be a memorable day with lots of mixed emotions for all.

Eric and I had agreed to make it another 06:00 day, but around 05:00 I managed to wiggle out of the rack and get cleaned up. I wasn’t sleeping anyway, so why stare at the inside of my eyelids when I could go ahead and get cleaned up and get ready for the day. The ship’s movement had eased over night and…

Saw an interview with Gary Sinise this AM and he was talking about a movie out today...if you look at the website: http://www.brothersatwarmovie.com you can watch a clip and read about the project....it looks powerful and something that all Americans should see. I know this is off-topic here but the fight for freedowm is larger than…

Wow! Pretty impressive air power demo….sure makes you appreciate what the pilots and support crew go through. I was still kind of in a daze as I don’t think it still hit me that it was real. I’ve been a fan of military aircraft my whole life and swear I was a fighter jock in another life, so I was living the dream of being that close to the planes as they launched.

Anyway, as I said in part 2, the Air Boss asked all to leave the flight deck so he could recover the aircraft and…

I know I musta had a grin from ear to ear after that shot as you try to absorb the experience and burn it into memory. The launch must be pretty violent as you sure can see the pilots head get jostled around in the cockpit as the plane accelerates. You can see the afterburners as the 18 moves down the flight deck….as soon as he clears the end of the deck the pilot goes into a clearing turn to port and the burners kick off. You also note the thin trails from each wing tip…at the wingtips…

As I said in Day 1, Part2, sleep didn’t come easily for me….think more so the unfamiliar place and excitement than anything else. I’m also used to a very quiet environment- not at all like an active aircraft carrier. I really cannot imagine the noise level if they are conducting ops at night, though both Eric and Kat have told me that they are so used to the sound of the catapults and arresting gear that they have trouble sleeping in the quiet. The racks are pretty comfortable once you get…

For those that have been following the Tiger Cruise posts- fear not. I'm about half way through the first part of Day 2. Having Eric here visitng has been great, but like many good things in life that have to come to an end, he headed back to Norfolk this AM, I headed back to work and now am trying to re-establish a routine. I'll be working on the post over the next day or two and am Photoshop'ing a bunch of pics to post as well.

After the handshake and hugging it was time for introductions to all……it was a great way to see our sailors as you realize that they still seemed like kids when they left but now seem like grown adults. All naturally were in uniform and looking pretty darn sharp….but then after not seeing the boy for a year…..’nough said.

It was time to make our way to the check-in gates. Our sailors had come out to escort us through the gate and onto the ship. It was nice to be able to finally…

I think we were all anxious to get the adventure going…I know I was as I didn’t really sleep much at all. I even spent a little time on the computer at the internet café seeing what was new on NavyDads.com at 05:00. Fred, Tom and I met up, checked out and proceeded to catch the shuttle from the hotel to the USO at the airport. Tom was still not feeling well and came very close to going to the airport and flying home- he toughed it out though and was a real trooper even though he was feeling…

Tiger Cruise has come and gone and I guess I have returned to earth and will start some blogs about the entire experience. To sum it up…AWESOME. We’ve all seen much on TV and the movies about carrier ops and many of us have poured over the PBS DVD set “CARRIER”, but until you have experienced a cruise on one you have no real concept. I’ll try to start and the beginning and try to give an idea of what my 2 & ½ day cruise was like.

Packing is an experience…you are advised that…

Waiting here for the breakfast buffet to open and get to the USO to sign in and get going! Met with Richard at the Atlanta airport yesterday and then met up with Fred and his father-in-law Tom at the hotel over some beverage. The shirts have attracted some attention and think we have some more potential members- haven't even been to the base yet! Great Weather-- in the 70's when we landed yesterday and there are bunch of dads as giddy as kids on Christmas eve......will try to spend some more…

We Lost a Hero Today 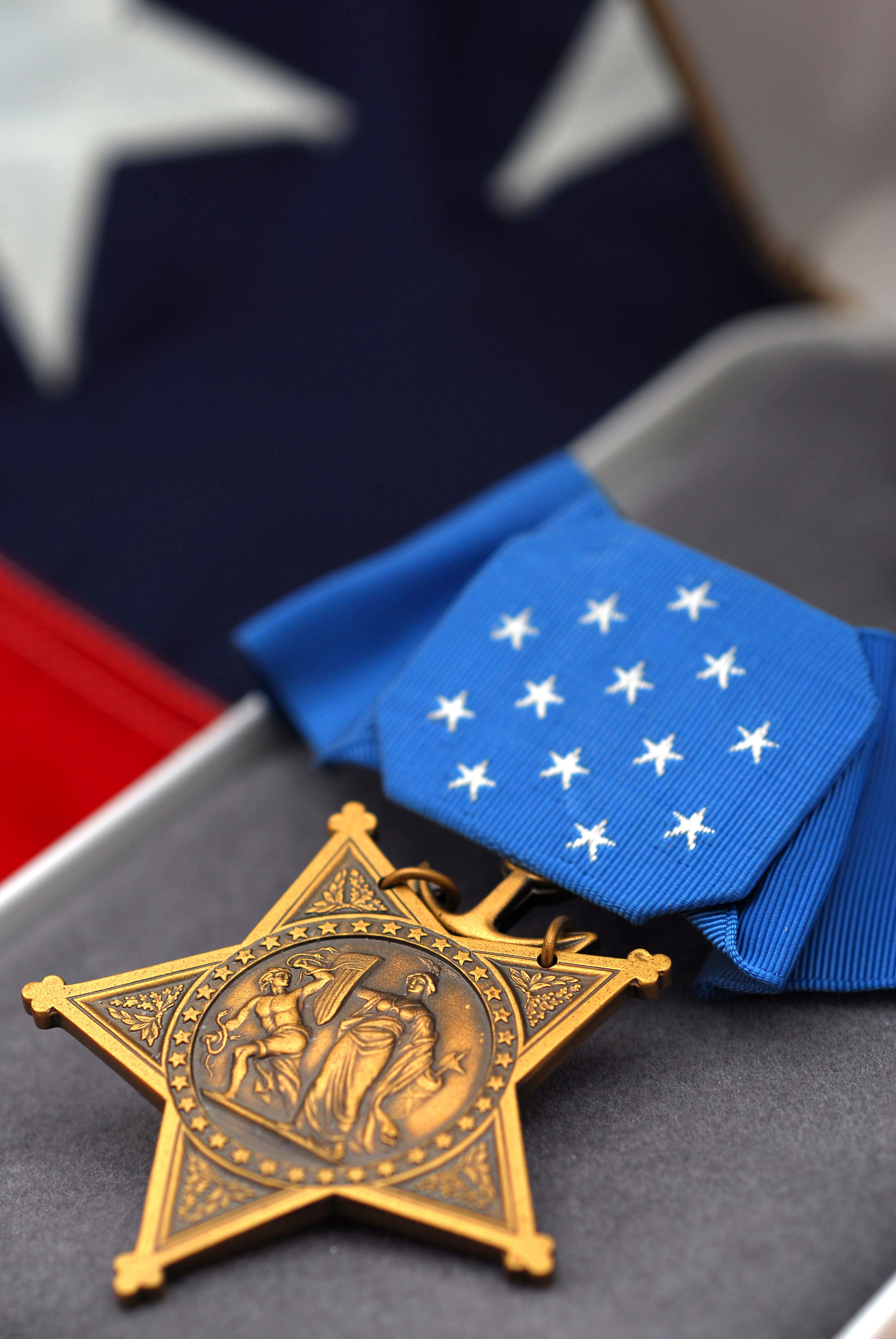 We lost one of our surviving Medal of Honor heros today leaving 97 living Medal awardees. I think we all need to take a minute to reflect on these brave American heros and take a moment to bow our heads in prayer and thanks.......

I'll Send You Some Of These Adhesive Labels If You Promise To Use Them To Spread The NavyDads Word!! 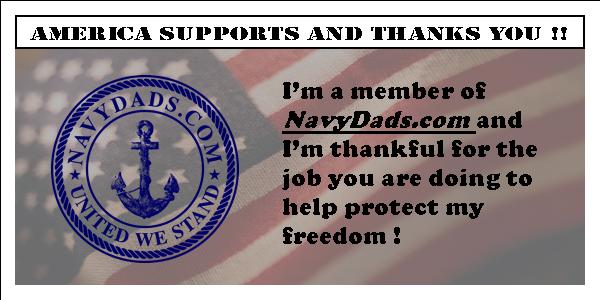 Had a text from Kat...said whe was flying with the Captain and CMC to Indiana for something and she'd call on Friday to fill me in......interesting.............

Each of Us Needs to ACT - Ask, Care, Treat 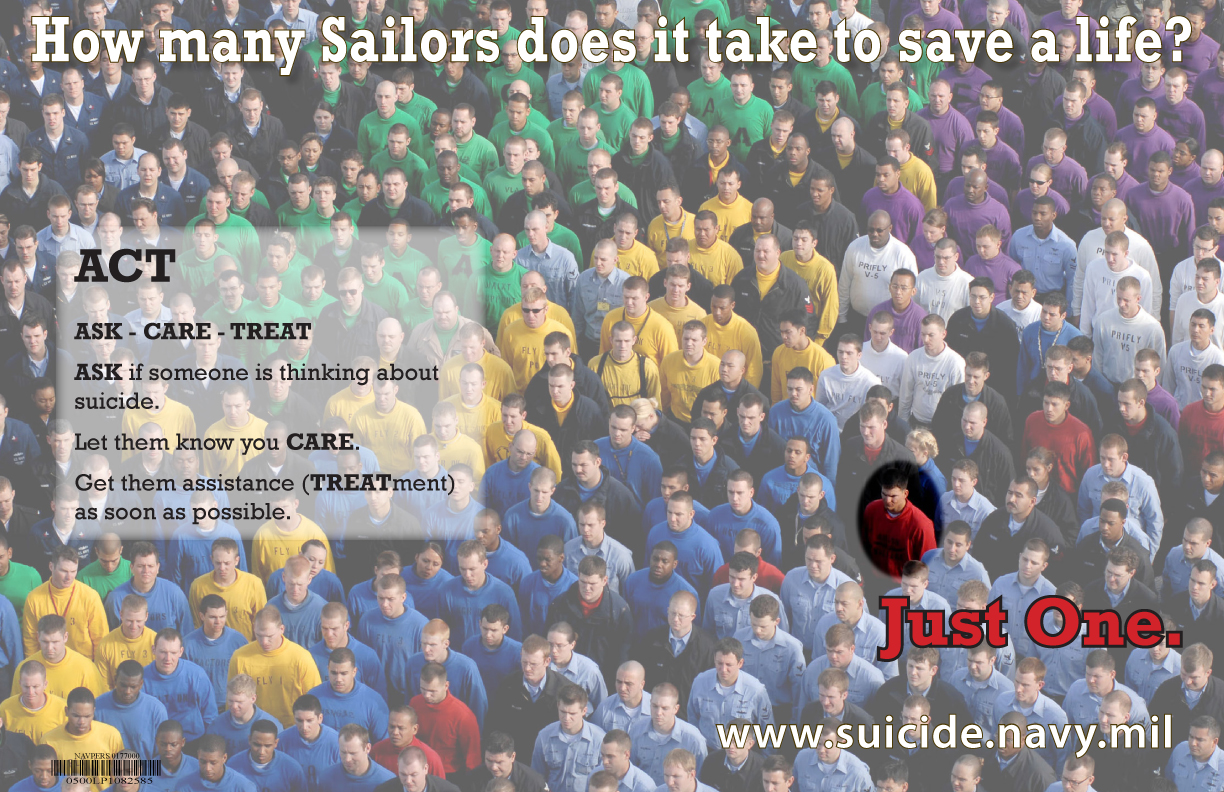 For more information click the photo and you will be redirected to learn some warning signs and things you can do to prevent the kind of tragedy that Mike has has to endure. 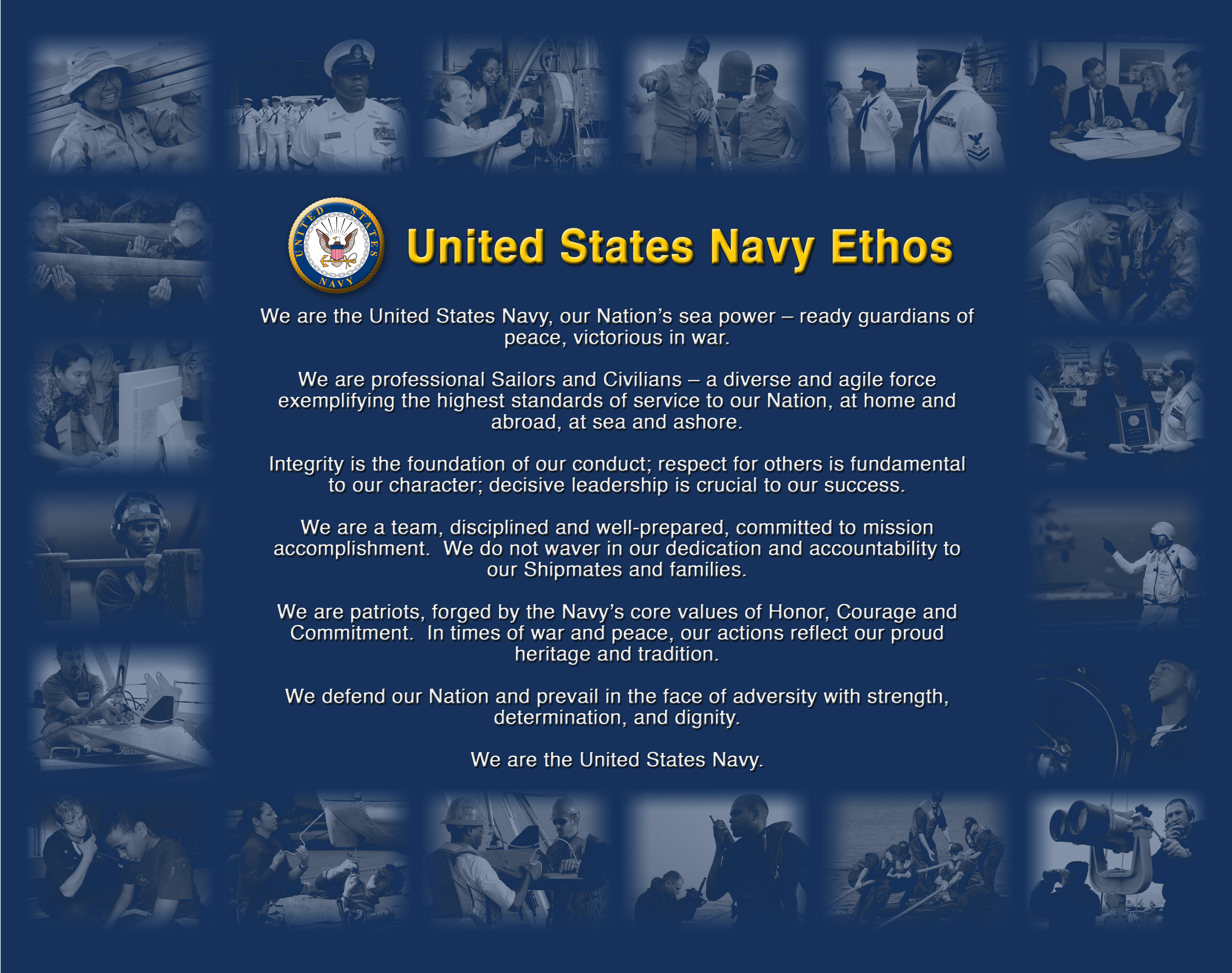