I know I musta had a grin from ear to ear after that shot as you try to absorb the experience and burn it into memory. The launch must be pretty violent as you sure can see the pilots head get jostled around in the cockpit as the plane accelerates. You can see the afterburners as the 18 moves down the flight deck….as soon as he clears the end of the deck the pilot goes into a clearing turn to port and the burners kick off. You also note the thin trails from each wing tip…at the wingtips vortexes cause a big pressure change and the water vapor in the air condenses into thin contrails…..it’s pretty neat to watch. 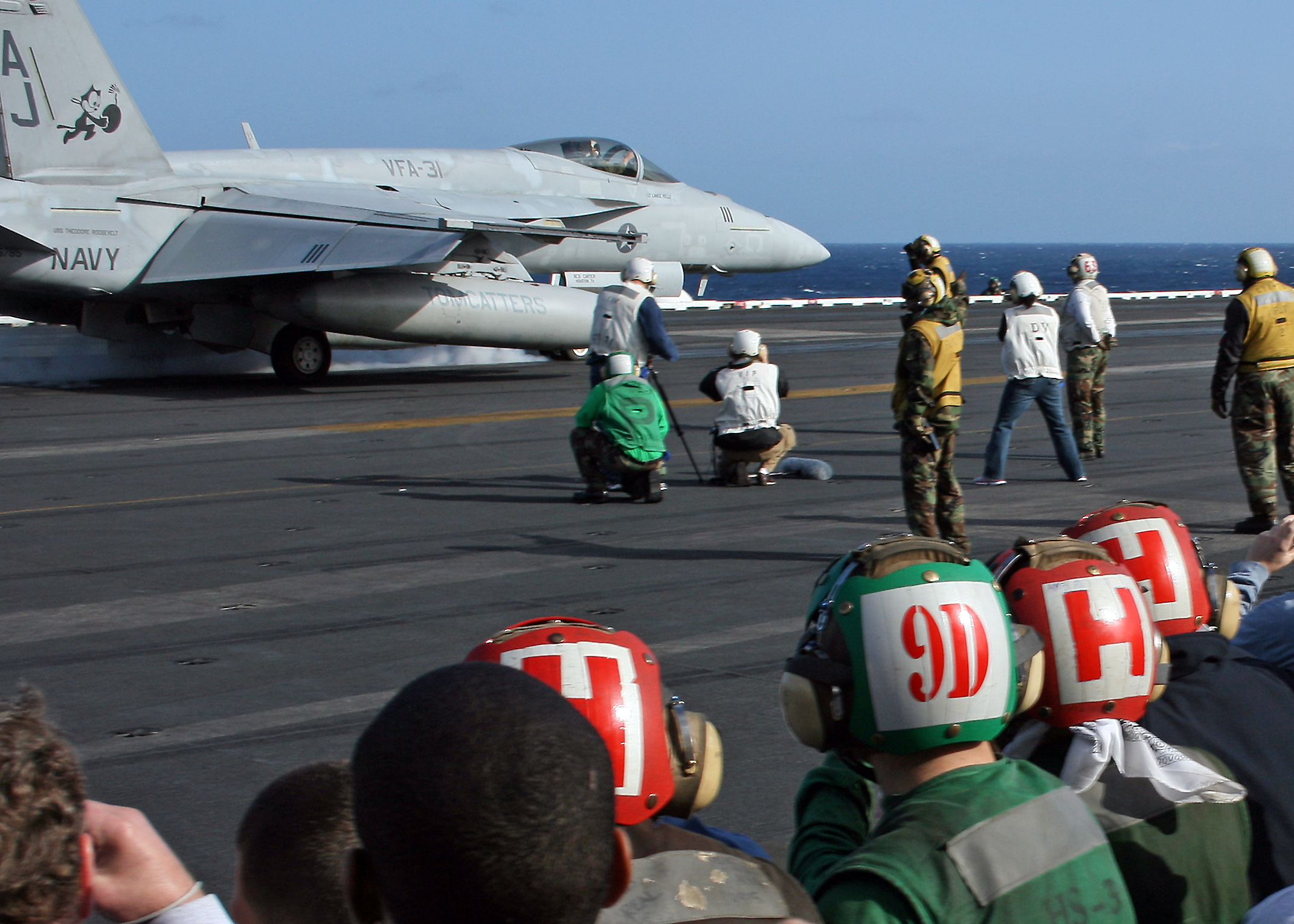 Turning your head you note a lot of commotion as another 18 has taxied up to the other waist cat and is getting set for its launch. It’s almost surreal….you’re a chemist from Arizona standing on the deck of a multi-billion carrier watching $40 million aircraft move around in very limited space and all being orchestrated by a bunch of enlisted folks in their late teens and early twenties. The responsibility that these folks have is enormous and they do that job for many hours each day, good weather and bad. 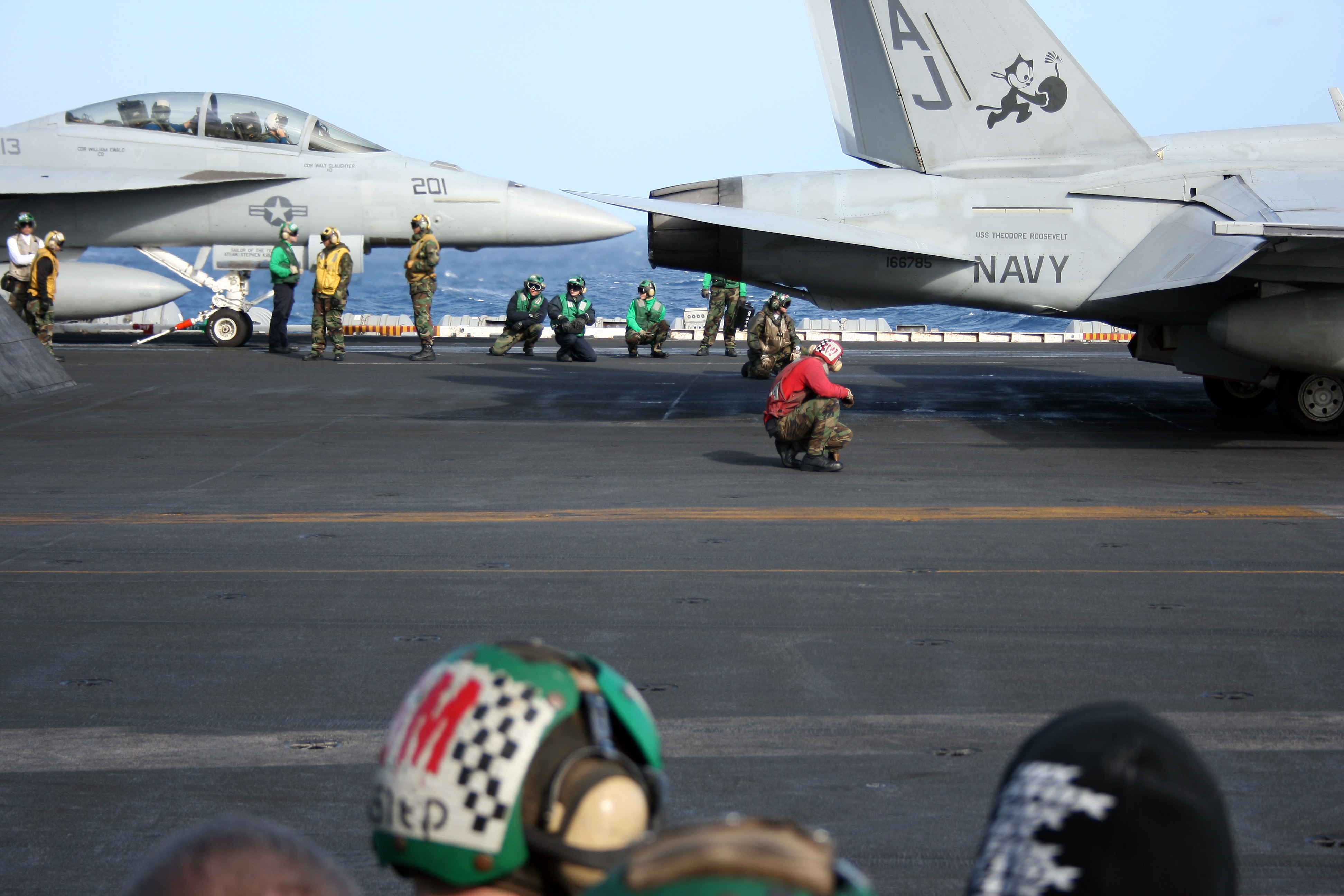 That kind of dedication carries through everywhere on the ship…you go down to the hanger deck and you see the same sort of dedication with those folks doing maintenance. It takes an awful lot of people doing an awful lot of work to insure the birds are flight ready and safe for the air crews. Anyway…..back to the launches……..its cool watching the colored shirts scamper around the deck getting the aircraft ready for the launch. You’ve got two rather large jet engines running and generating not only exhaust but lots of intake as well…control surfaces moving…tires (that Eric may have worked on) rolling around and people crawling all around the plane and under the plane. And no one gets hurt as they all perform their job tasks. If you look around the flight deck you see the crowd…there were 1292 Tigers on board and I think each was on that deck watching intently. Our sponsors also were on deck so it was a pretty crowded space….I have long arms and am pretty tall so by setting the camera to continuous mode and holding it as far up as I could I got lots of photos of the entire operation….also took lots of photos of heads and the like, but it is easy to discard those from the computer. If you look at some of the other photos you see an awful lot of cameras on outstretched arms….I guess I wasn’t the only genius on board that morning!

Back to the F-18’s……..so the fighter is directed into position over the cat. It slowly inches up until the bar engages the shuttle and the hold back bar is installed. The jet blast deflector is raised….the engines generate a lot of exhaust and the JBD directs that rather warm air up and safely out of the way. The JBDs are concrete and raise and lower hydraulically and when down are flush with the deck surface. Once again control surfaces are tested while everyone looks for a problem…if ok, the shooter indicates to take up tension on the shuttle, the engines are ramped up, the burners kick in, the pilot salutes and the plane is launched off the carrier. It is an amazing process to see in person. While this is happening, another 18 is directed onto the clear cat and the process repeats on alternating catapults. It is pretty amazing just how fast you can launch the fighters and you realize that every move is carefully choreographed to maximize efficiency without sacrificing safety. Really before we knew it, two squadrons of planes had been launched. I bet though at night that the environment is a whole lot more tense as visibility is limited, and during combat ops there is no extraneous light allowed on the ship. 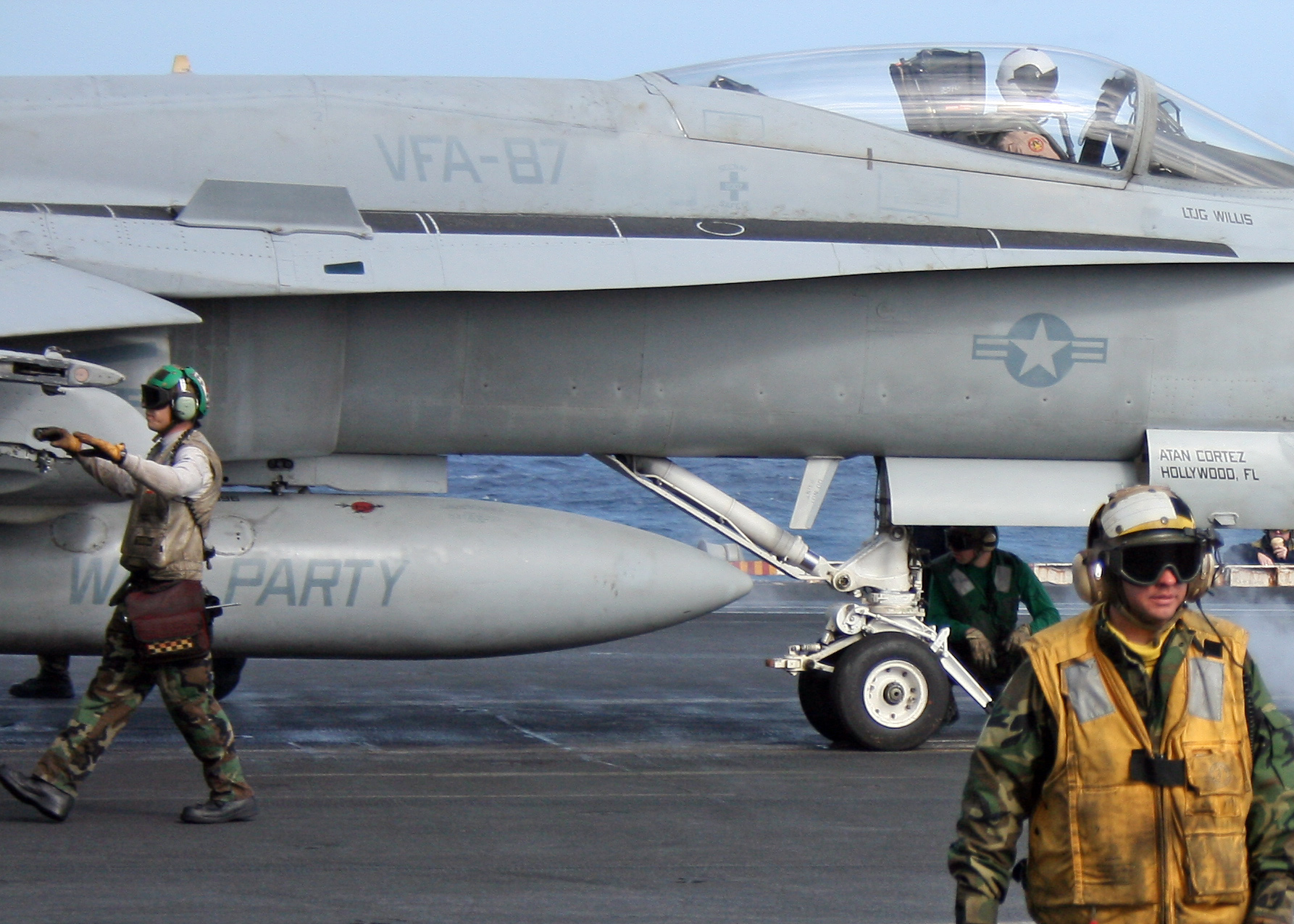 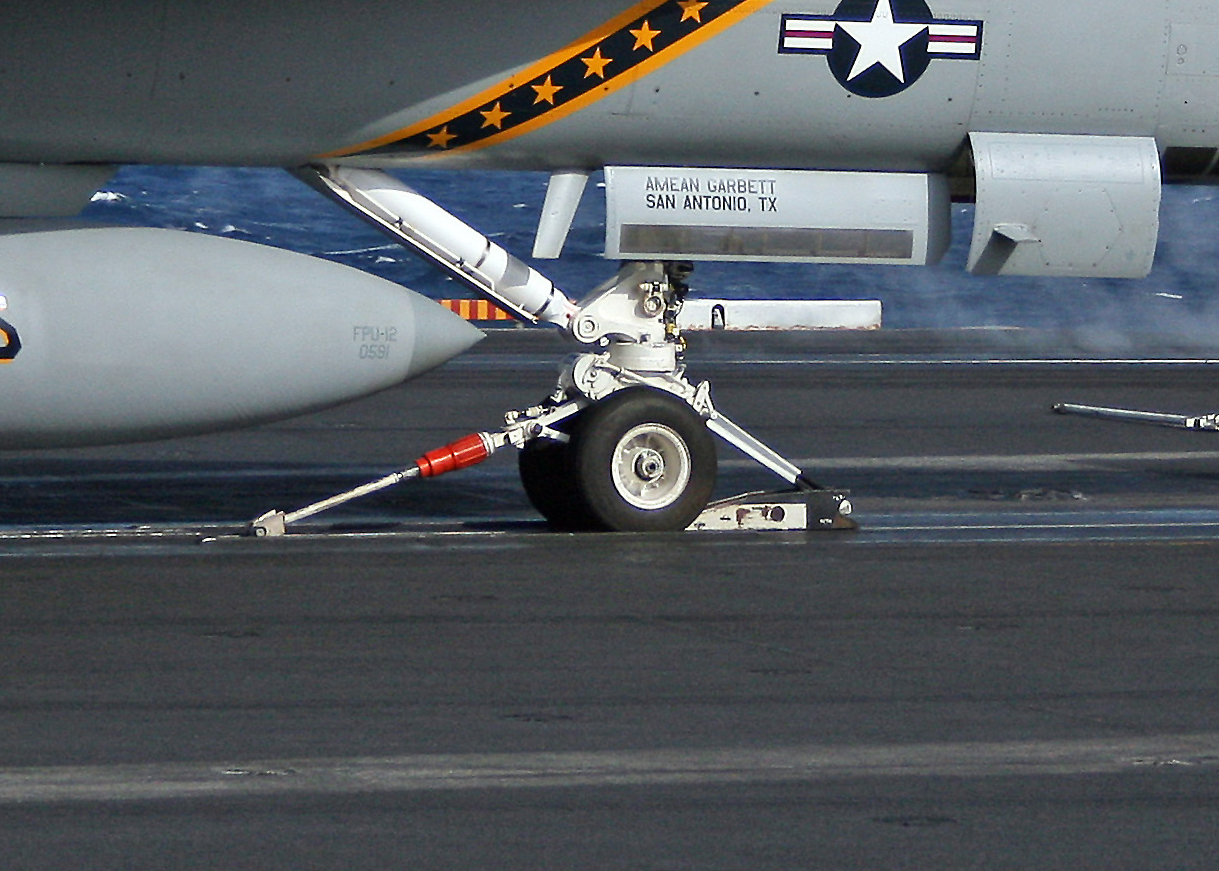 Soon enough all the fighters are in the air and the crowd is allowed to move to the port side of the ship. It is nice to stand on the cats, excess steam escapes and there is a lot of warm air coming up from the cat track that heats up the feet and lower legs. I mentioned that it was pretty cold on the deck, and it was nice to get some heat on the feet. There is a odor to the air….warm grease from the cats mixed with the steam and the exhaust of the jets still in the air…hydraulic oil…JP-5…all in all a sensory experience! When you combine that with the heat from the cats on your feet, while the wind is blowing cold sea air across your face and head, blue seas with whitecaps and broken clouds in a blue sky you start to really feel and smell things you just don’t get to on land.

Soon we heard an announcement from the tower….two 18’s would demonstrate aerial refueling from left to right. You see the two aircraft approach flying in close formation. The upper aircraft has buddy stores attached below the fuselage and is refueling the lower aircraft which is slightly behind….it is pretty amazing to see up close like that. Only through the ability to refuel during flight and the range of the 18’s be extended to provide an operations radius deep enough into land to be effective. 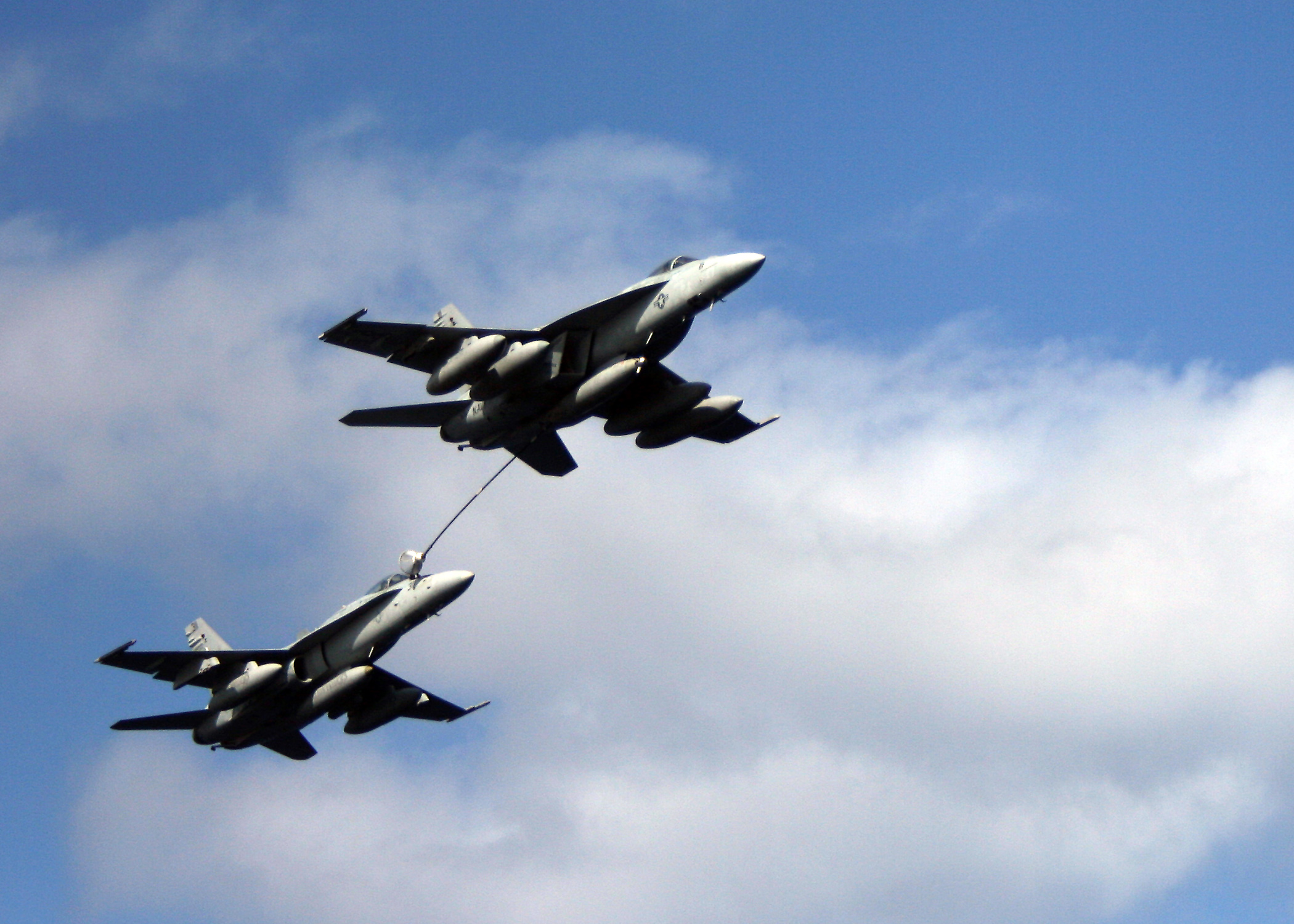 A couple of Hornets performed an aerial combat demo for us next. It was cool to watch how the target plane would try to evade his pursuer while popping decoy flares….all the while the attacker was trying to out-maneuver his target to get into a firing position. One can only imagine what kind of effort it takes to try to say alive by not becoming a target all the time while maintaining controlled flight. The same holds for the attacker….trying to “read” the movements of his target and position himself in three-dimensional space so as to fire a missile or gun, all while also trying to maintain controlled flight……I have to really hand it to those pilots and can only imagine the intensity and effort those few seconds must take. In a few minutes the two planes in the combat sim flew up the starboard side of the carrier…. 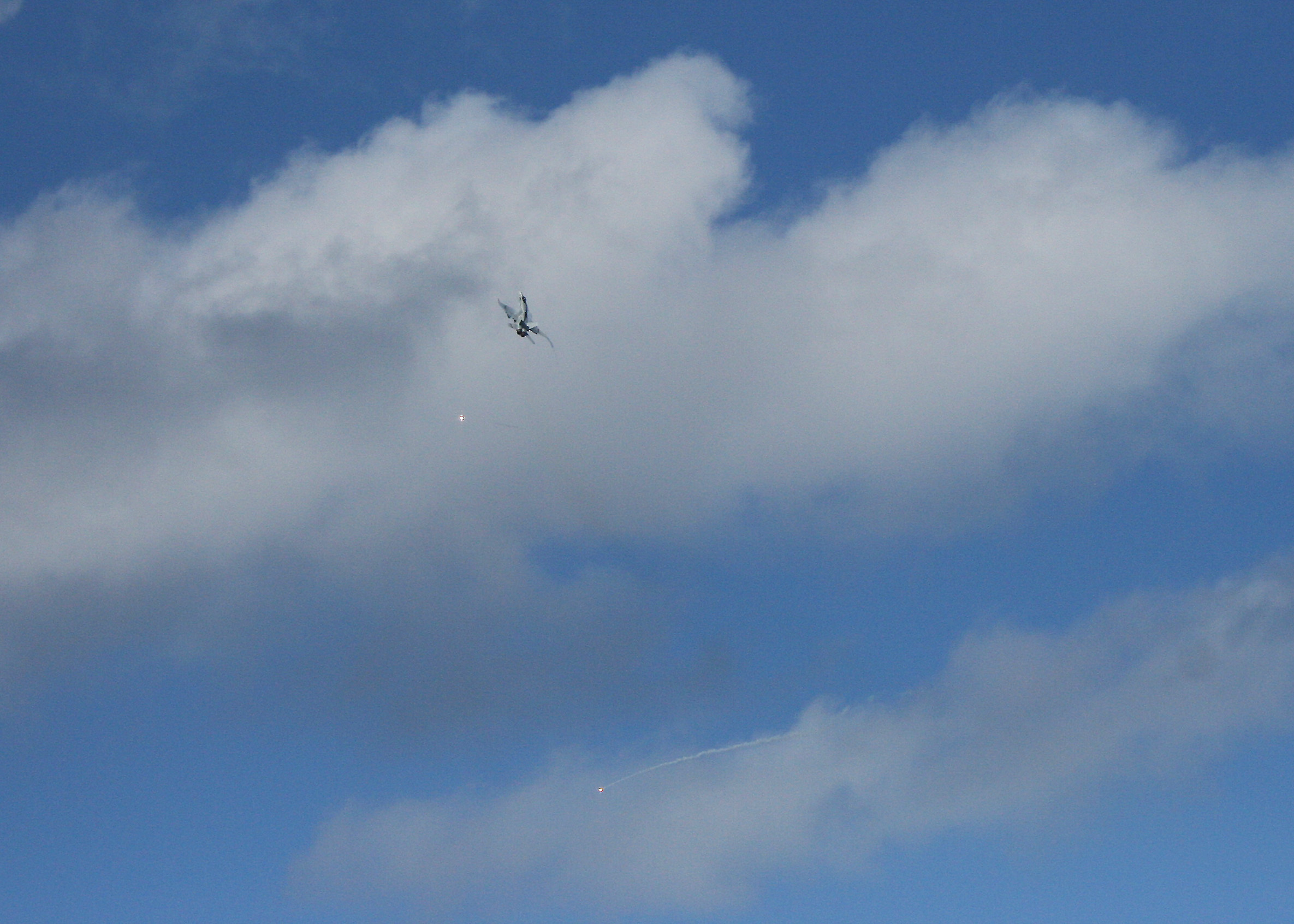 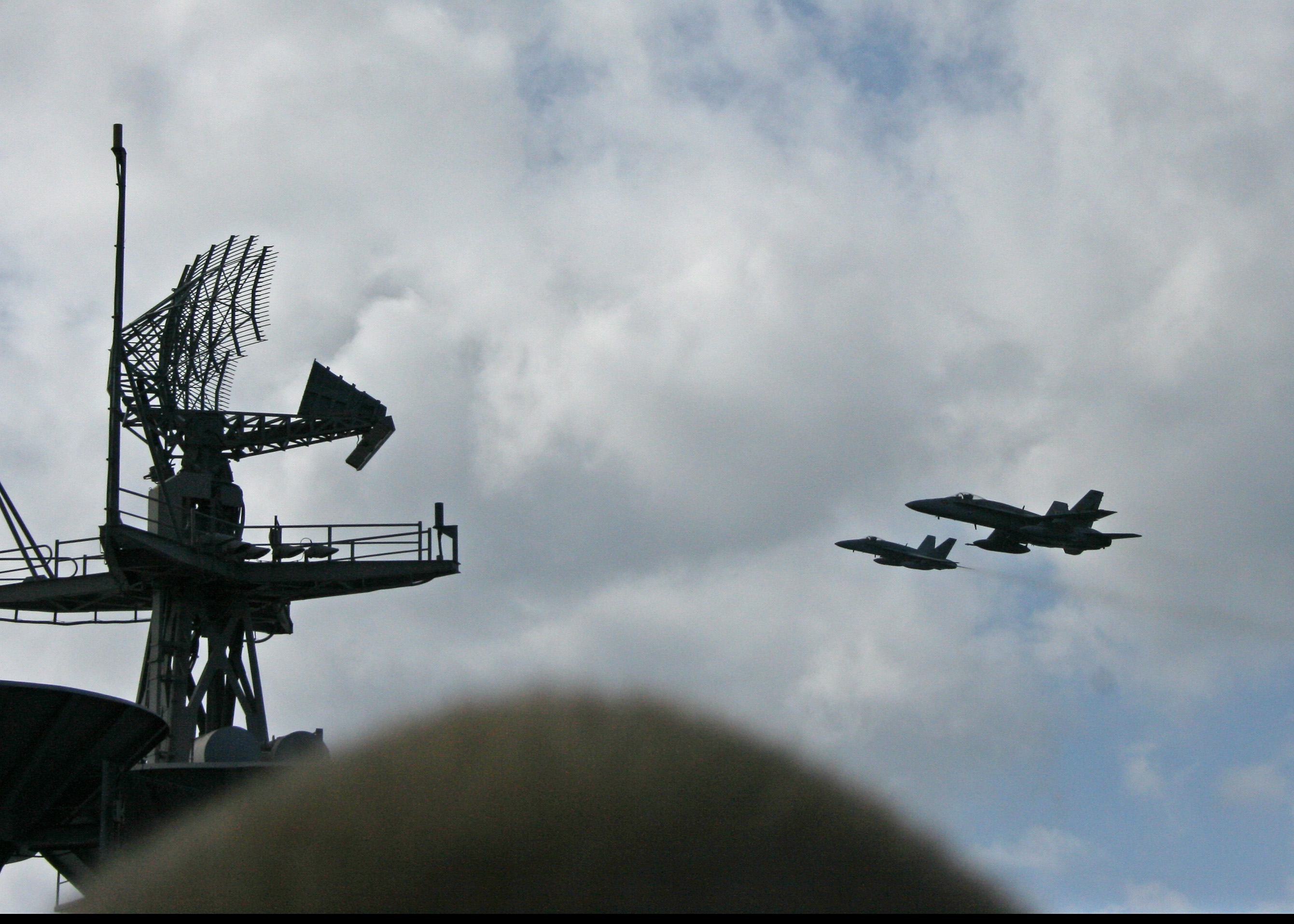 Quickly following was a ground engagement demo: a strafing run, once again with decoy flares to demo the effectiveness of the multi-barreled gun that the Hornet uses. It is amazing to see the spray thrown up by the 20mm rounds impacting the water….much better to be on the firing end of that gun than the receiving end for sure! A couple of Hornets then dove in and dropped some dummy 500 pound bombs to simulate a bombing run. 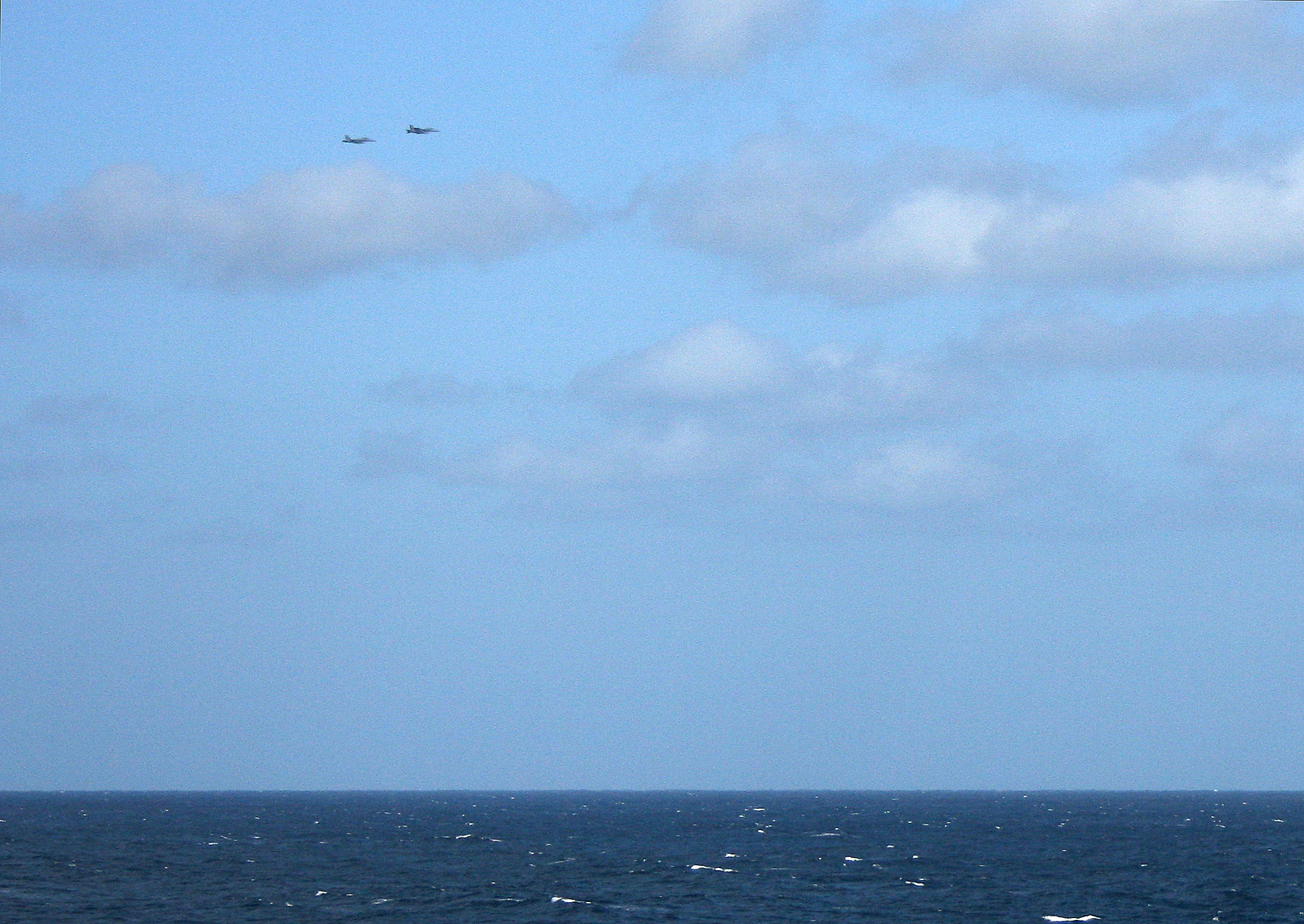 The next demo was pretty impressive…a solo 18 came in from the left at supersonic speed. You could see he was moving pretty fast and you didn’t hear anything until he was past you….then the sonic boom hit. You could feel the pressure wave as it impacted your body and you understand how shocked the bad guys would be to be on the receiving end of a sneak attack like that…..you’re having a fine day cleaning your AK or building IED’s when your day gets bad without you even hearing the plane approach. I used to hear sonic booms all the time when I lived in the high desert of Northern Nevada years ago and you always heard the classic double boom-boom…this was close enough to only hear the single boom and has been the only time I’ve ever experienced that! I loved it and had another ear-to-ear grin on my face….then I noticed everyone around me did too!!! 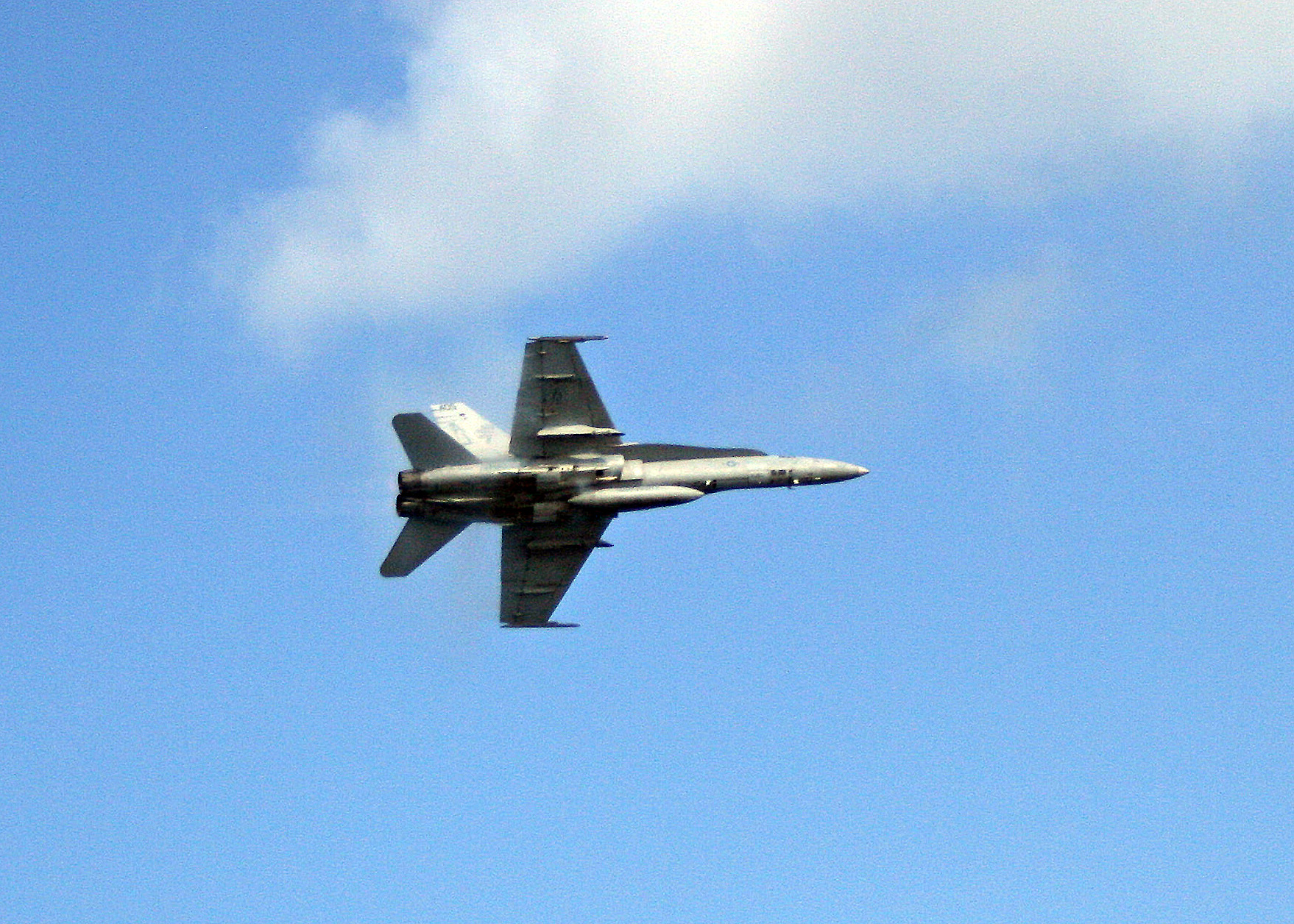 Next a change of pace….remember the E2-C Hawkeye that launched at the beginning in Day 2, Part 1? Well he did a fly-by as well. There is sure a big difference in velocity of the Hornets and the Hawkeye which gave all a good chance to see and hear the “radar eyes” of the fleet fly by. Though the plane is getting a long in the tooth with the first airframe flying in 1964, recent upgrades have given the plane a new lease on life and it continues to provide a pivotal role (“detect and direct”) in air operations for the carrier. It is cool to look at the new style eight-blade props that are curved…they are quieter and more fuel efficient than the older and traditional four-blade style. The Hawkeye is the largest plane to fly off a carrier and I’ve read because of the wingspan there is only a four-foot margin of deviation allowed from the centerline of the carrier flight deck on takeoff. It also does not have digital flight controls, so I guess the pilots are really stick and rudder pilots. I imagine with that with a 24-foot radar dome it has some interesting flight characteristics when landing. 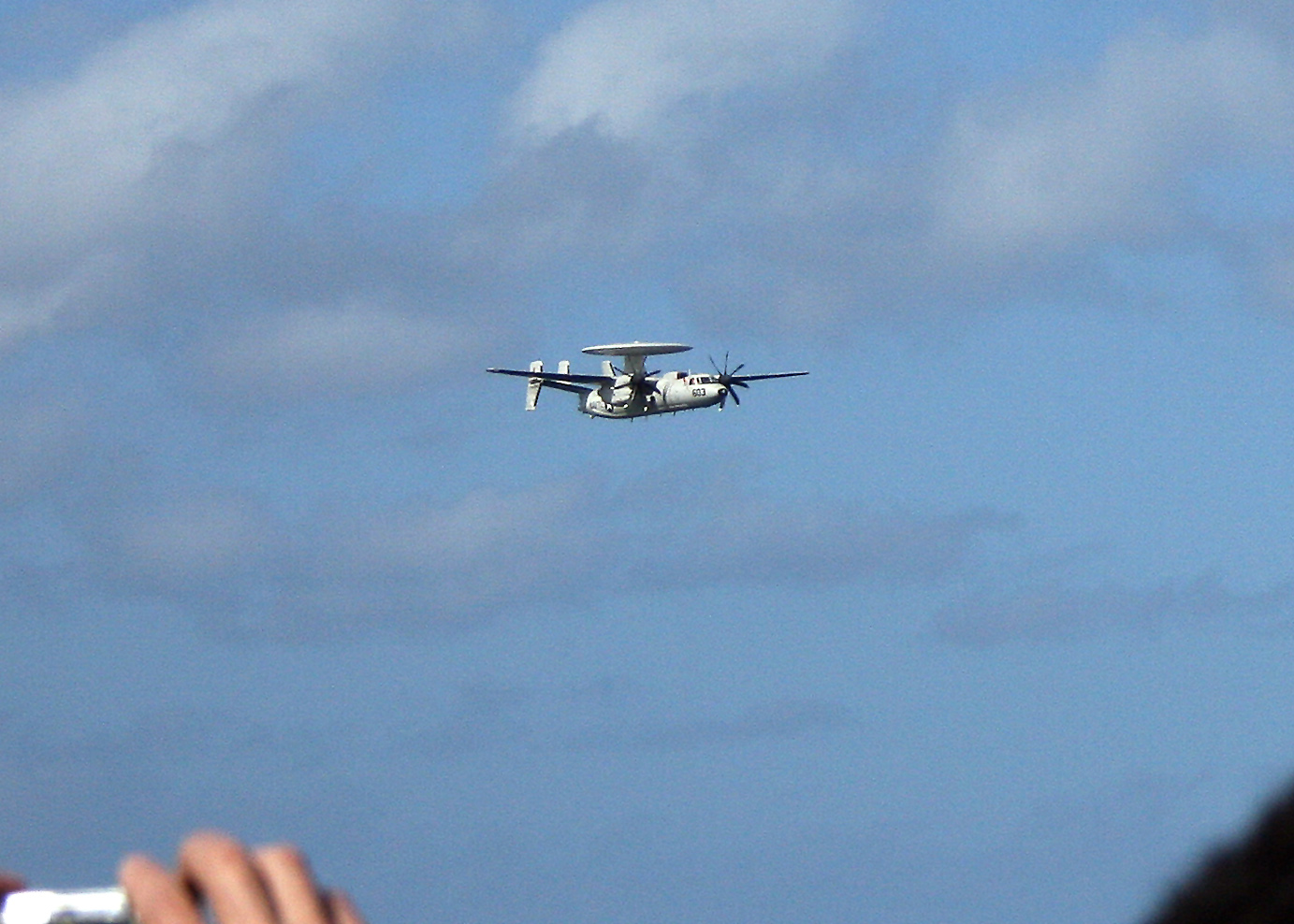 For a change of pace, a SH-60 Seahawk helicopter few up to the aft end of the flight deck and did a demo of “fast roping” where the chopper hovers and ground troops do a fast rappel to the surface. It is a way of rapidly inserting troops into a unstable landing zone….as soon as the last troop has hit the deck, the chopper accelerates away so as to minimize the chance of becoming a target for either small arms fire or worse. This was followed by another SH-60 flying the flag past the carrier….I’m sure it gave everyone shivers to see the flag fly past the ship and gave all a reminder that the USA is a pretty darn good place to live….I know it made me proud to be an American! 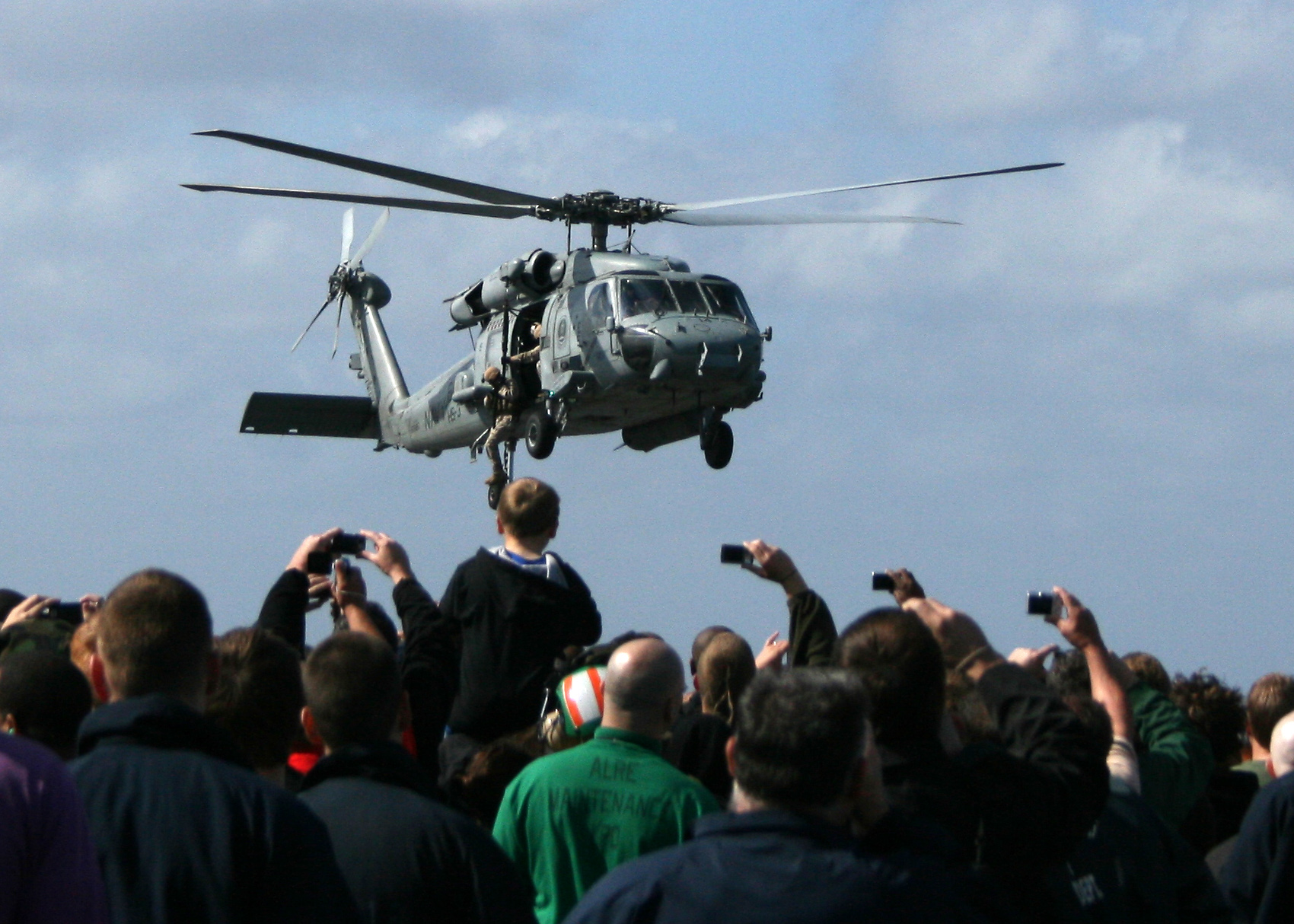 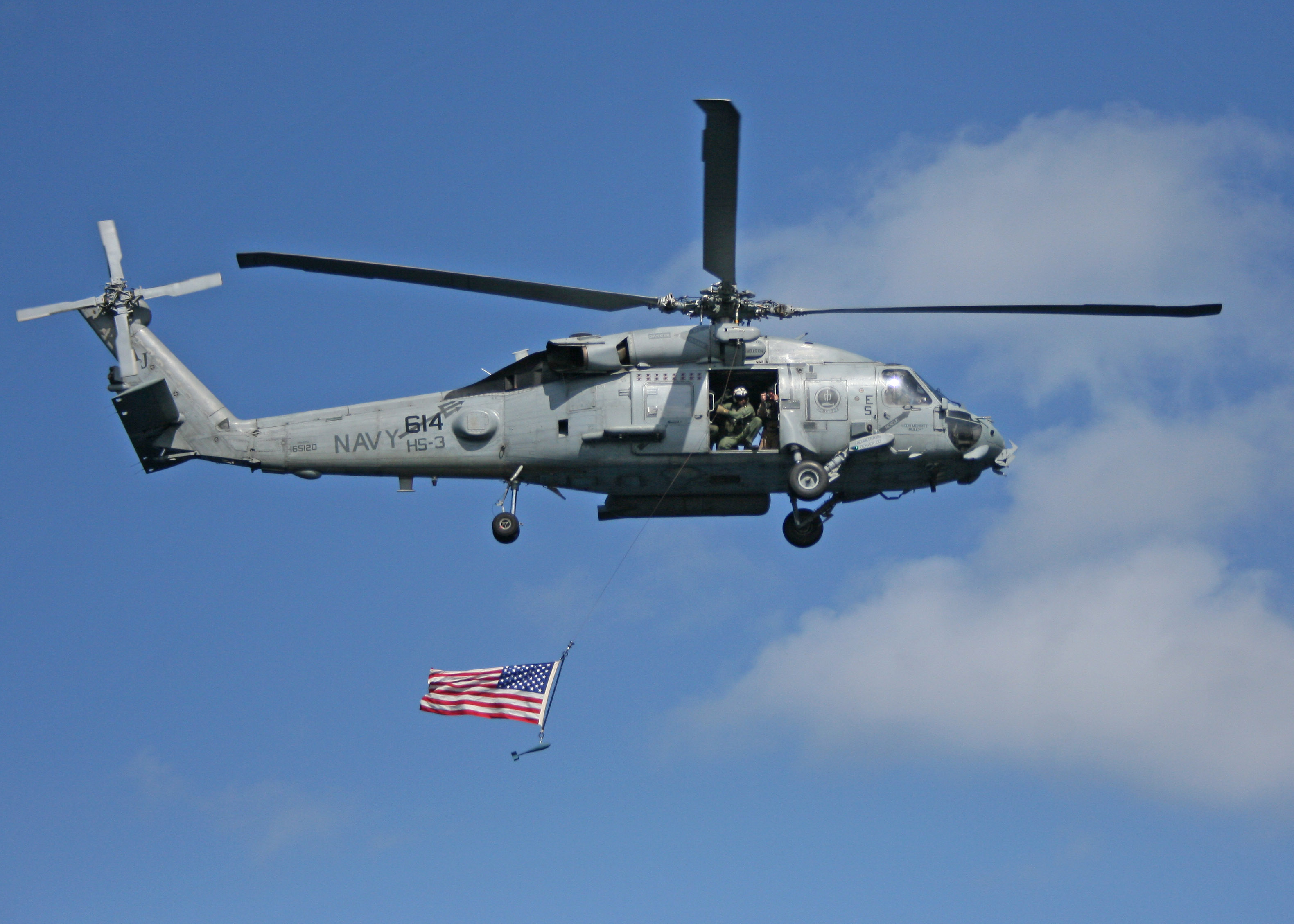 All knew that the air power demonstration was winding down but the final flyover was really spectacular. The two squadrons of Hornets along with the Hawkeye performed a precision formation flyover….you could see the 12 fighters and the Hawkeye flying in and soon the few right over the carrier….the feeling you get is pretty amazing and you swell with pride that your son or daughter is part of this magnificent vessel and that very few civilians in the world have been able to see the show you’ve just seen from this particular vantage point. My hat is off to the officers and crew of the USS Roosevelt for giving me the honor and privilege of allowing me on the flight deck to see first hand what Naval aviation is all about and for giving the chance to see what my son is part of. It was truly a memorable experience that I will never forget….and the day was only half over! 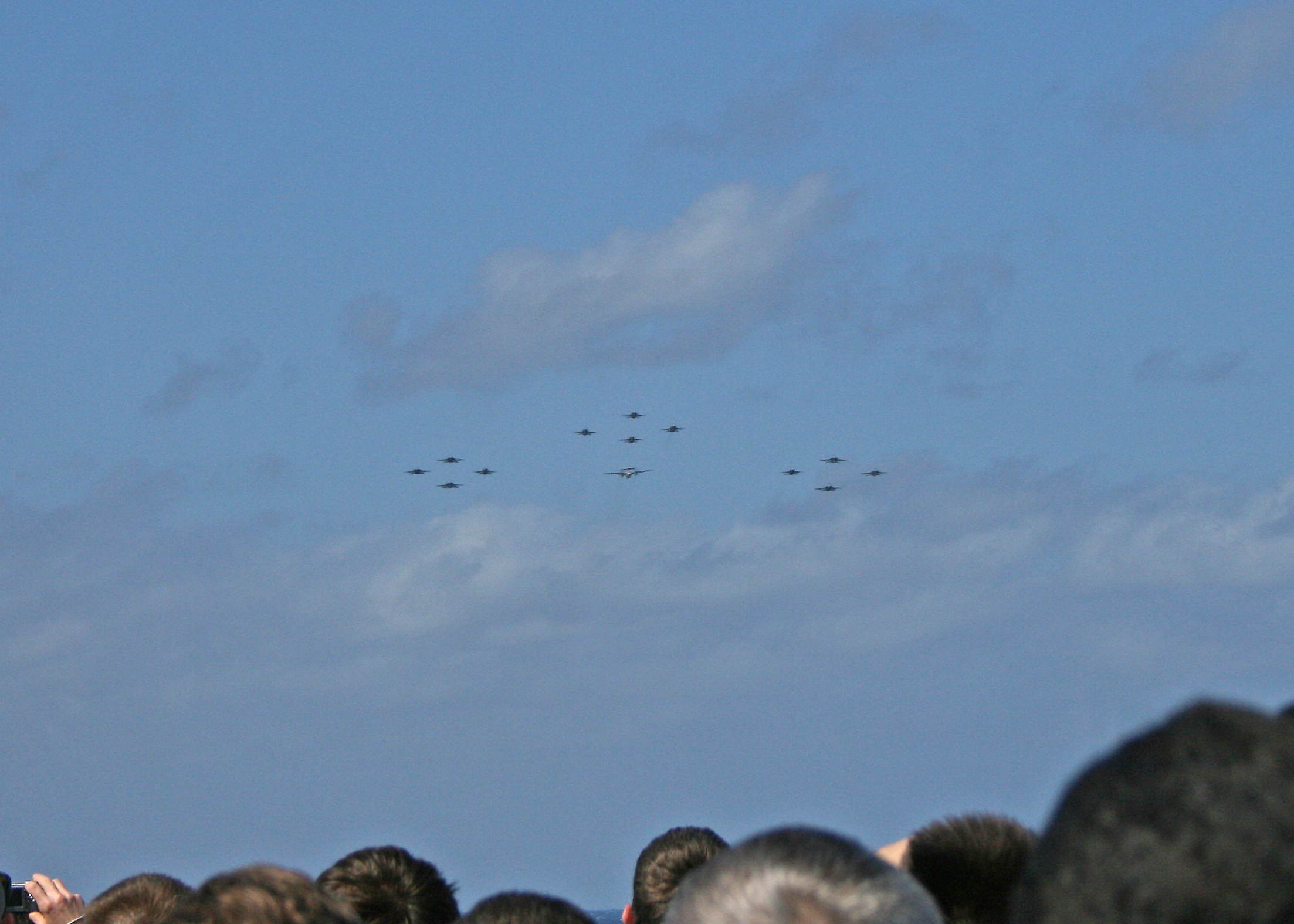 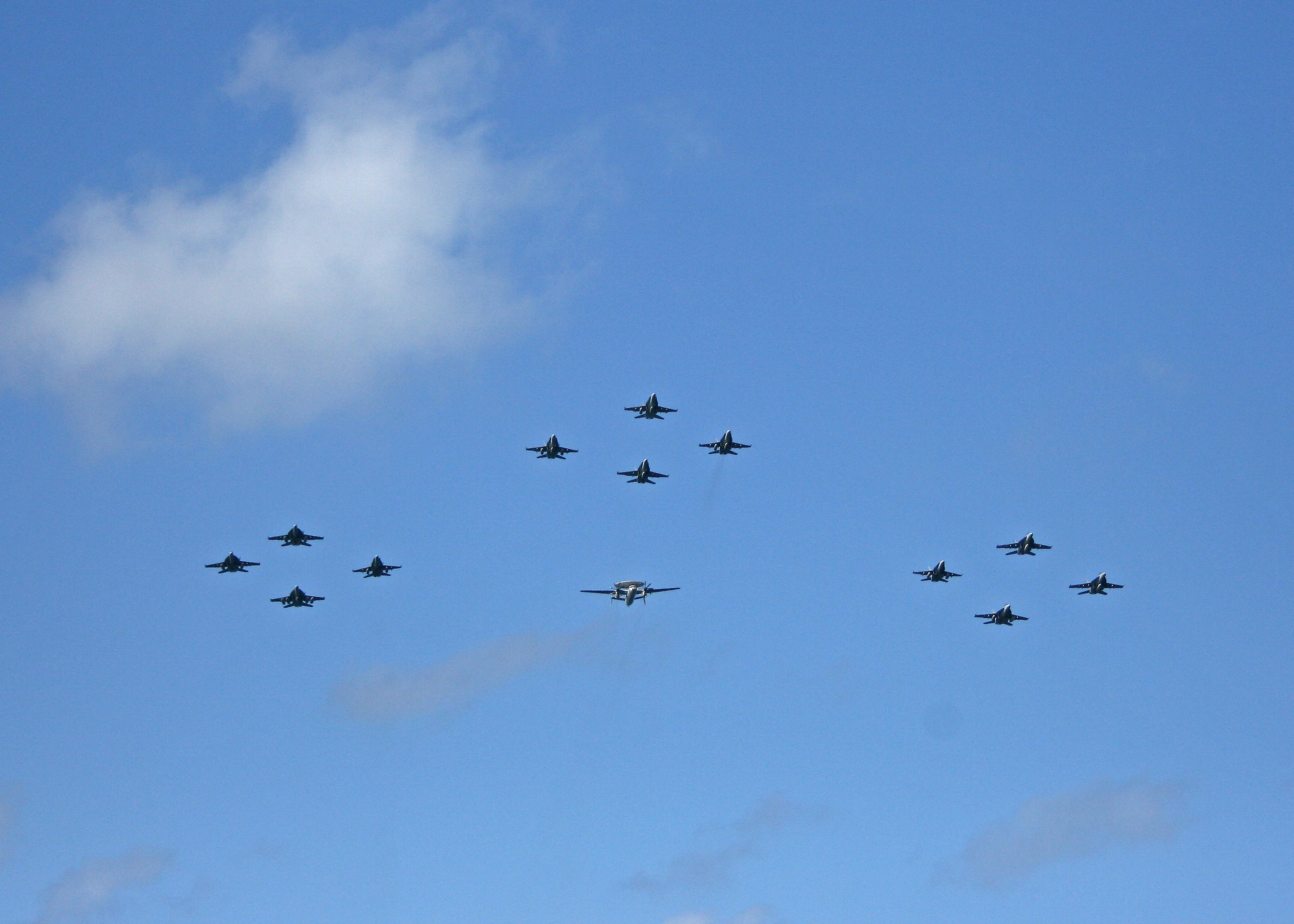 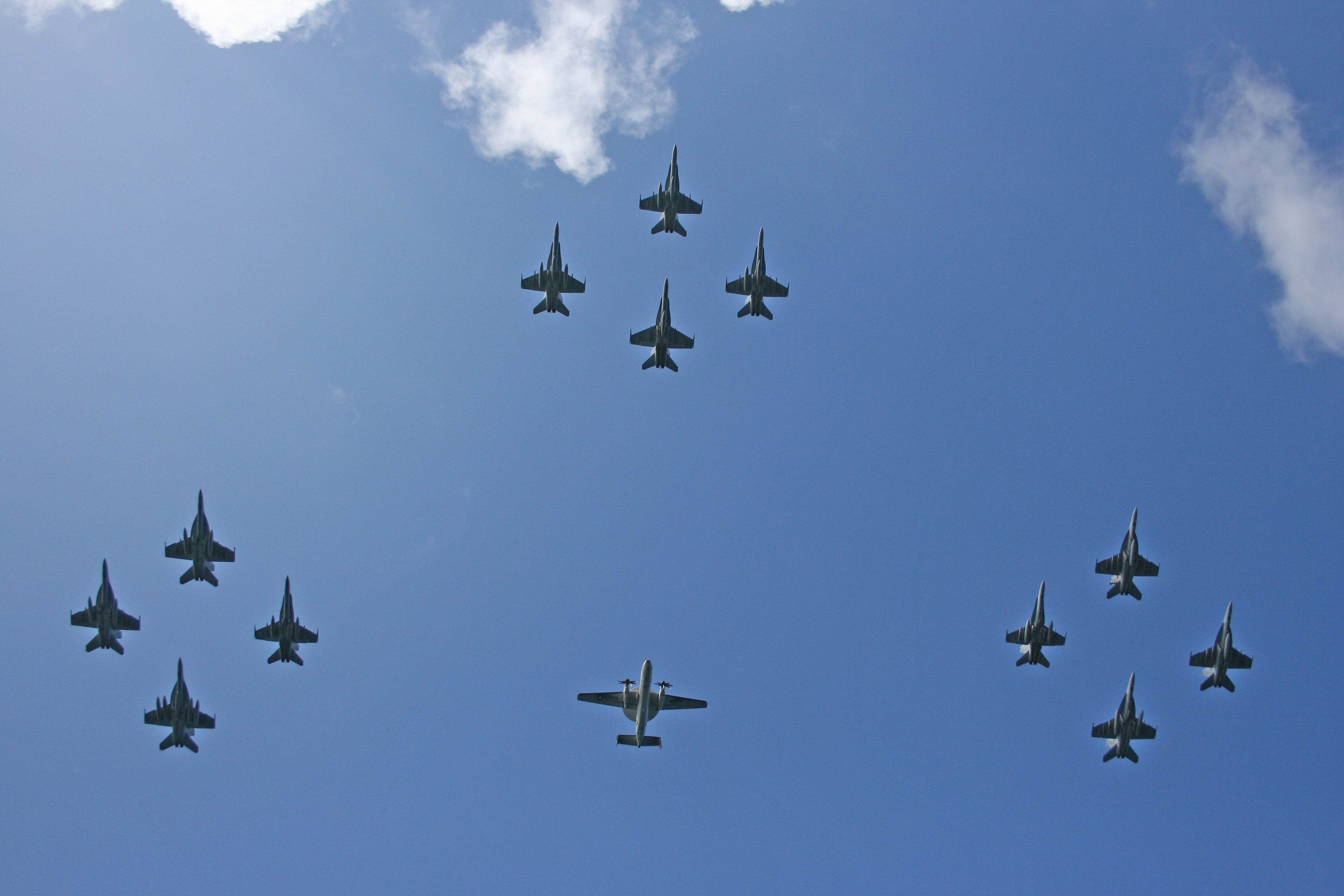 Soon we heard a voice of the speakers asking for all to clear the flight deck so the ship could recover the aircraft. For safety reasons none of us were allowed on the deck during landing, but when the birds came in you can feel and hear the noise of the plane catching a wire and the arresting gear bringing the aircraft to a safe stop. Memorable!

Comment by Luis Antonio Galindez on July 2, 2009 at 9:47am
Your pictures and comments were SUPERB ! You answered many of my questions based on what my son will be doing as his job once he finishes A-school in Pensacola, FL. Again, GOOD JOB !