As I said in Day 1, Part2, sleep didn’t come easily for me….think more so the unfamiliar place and excitement than anything else. I’m also used to a very quiet environment- not at all like an active aircraft carrier. I really cannot imagine the noise level if they are conducting ops at night, though both Eric and Kat have told me that they are so used to the sound of the catapults and arresting gear that they have trouble sleeping in the quiet. The racks are pretty comfortable once you get used to the limited nature of the space and having a ceiling just a few inches above you. At 06:00 Eric poked his head in as we had agreed to make it an early day. I’m still not sure how I managed to wiggle out of the rack as you have to exit feet first without sitting up. Off to the head to clean up a little….so lets see…outta the rack, turn left…turn right…no wait it’s another left and turn through the doors to the head. The ship was still moving a lot so certain bodily functions have to be adapted to the ships movement…and there are grab bars everywhere in the shower stalls and toilet stalls.

Followed Eric back to the Tire/Wheel shop and then over the AIMD airframers shop where they had a coffee pot going….nice to have some hot coffee and naturally some good natured banter between the sailors and other Tigers,

Everyone was always asking how I liked the cruise so far and what I thought of the ship. Nice to see such interest and whenever I met someone I always welcomed them back to the United States- THAT always got a big grin as I think all were more than ready to touch US soil again after seven-plus months at sea. It was interesting walking around with Eric as he said on more than one occasion that the whole atmosphere of the ship had changed…..it was awfully low-key and relaxed compared to “normal”…I always blamed that on the Tigers being on board, but I know that the thought of “one more day and then I’m home” was the real reason and totally understandable….even the officers I met shared that thought….I guess I had never really thought about the feeling as they came back from 67,000 miles of cruise….I knew that pulling into Norfolk with all those families there was going to be something special and memorable.

I knew that today was going to be pretty special as the captain had told us the prior night that he felt confident that the air power demonstration would come off as planned in spite of the winds and seas….all were looking forward to that. I had to laugh to myself thinking about sitting in the lounge areas the night before….here we are on a war ship returning form seven months of overseas deployment….what were the most popular shows on the TV the night before? Dangerous Catch and anything about World War II naval battles. You could almost see the sailors recreating the battles in their mind as they watched the shows about the Battle of Midway and the Battle of Leyte Gulf.

Anyway, we skipped breakfast- neither of us felt like fighting lines and we really we not hungry…that would change later we figured. The airpower demo was scheduled for 09:30 so after killing some time and just hanging, the word came down to assemble on the flight deck from the starboard side forward of some frame number I don’t recall. We were way forward of that so I did my lost puppy routine again and followed Eric up to the flight deck after grabbing some “foamies” (foam ear plugs). They had given us each a pair in our Tiger Cruise grab bag, but I had grabbed a few from work that I know provided a 33 dB NRR…I wear those to the drag races, and while not really enough for 2 fuel dragsters at full throttle, I figured they would do in the non-confined flight deck for a fighter.

Now for you that haven’t had to chance to climb onto the deck of a moving carrier, let me try to describe some of the feelings. You exit the hatch onto a covered walkway with grating that you walk on. Depending on which route you’ve taken, you can often look down through the grating to the water below…about 60 or 70 feet below so it makes you pause for a second if you don’t expect it. Then up a short, but steep flight of stairs to the level of the flight deck….the stairs are narrow…about a single person width with really no hand rails to speak of. At the top of the stairs is a small platform typically with a step …one step onto the metal step , one more step over the rail and you’re on the flight deck. There isn’t much to hold on to, so you do a serious act of faith thing, look brave and like you know what you are doing, step onto the flight deck and there you are…..wind blowing a thousand miles an hour and cold……..quite cold. But the view is amazing…..there is nothing to block the view from the flight deck save for people, planes and the tower. Otherwise you have a $5 billion dollar view of the ocean and the sky and you start to understand the lure of the sea. 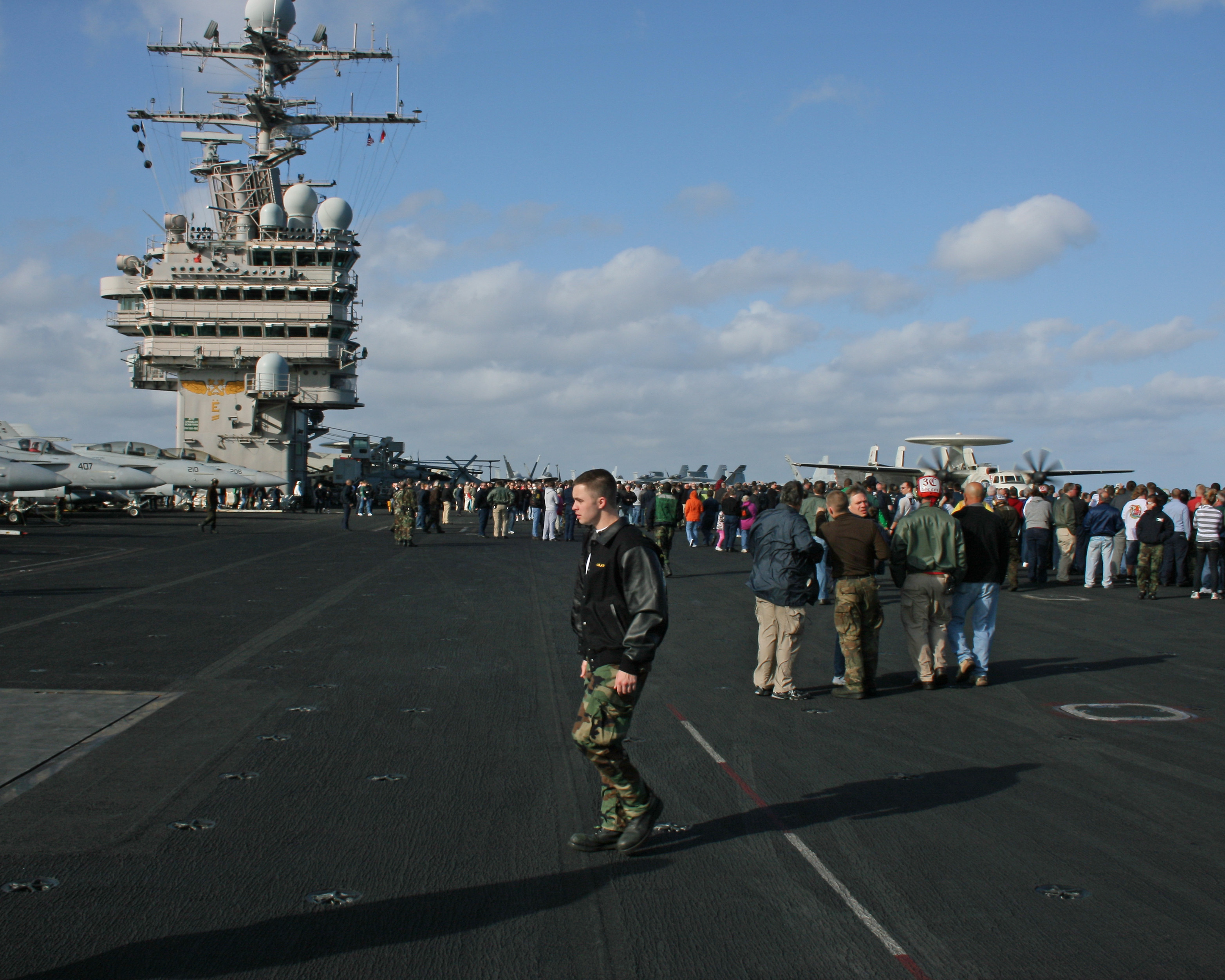 The color is quite blue…the further out you go, the bluer the water gets and it provides a stark contrast to the whitecaps. You continue to look around at the parked planes and all and realize that if you looked between two of the F-18’s parked on the deck you can see one of the escort destroyers. I think that is when it really hit me that this is serious stuff we were all looking at and that I was guest on a working, active warship. Very recently planes were flying off that deck with live ordinance and that some bad folks on the ground probably had a very bad day as a result.

So anyway, then you realize you hear some jet engines at idle-- there is a E2C-Hawkeye staged at a waist cat, tons of other Tigers lining the flight deck, and green- and yellow-shirts hustling around the plane. Eric had told me the new prop design was a lot quieter than the traditional 4-blade prop and I really was surprised how muted the sound is…of course they weren’t at takeoff power and didn’t have any pitch to the blades. Soon enough they ramp up the power, blades increase in pitch, the cat fires and the plane is airborne in about 2 seconds. 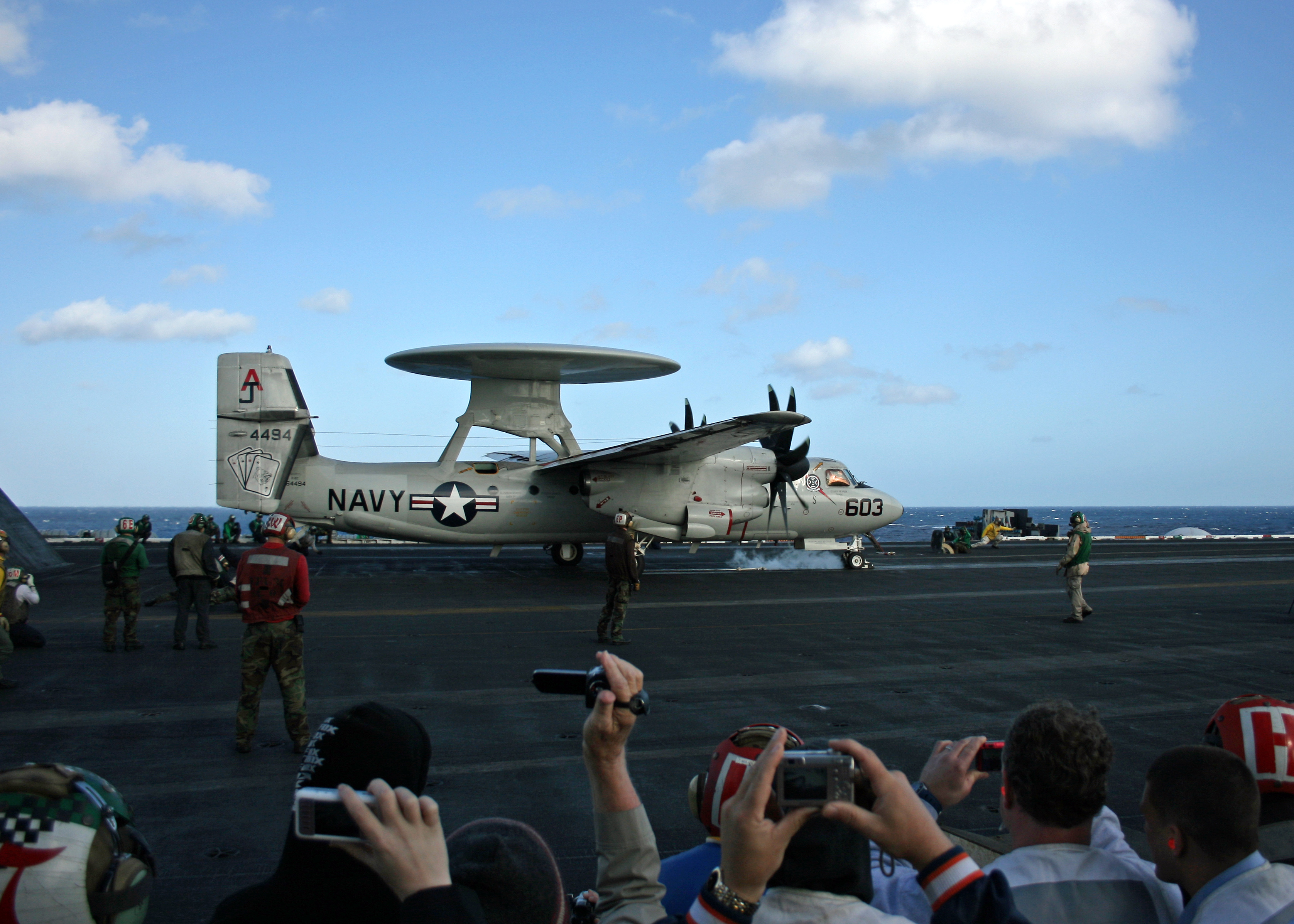 You’ve seen this stuff on TV, and if you’re like me you’ve watched it over and over, but being about 50 feet from the wingtip as the cat fires is pretty hard to describe….kinda like trying to tell someone how a perfectly grilled ribeye tastes. The cat fires and you see the shuttle pulling the plane as steam starts to billow out of the cat. The acceleration is pretty darn fast though not like a fuel dragster….still they go from zero to about 160 knots in about 2 seconds. Off the flight deck and right away into a clearing turn to port. The JBD (jet blast deflector) drops and right away you hear a 18 increase power to maneuver into position. 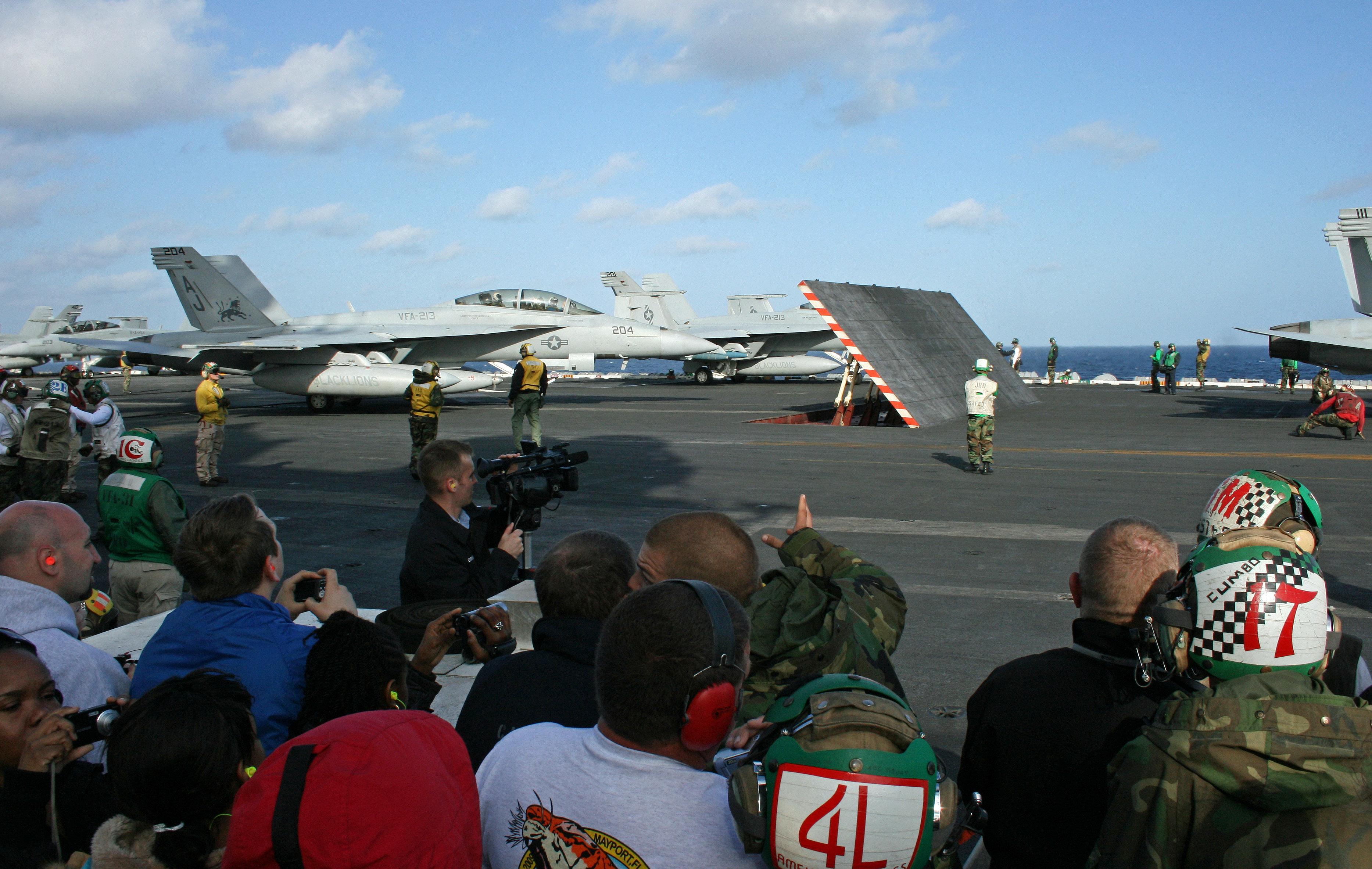 Slowly the fighter pulls up to the shuttle which has returned from the Hawkeye shot….the hold back bar is installed, the pilot tests all his control surfaces, all the colored shirts check the movements of the surfaces and you see some crossed arms. Immediately the pilot holds the aircraft as they announce that was a demo of the safety checks…..someone didn’t like the movements of the rudder so they put a hold on the shot. It’s not a group decision- anyone of the colored shirts can hold the shot and you realize the responsibility that these young sailors have. Once again the pilot tests all the flight control surfaces, all approve and indicate with a thumbs-up, the shooter indicates to take up slack in the shuttle, take the engine power up and kick in the afterburners, a final safety check, the pilot salutes, the shooter touches the deck and raises his arm pointing down the cat and the cat fires! You watch the pilots head and you realize that you’ve just seen a “E” ticket ride…it looks pretty darn violent…and is pretty darn noisy! 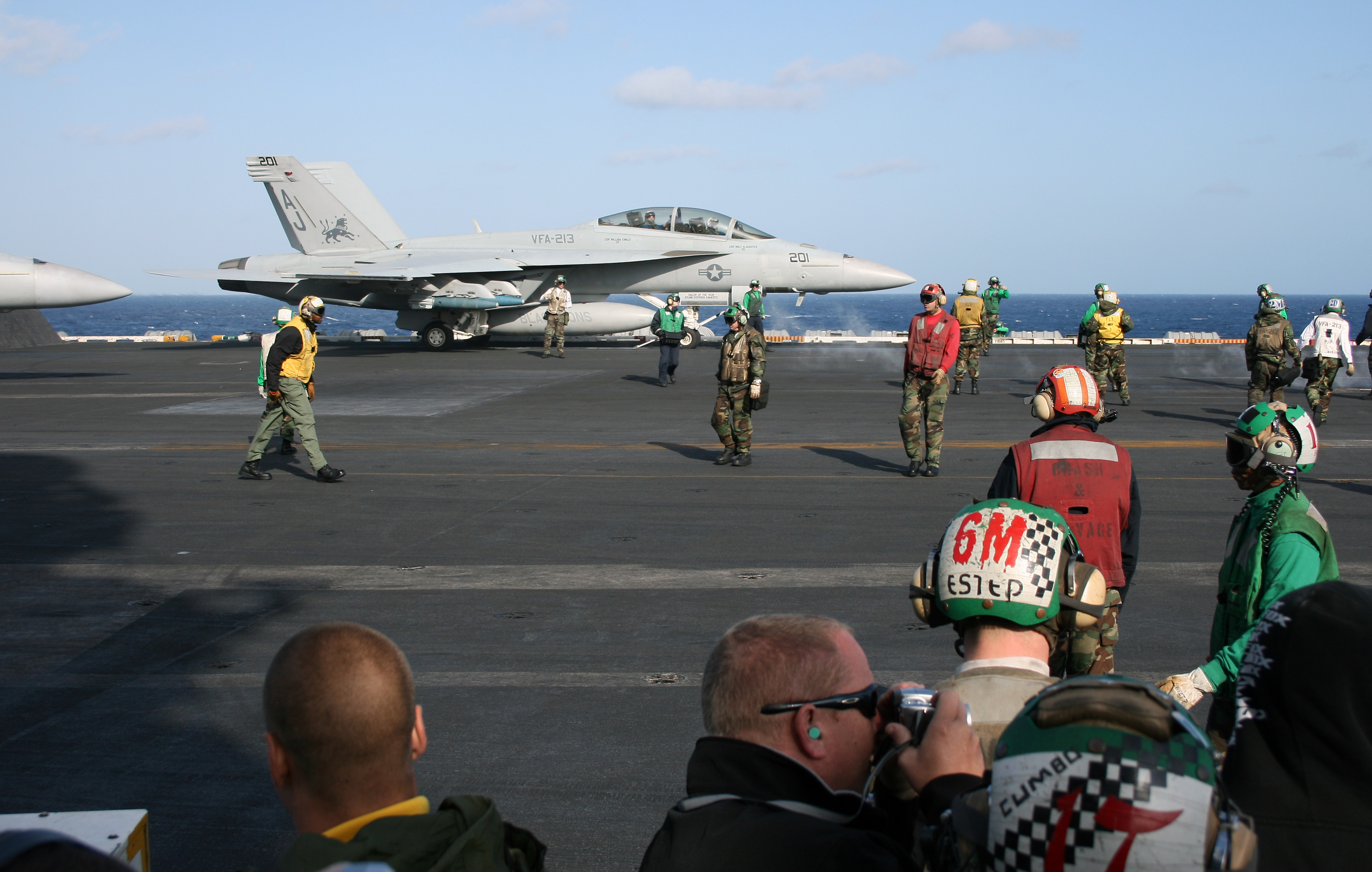 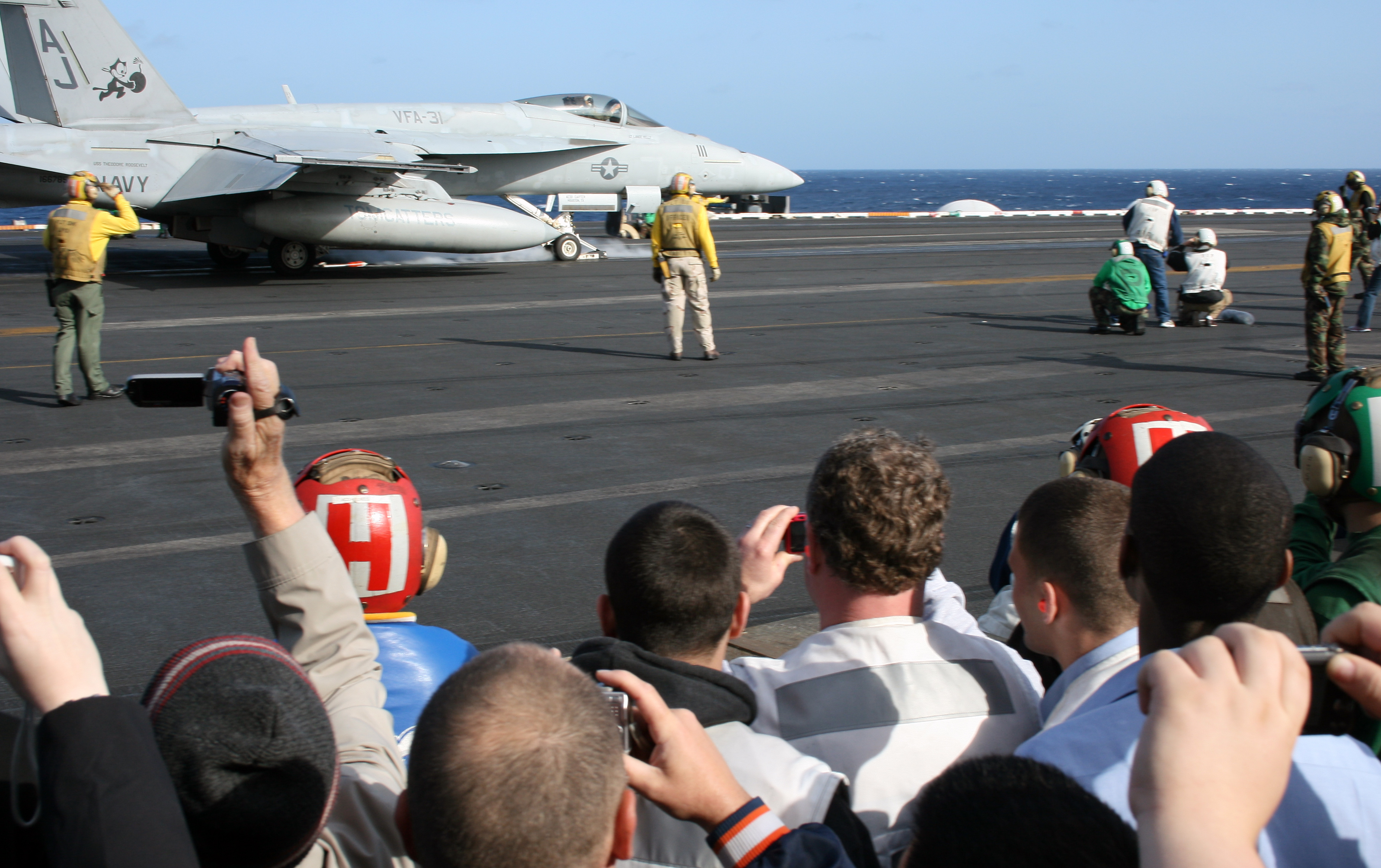 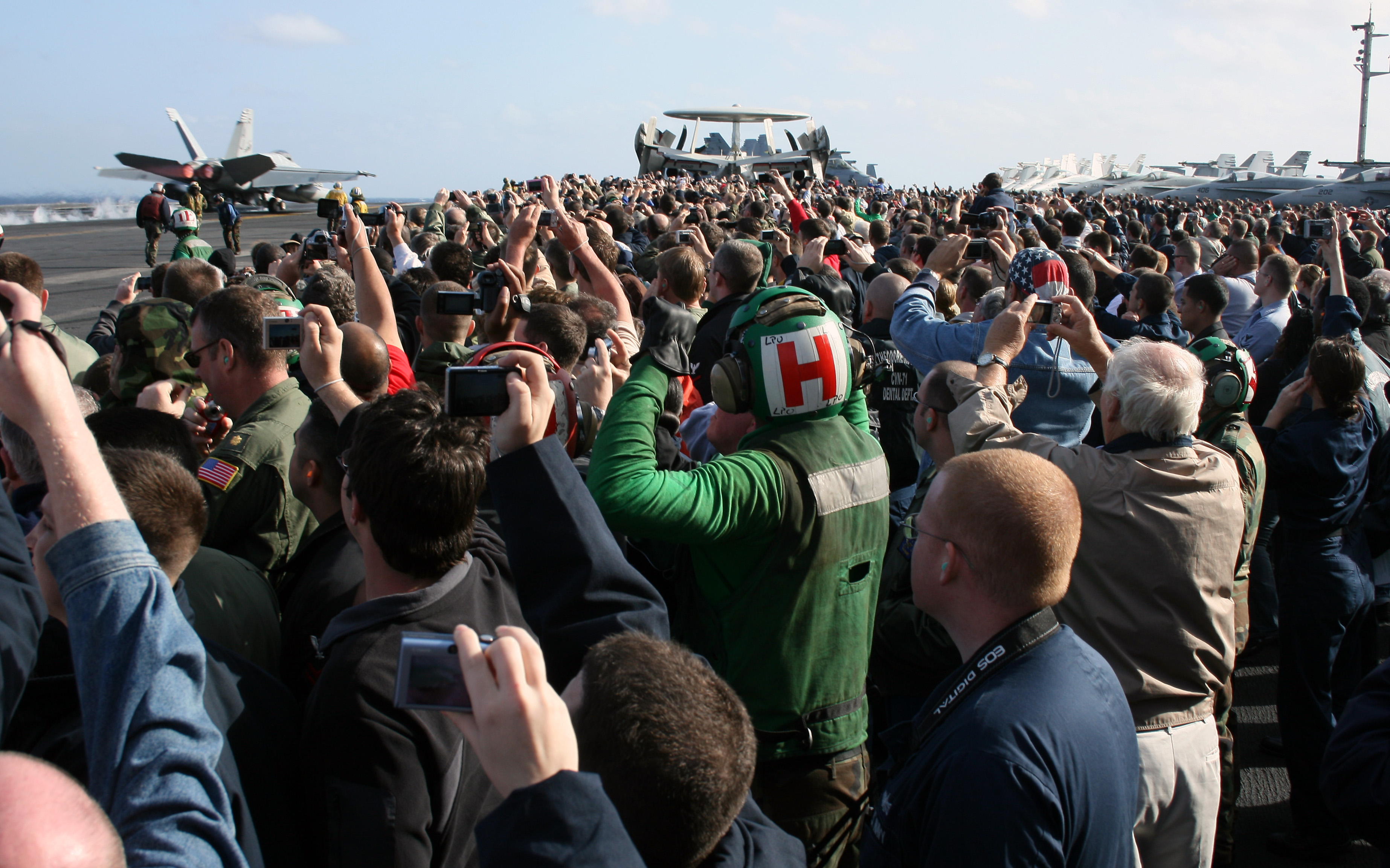